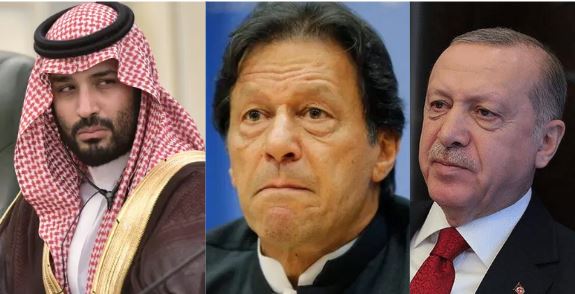 At a virtual meeting of the Organization of Islamic Cooperation (OIC) at the United Nations on May 19, Pakistan had undertaken a campaign, unsuccessfully so, to set up an informal anti-India working group within the OIC, to probe supposed Islamophobia rising in India. The working group, of course, would also work towards achieving the Kashmir narrative which Pakistan wants to propagate. However, Maldives thrashed the radical Islamist state left, right and centre for its brazen attempts at using the OIC as a platform to single out India and push its dirty agenda forward.

Reports now suggest that Maldives’ action at the virtual meet of the OIC was in fact, backed by Saudi Arabia and UAE. Further, Oman too took a clear stand in India’s favour at the OIC, saying that the discourse trying to be initiated at the OIC was a part of India’s internal affairs. UAE, while rejecting Pakistan’s demand, stated that forming of any new working group will only happen after it has been approved by all the foreign ministers of OIC member countries.

What led to this extreme isolation of Pakistan in an Islamic organization? The simple answer would be its growing proximity with another rabidly Islamist state, called Turkey. Turkey, under the rule of Recep Tayip Erdogan, has grown extremely warm relations with Pakistan in recent times, much to the dismay of Arab and Gulf nations, particularly the global Islamic hegemon – Saudi Arabia.

The Arabs have deserted Pakistan. Who would want to maintain relations with a poor and infamous nation, after all, whose only motive is to further Jihad against non-believers, particularly India? For them, Pakistan has turned out to be a grave liability, and they are now not considering their fellow Islamic nation anything more than a joke.

Saudi Arabia has been the de facto leader of the Muslim world in recent times, although historically it is not meant to be. Being an extremely rich and oil-prosperous country, all other Islamic nations happily toe the Saudi line. Among these nations was Pakistan, until recently. OPEC and OIC both are, if it may be said so, ruled by Saudi Arabia, followed by the UAE perhaps, as it chaired the OIC virtual meet on May 19. However, Turkey, under an overenthusiastic Erdogan, is incessantly irritating the Arabs, with dreams of reinvigorating the glory of the erstwhile Ottoman empire.

Erdogan has his plans settled. The man dreams of assuming the role of Caliph, and as such, aims at ruling the Muslim world globally, unseating Saudi Arabia from its present throne of influence. As such, Saudi Arabia and its allies, which include the UAE, have grown a particular disgust for Turkey, and any other nation lying prostrate before Erdogan, out of which one happens to be Pakistan.

Already considered a pariah among the major Muslim countries, Pakistan’s increasingly benevolent outlook towards Turkey has irked the Arabs like never before, who have made it their lives’ mission to destroy the dirty two-nation nexus of Pakistan and Turkey. Only recently, Malaysia was a part of the nexus too, but we’ll get to that in a bit.

Turkish involvement in the Libyan war puts it in loggerheads with UAE, which is in any case an ally of Saudi, and as such, a rival of Erdogan. Turkish involvement in Libya, particularly its efforts at air dropping Syrian jihadis into the country is something which outrages UAE. As a matter of fact, UAE has come on record, along with Cyprus, Greece, France and Egypt, to condemn Turkey’s role in the Libyan war. As such, UAE too has distanced itself from the regular and inconsequential shenanigans of Pakistan, who clearly, is Turkey’s servile ally.

#BoycottUAE was recently trending in Pakistan, as the fools that the country has in abundance were dismayed by the UAE’s wise reluctance to form a working group to probe India’s role in Kashmir. They somehow felt that Turkey would never ignore Pakistani efforts to rake the Kashmir issue internationally, unlike Saudi and UAE. The trend, needless to say, has irked UAE and Saudi Arabia, who have now taken it upon themselves to regularly humiliate Pakistan for the joke of a nation that it is.

Under Mahathir Mohamad, relations had peaked between Turkey, Pakistan and Malaysia, which were quite literally on the verge of announcing an anti-India alliance/axis, consisting of other smaller Islamic nations as well. However, with India choking the Malaysian economy, Mahathir kicked himself out of his office. Eversince, Malaysia, under its current PM Muhyiddin, has distanced itself from Pakistan and Turkey. The to-be grand axis, as such, has fallen even before inception.

Mahathir had organized the Islamic Summit in Malaysia last year, which Pakistan pulled out of in the very last moment, facing severe pressure from Saudi Arabia not to attend the same. Mahathir was basically trying to cook up a non-Saudi, non-UAE grand Islamic alliance, of which Turkey was a wholehearted partner.

India’s clout over the OIC is immense. From inviting Sushma Swaraj as a Guest of Honour last year, to now refusing to let an anti-India agenda be peddled in its lobbies, the OIC has proven to be an ally organization of India. Meanwhile, Pakistan joining the Turkish bandwagon, in complete contrast to Saudi’s wishes, is now beginning to show its effects, as the Gulf countries have begun isolating, and even dismissing Pakistan, while increasingly siding with India.