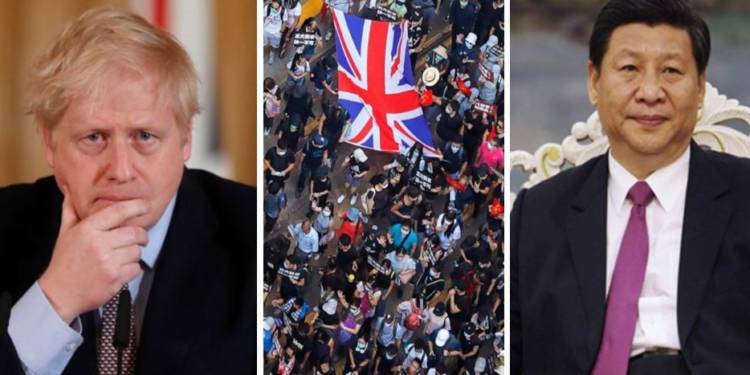 At a time when China is increasingly looking to quash the rights of natives of Hong Kong by bringing a highly controversial National Security bill- the United Kingdom, which in the first place had surrendered Hong Kong to China under the Sino-British Joint Declaration is nowhere to be seen. The least, the spineless British government can do for Hong Kongers in these torrid times is stand up and make China feel internationally obligated to the declaration which states that Hong Kong’s previous capitalist system and its way of life would remain unchanged for a period of 50 years until 2047.

After last year’s protests against the extradition bill which had metamorphized into massive pro-democracy protests, the CCP red authoritarian regime has come up with a national security bill which in essence would hand over the security power of the state of Hong Kong to China.

Through this legislation, Beijing plans to stop mass protests by banning acts of treason, secession, and subversion. But many experts have warned caution that the laws will be used to target critics of the government and threaten civil liberties as well as the city’s autonomy.

The legislation is also expected to enable Beijing to establish intelligence agencies in Hong Kong to feed its sinister motives.

Hong Kong’s police force is independent of China and if the legislation passes, the police will also come under Beijing’s thumb. Ostensibly allowing the CCP to cull any dissent and permitting it to form another puppet Chinese city.

The CCP is using the Coronavirus pandemic as a cover-up to bring the highly controversial bill that will undermine Hong Kong’s ‘One country, two systems framework.’

Although the UK did come out with a meek statement through its Foreign Secretary Dominic Rabb that 10 Downing Street was mulling on a proposal to give greater visiting rights to certain Hong Kong residents but it was not enough.

The certain Hong Kong residents Mr. Dominic was referring to in his statement are those Hong Kongers who possess a document known as the British National Overseas (BNO) passport, which was granted to residents who registered for it prior to Britain handing the colony back to China in 1997.

However, the measure in itself is weak and half-baked that the Chinese will not be threatened one bit. And the tragedy of the whole situation is that it was Britain and the UN that were played by the CCP to hand over the sovereign ruling rights of Hong Kong, Kowloon and the new territories to China.

Prime Minister Boris Johnson up until now has been uncharacteristically mum on the whole issue. He should have summoned the Chinese envoy by now who is toeing the line of Beijing and threatening the UK with counter-measures if the Tories go with the BNO passport proposal.

While the United States tried to approach the UN, Boris Johnson and his government have not shown any keenness on the matter. It will be a major blunder if the UK misses the train and lets China take control of the wheel of Hong Kong.

Meanwhile, the US has threatened to revoke Hong Kong’s special trade and economic status, under which the city is treated as separate from China.

Hong Kong is one of the biggest global financial hubs and one of the main reasons why China wants complete control over it. If the US goes ahead with this move, Hong Kong will be treated as part of China and we have seen what the trade wars have done to China.

Like Australia which of late has been taking the fight to China in the wake of the Wuhan virus pandemic, the UK should look to take a cue out of Kangaroo’s manual to counter Chinese influence and start attacking China through the diplomatic channels.

Australia depends heavily on China for trade but despite it, the Scott Morrison government has been at the dragon’s tail for an international inquiry over China’s role in the spread of COVID-19.

China’s expansionist policies have only been strengthened in the wake of the Coronavirus pandemic. From the South China Sea to India’s Ladakh, China is using the pandemic as an opportune moment to give flight to its skirmishes. It tried to intrude into the Indian borders but when Indian forces flexed its muscles a bit, the dragon tiptoed away.

The lesson from India and Australia for the UK is that all it requires is standing up to the Chinese. The CCP only knows scare-tactics but when it comes to actually slogging in the real battlefield—it cows away meekly.

Britain should summon the Chinese envoy in London and register a solid protest for the sake of the people of Hong Kong. The Britishers should push China to the edge by taking the issue to international bodies like UNSC and try to force Beijing to shelve the controversial bill. The world community is looking towards Britain to show some assertiveness and if it does not stand up now, Hong Kong will cede to China.

We thought Imran Khan would be the one to finish Pakistan’s economy. But he lost to locusts