We thought Imran Khan would be the one to finish Pakistan’s economy. But he lost to locusts 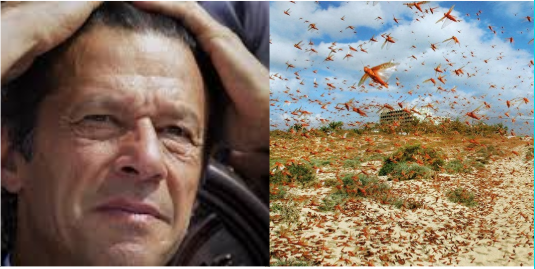 Pakistan, the country whose Prime Minister is running from one head of state to other with a begging bowl to save economy and payback debt, has now been hit by locust attack. The locust attack is expected to damage the Agricultural sector, which is the backbone of Pakistani economy. Pakistan might be hit by a famine and millions are on the verge of going hungry as the locust attack is estimated to do damage worth 600 billion Pakistani rupees, as per a report by United Nation’s Food and Agriculture Organization.

“This will be economically devastating for us as agriculture accounts for 20% of GDP and 65% of the pop­ulation live and work in agricul­tural areas. The fact that the lo­cust plague in Pakistan may wipe out livelihoods and worsen food security,” said Pakistan People’s Party Vice Pres­ident Senator Sherry Rehman.

Sindh and Balochistan- the two provinces where rural areas already face a massive food shortage and thousands of children sleep without proper two times meal, are the areas hit worst from locusts attack.

Around 38% of Paki­stan is now a breeding ground for the desert locusts and more than 140,000 acres of crops have been damaged in Pakistan alone since last April. Considering these grim reports, it is surprising that the federal government has not come up with an effective policy to tack­le this issue,” added Rehman.

This is the second wave of locusts attack in Pakistan. The swarms of locusts have already destroyed one crop-wheat- and if this crop is destroyed, the children of farmers will starve.

“Every farmer here used to reap about 100 to 200 bags of wheat, but all that has gone. The locusts have eaten it,” said Abdul Qadir, a farmer from Pashta Khan Moulla in Balochistan. He said there are at least 2,000 people in the village and all of them depend on income from farming. “If the locusts damage our cotton crop, our children will starve,” Qadir added.

The Indian government has already taken up the matter with Pakistan and Iran, on whose desert areas locusts are breeding, and suggested a coordinated response. The Indian government agreed to supply pesticides to these countries. “This year, in addition to the Covid pandemic, a new challenge is facing the people of the South Asia and South West Asia region is that of Desert Locust …” said an official. “India has suggested to Pakistan that both countries coordinate locust control operation along the border and that India can facilitate supply of pesticide Malathion to Pakistan,” the official added.

Iran has agreed to cooperation but Pakistani officials are yet to respond, after a week of communication. For decades India and Pakistan have jointly fought against locusts and this has helped both countries, but this time Pakistani officials have not responded yet.

In the last few years, agricultural growth of Pakistan has been severely hit. Last financial year it grew at mere 0.8 percent against 3.8 percent target; and this will severely hit the standard of living in the Islamic country as agriculture is the main source of income for the majority of the population.

In the last three seasons, the Pakistani farmers have not seen a single good crop, and Imran Khan, who presided over all three seasons- elected in August 2018-, has done nothing to soothe the farmers so far. If the farmers are hit by locusts attack this time, millions of Pakistanis will not get even two times meal a day.

‘D10 can destroy Huawei 5G,’ Britain wants alliance of 10 democracies including India to take on China