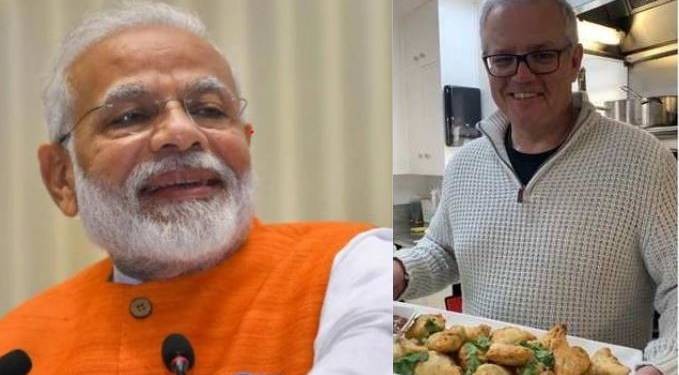 What is cooking between India and Australia? A cursory look at Australian Prime Minister Scott Morrison’s twitter handle reveals Samosas- a famous Indian delicacy. In fact, Morrison tweeted, “Sunday ScoMosas with mango chutney, all made from scratch – including the chutney! A pity my meeting with @narendramodi this week is by videolink. They’re vegetarian, I would have liked to share them with him.”

Sunday ScoMosas with mango chutney, all made from scratch – including the chutney! A pity my meeting with @narendramodi this week is by videolink. They’re vegetarian, I would have liked to share them with him. pic.twitter.com/Sj7y4Migu9

Prima facie, this might look like an act of personal courtesy between Morrison and Prime Minister Modi but if surrounding circumstances in the backdrop of the ongoing Coronavirus Pandemic and Australia’s bold offensive against China are taken into consideration, the Australian Prime Minister’s ‘Samosa diplomacy’ would seem nothing less than a brave plan to take on Beijing with New Delhi’s help.

Canberra wants closer ties with New Delhi in the midst of the former’s offensive against Beijing, even though Scott Morrison has a lot to lose in this battle if things go wrong. Australia enjoys a massive trade surplus over China, and the beneficial trade equations stand jeopardised as Beijing has started imposing tariffs aimed at Australian goods.

Moreover, Morrison faces extensive Chinese influence within the University campuses and Opposition-ruled states like Victoria and the Northern Territory. Yet Australia’s Prime Minister is taking on China- he and his Cabinet Ministers have remained critical of China’s wet markets, apart from demanding Taiwan’s inclusion in the WHO and seeking an independent international prove into the origins of the COVID-19 outbreak, that is, the Wuhan Institute of Virology.

In this entire calculus, India figures prominently in Australia’s plans to take on China. Australia has traditionally attached greater importance to the Pacific, while New Delhi looks at itself as an Indian Ocean power. But Australia wants to realign and build a partnership that overcomes this perception gap, and the COVID-19 outbreak has only enhanced this sense of recalibration for Australia.

At the root of Indo-Australia cooperation is, of course, counterbalancing Chinese influence even though their respective perceptions driving attempts to cut the Dragon to size are different.

For India, China is a massive neighbouring country, with which it shares a long boundary riddled with unresolved border disputes that lead to scuffles and face-offs every now and then. India naturally looks at China as a hawkish power with which it went to power, and with whom its borders are still not properly delineated.

India wants freedom of navigation and flexibility in its strategic choices in the Indian Ocean Region (IOR) which New Delhi views as an area of its traditional influence.

At the core of Australia’s outrage against China’s mishandling of the COVID-19 Pandemic is the opacity that drives political affairs in Beijing. New Delhi does share Australia’s democratic bias, but for India it doesn’t matter if China remains a One-party, autocratic State or it becomes a democracy.

Scott Morrison is the only global leader who is actually putting his everything at stake to counter Chinese influence. Unlike Trump and other leaders who have economic and strategic gains to make, Morrison has nothing to gain out of a backlash against China except his commitment towards the cause of democracy and openness.

And this is why Australia wants greater presence near China- in the Indian Ocean to be precise. And India, the wold’s largest democracy, offers this strategic location to Australia. The two countries have come closer in terms of maritime cooperation as a part of the Indo-Pacific strategy.

Maritime collaboration between India and Australia is a key factor within the Quad (India, Australia, Japan and the United States). And there are discussions about India and Australia looking to seal a pact on mutual use of two strategically located islands- India’s Andaman & Nicobar Islands and Australia’s Cocos Islands for military purposes.

This will allow India to access the strategically located Island to the South-east of the Strait of Malacca while Australia will get to enhance its presence in the Indian Ocean Region (IOR).

Prime Minister Modi and his Australian counterpart are set to hold a virtual meeting on June 4, and with his ‘Samosa diplomacy’, Scott Morrison has really set the framework for closer and sharper Indo-Australia maritime collaboration to counter Chinese influence.