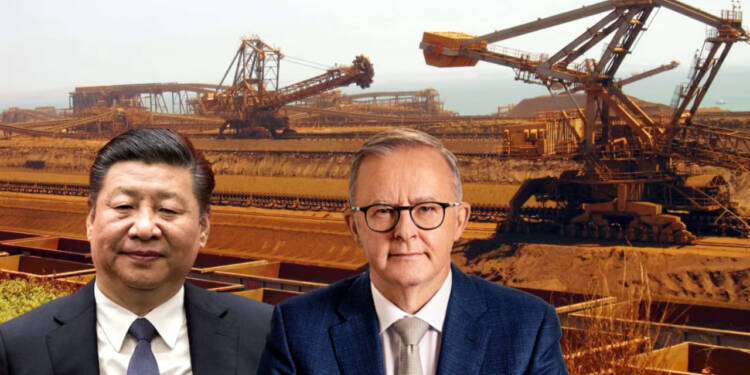 China is the world’s largest importer of iron ore with its whopping 1 billion-tonne-a-year steel industry absorbing about 70% of global production, most of which comes from Australia. So, China eyes its heavy reliance on Australia for iron-ore as a ‘strategic weakness’ and has been struggling to make efforts and now is determined to end this weakness. These efforts of China never came to fruition when Morrison was in power. But, now that the exit of Morrison has been announced and Anthony Albanese has taken office, it’s easy for China to realise its dreams under a pro-China government.

China finds a way out

China is certainly aware of the weakness of its position right now and it does not want to be in it forever. So, China has found a way out and has come up with a guideline for a centralised iron ore company that will be overlooked by the CCP itself.

Under the Morrison, who was a China-hawk, Australian iron-ore exports were diversified to many other countries but now when a pro-China is in power, China has seen an avenue for a major share of the export.

Meanwhile, citing its heavy dependency on Canberra, China has turned up with an initiative to consolidate iron-ore imports through a centrally controlled group by the end of this year. This initiative could fend off CCP’s ‘strategic weakness’. Beijing hopes the new entity will help China secure lower prices for their large bulk purchases on the company’s behalf.

Now, China is turning things in its own favour. China will soon leave the world’s biggest iron-ore exporter with no one to turn to when it comes to serving the world’s largest market. This can be termed an intelligent move by the CCP to gain heavy discounts from Australia. Also, Beijing could reduce its dependency on iron ore and blackmail Canberra that it can turn to Brazilian producers such as Vale.

According to the government officials and policy advisers, Xi’s administration had grown frustrated by large price swings over recent years in an industry dominated by Australian producers such as Fortescue Metals Group and BHP, which are likely to be highly concerned by the move.

So, China is now all set to mould the Australian iron-ore exports its own way. China has found a way of punishing Canberra amid worsening diplomatic relations. Australia has no other option but to fall into CCP’s trap and resume Canberra’s journey of becoming a Chinese client state.