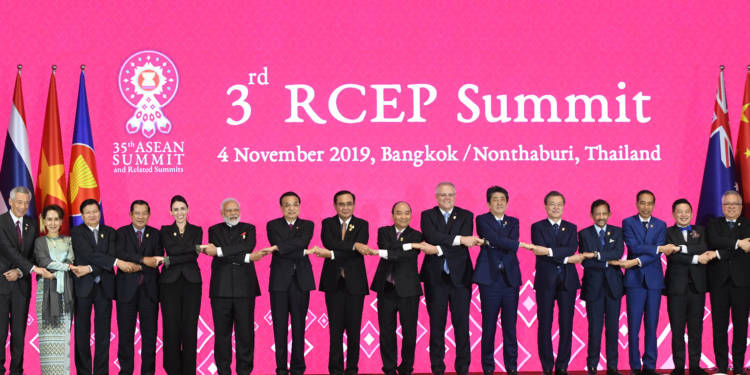 When India opted out of the Regional Comprehensive Economic Partnership (RCEP), Beijing was claiming that it would move forward, with or without India. But in the post-COVID context, the Dragon has realised that it cannot move ahead without India and the RCEP is a dead deal without New Delhi.

Chinese Vice Minister of Commerce Wang Shouwen has recently said that China will welcome India back to negotiations on the RCEP.

RCEP countries have tried to woo New Delhi into RCEP negotiations by offering it the option of deferring commitments related to opening up its market. India had opted out of RCEP negotiations due to the concerns of domestic businesses about the trade agreement.

But other countries have refused to go ahead without India, because they have realised the perils of being stuck in a trade bloc with China being the only giant.

Beijing has become infamous as an irresponsible power that abuses its economic prosperity and that is why the RCEP members want to bring India back on the negotiation table.

In fact, Vangelis Vitalis, Deputy Secretary at New Zealand’s Ministry of Foreign Affairs and Trade told a Parliamentary Select Committee, “What we are trying to do along with other RCEP colleagues is to try to find a way for there to be an on-ramp that allows India an accelerated way back into the agreement.”

He added, “The message from India has not been very encouraging but from a New Zealand perspective we would like to find a way for India to be a participant.”

New Zealand is desperate for India’s presence in the RCEP, but then it is not Wellington alone that fancies India’s presence at what is being touted as the world’s largest trading bloc, if and when, it materialises.

Even Thailand wants India to be a part of the RCEP. In February, Thai envoy to India, Chutintorn Gongsakdi, in an interview with Hindustan Times, said that any deal on the RCEP, which doesn’t include India will not be worth it.

Last year, Japan had dealt a severe blow to China’s ambitions of finding itself at the centre of an Asian trade bloc. Japan had made it clear that if New Delhi did not join the RCEP, Japan would not join either.

Things have gone further downhill for the RCEP free trade deal this year, as several countries, both big and small, seem to be having issues with China at an individual level.

Take for instance Australia whose relations with Beijing are at an all-time low following the former’s demand for an independent international investigation into Coronavirus origins and the latter’s imposition of steep tariffs on Australian goods.

Canberra will have reservations in joining a trading bloc with Chinese hegemony, and at the same time India has emerged as a key economic and strategic ally for Australia. This is why Australia would want one of its closest friends, India in the RCEP.

Within Asia, China has picked up a fight with South Korea over deployment of the US THAAD (Terminal High Altitude Area Defence) system in the country. China has re-iterated its objections following replacement of the old interceptor missiles with new ones at the US base in South Korea.

South Korean steel companies- POSCO and Hyundai Steel have also been looking to invest in India amidst exodus of foreign companies from China, and the ongoing tussles between Beijing and Seoul are only going to push it further.

When it comes to the ASEAN countries, which are principally at the centre of the RCEP, they too have been going through a rough patch in terms of their China ties. At the root of deteriorating ties is the South China Sea disputes.

Indonesia, for example, has rejected China’s claims in the strategic waterways and has also raked up the 2016 case of Philippines v. China (South China Sea Arbitration), in which the Permanent Court of Arbitration at The Hague had ruled in favour of Philippines while observing that China had no historic right to the area based on the “nine-dash” line theory on the basis of which China encircles 90 per cent of the disputed maritime region.

Circumstances have changed drastically, and even the Philippines and Malaysia seem to be distancing themselves following China’s aggression in the South China Sea.

China, on its part, knows that the RCEP Free trade deal is all but over without India’s participation. None of the prospective members is ready to let the Dragon grow more powerful and hawkish than it already is by gifting it a trading bloc that gives China unrestricted access to prolific markets in their countries.

These countries want to balance out China’s influence by including India in the RCEP trade deal, and Beijing is ready to woo India in order to ensure that the RCEP survives.

As for India, it had its own reasons to dump the RCEP- protection of domestic agriculture and allied activities from competition of Australian industry and the fear of becoming a dumping ground for cheap Chinese products that could further inflate its trade deficit with China.