The people of Nepal know better 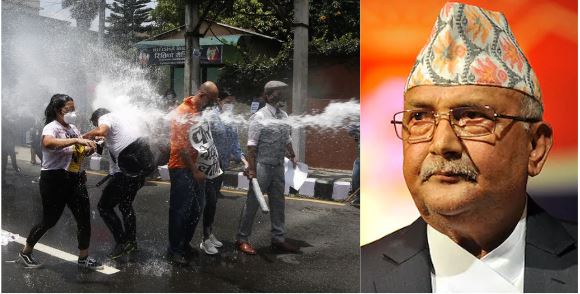 As Nepal descends into chaos due to the outbreak of Coronavirus, Prime Minister K P Sharma Oli has continued to blame India instead of preparing to fight the virus. Sharma’s speech in the Nepalese parliament has been full of anti-India rhetoric over the border dispute and spread of the virus.

“Eighty-five per cent of the people who tested positive for coronavirus in Nepal are those who returned from India. With the start of the movement of people from India, the number of coronavirus cases doubled in just one month in Nepal,” he said in the Parliament on Wednesday.

However, the well-informed Nepalese people are aware that criminally incompetent Oli government is trying to shift blame on India in order to get a free pass. And therefore, the city of Kathmandu erupted into protest.

In a peaceful protest, thousand of Nepalese citizens held placards, asking their government if they could not test and treat people then for what the citizens are being taxed.

“The economy is in shambles, the government has pushed our health and the health system in crisis, and they have been ineffective and incapable,” Jagannath Lamichhane, a mental health expert who took part in the protest, told Agence France-Presse (AFP).

So far, more than 5,000 people have tested positive with the virus and 14 have died, as per official estimates. Nepal government had enough time to prepare for the response to the outbreak as the country started reporting cases very late. But, the government, busy with irredentism by claiming lands of Nepal’s natural ally- India, did not prepare itself for the Coronavirus.

The citizens are demanding for more RT-PCR tests as the cases increase, but, the Nepalese government is holding very few tests- 1 lakh total on approx 3 crore population, India is holding more tests every day- per million population compared to global average or even neighboring countries like India.

“The government had time and could have prepared much better. We were there to call on the government to do better,” photographer Prajwal Bhattarai, 29, who was among those arrested, told AFP by telephone.

Nepalese PM is busy asking India to return its territory (which was never Nepal’s and there had never been a dispute over this land before Communist Oli came to power) instead of looking after Coronavirus response.

“Our territory should be returned,” Oli said a day after his government tabled a bill in the House of Representatives, the lower house of parliament, to amend Nepal’s Constitution to include the disputed regions of Limpiyadhura, Lipulekh and Kalapani in its official map.

“We will seek a solution through diplomatic talks on the basis of historical facts and pieces of evidence. And that means our territory should be returned,” he added.

Oli, who failed on economic and administrative front, is using irredentism to fool the people. He is trying to shift the blame on India and provoking the citizens against Nepal’s all weather ally-India, in order to save his chair. However, the people of Nepal are well-informed and they have taken to the streets for peaceful protests.

Of late, Nepal has been showing signs that under the communist regime, the former Hindu kingdom is fast turning into a client state of China. The government is blatantly controlled by the CCP which is further enabled by the communists and Maoists within Nepal.

Oli, short-sighted by his misplaced beliefs about communism, is playing into the hands of Beijing. It is not in the interest of Nepal to become China’s client state, especially because nearly 6 million Nepalese citizens live and work in India, bringing huge remittances for the Himalayan country.

It’s Japan vs China: As Shinzo Abe makes his opposition clear, Xi Jinping’s visit to Japan is all but cancelled