Love in the time of Corona: China and EU are truly, madly and deeply in love with each other 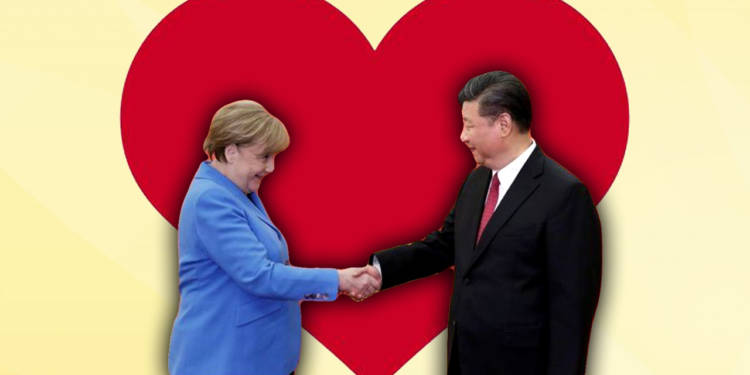 On Tuesday last week, the European Union held the 10th round of China-EU high-level strategic dialogue amid the Coronavirus pandemic. China and EU look forward to complete a sweeping bilateral investment treaty by the end of this year, as they hold the 29th round of the negotiations in May this year despite the pandemic.

After German Chancellor Angela Merkel ruled out the sanctions against China and said that the European Union would seek cooperation rather than confrontation with the Communist government, Chinese propaganda tools- CGTN (China Global Television Network) and Global Times, are hailing EU’s pragmatism.

German Chancellor Angela Merkel, who is also the de facto leader of the European Union, is a very shrewd negotiator and she understands that the EU could get a beneficial deal from the PRC if the block stands with the dragon amid the pandemic and the resultant global backlash.

Read: The European Union is with China but Europe is not. They are as anti-China as the rest of the world

Most countries around the world, led by the United States, directly or indirectly want to hold the Communist government accountable for the full-blown Coronavirus pandemic. The PRC is left with very few friends in the world, and whichever country or block stands with the dragon in these testing times, would get a favorable deal. This is the reason why the European Union is swimming a counter-current while the rest of the world moves away from China.

The economic prowess of the PRC has a significant impact. China is the largest economy in terms of GDP (based on Purchasing Power Parity or PPP), the second-largest in terms of GDP (based on market rates), the largest trading nation; and above that it is a nation with dollar reserves of 3 trillion dollars. So, China has the undoubted capacity to offer favorable trade and investment deals to any country.

The European Union wants to capitalize on this opportunity and get a favorable deal by the end of this year. Before the pandemic broke out, China had an upper hand in the deal, but, now, as China is left with very few powerful friends, the role is reversed with the EU placed in the dominating position at the negotiating table.

Therefore, China is negotiating investment deals despite the fact that most EU countries have blocked Chinese investment in strategic sectors. Now, the EU is negotiating the deal on its own terms and has asked China to bring market reforms, end subsidy to state-owned companies, and many more steps on which the Communist government had not agreed to earlier.

Read: The European Union is over and Donald Trump is done with them. All the US needs now, is India

Considering how Chinese propaganda tools are hailing EU’s “pragmatic approach”, it does seem that China would give up to these demands. EU desperately needs investment and a favourable trade deal from a large economy like China to save its economy which is expected to shrink by double-digit rates in the ongoing calendar year.

The EU-China investment deal is supposed to benefit both parties as the Xi Jinping could boast that it still has powerful friends as the US and Trump get busy turning the whole world against the Communist government, and EU, which desperately needs favourable trade and investment deal to survive, would get one.

On Saturday last week, just a day before US Secretary of State Mike Pompeo was supposed to hold a video conference with 27 EU countries foreign ministers, EU High Representative for Foreign Affairs Josep Borrell called for a “big, positive agenda for EU-China cooperation.”

He said that the EU won’t ally with the US against the Communist Party’s regime. “Amid US-China tensions as the main axis of global politics, the pressure to ‘choose sides’ is increasing,” he said. “We as Europeans have to do it ‘My Way’, with all the challenges this brings.”

Read: ‘China lied to us,’ European Union wrote a scathing report, then removed all criticism after Chinese threats

He further added, “China is playing an ever-growing role in global politics, and we have a great interest in working together on the many issues where its role is essential, from the recovery of the pandemic to climate change and sustainable connectivity.

The emphasis on connectivity has a significance given the fact China is investing in infrastructure projects of many European Union countries.

The Chinese foreign minister Wang Yi told Borrell in a meeting last week, “With cooperation and consensus always greater than competition and differences, China and the EU are long-term, comprehensive, strategic partners,”

Read: After the world is done with China, the European Union must be targeted for being the devil’s friend

The question now is, how far will this opportunistic friendship go? Will the European Union continue to be the devil’s advocate even in the long run? Only time will tell.