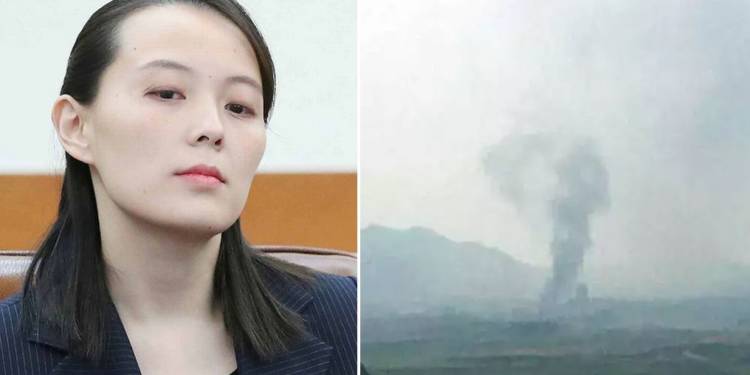 The Korean peninsula has once again lit up with a possible military conflict. Upping the ante on its aggression against South Korea at the Korean border, Kim Jong-un led North Korea has blown up a liaison office which has been a symbol of changing South-North relations over the years. The inter-Korean liaison office was set up in the industrial town of Kaesong in 2018 and was being used for communication between both sides with around 20 staff members from both North and South Korea.

In 2019, North Korea announced withdrawal from the office on the backdrop of a failed summit with the United States. Now, Kim Yo-jong, the younger sister of North Korean leader Kim Jong-un, and current in-charge of South Korean affairs has decided to blow up the office which stood for easing tensions in the Korean peninsula. North Korea has blamed South Korean defector groups, who have been sending propaganda leaflets through the border with North Korea for its immediate action.

However, according to Duyeon Kim, a senior adviser at the International Crisis Group, a Belgium-based independent non-profit organization, “The leaflets are an excuse or justification to raise the ante, manufacture a crisis, and bully Seoul to get what it wants.”

Amid the growing escalation on the peninsula, the rise of Kim Yo-jong is important. Jong has been handling the ruling party’s propaganda machinery since 2014 and was elevated as an alternate member of party politburo in 2017. In 2018, she visited South Korea in the winter Olympics. Now, she is considered number 2 in the country and successor of Kim Jong-un.

After she returned from the visit to the South in 2018, the relations between North and South Korea have only worsened. And blowing up of the liaison office shows that relation on the Korean peninsula has hit a new low.

“North Korea’s violent destruction of the liaison office at Kaesong is a symbolic blow to inter-Korean reconciliation and co-operation,” said Leif-Eric Easley, a professor at Ewha University in Seoul.

“It’s hard to see how such behaviour will help the Kim regime get what it wants from the world, but clearly such images will be used for domestic propaganda.”

According to analysts of the region, North Korea is creating a crisis due to it wants to increase leverage in the nuclear negotiations. Another reason behind escalation could be stimulus by the Chinese government to North Korea to create a crisis to divert the global attention from Coronavirus and engage the United States in these issues instead of focusing on anti-China build-up.

North Korea said that its army is ‘fully ready’ to move against South Korea if the defector groups did not stop sending leaflets. Pyongyang also decided to cut all the communication with South Korea. North Korea also threatened to send the military in the demilitarized zone to which South Korean defense ministry spokeswoman Choi Hyun-soo responded by saying “Our military is maintaining readiness posture to be able to respond to any situation.

In the last few months, North Korea has suspended all cooperation with South Korea. The experts pointed out that Kim Jong-un is unhappy with lock of progress in negotiations over the North Korean nuclear project. North Korea wanted to lift economic sanctions for the partial handover of nuclear capabilities, to which the United States had not agreed.

It must be noted here that South Korean per capita income is at least 30 times more than that of the North; while the North is suffering from food crisis amid the ongoing pandemic, the South is a developed country with every citizen having access to basic public goods live with dignity. Pyongyang wanted economic cooperation between both countries to develop projects which could make north better off, but these could not go forward due to American sanctions.

The economic condition in North Korea is worsening and therefore, Pyongyang is upping the ante at the border to bring the United States back on the negotiation table and deal with them from a position of strength. North Korea has also threatened to scrap the bilateral peace agreement signed between two sides in 2018.

Love in the time of Corona: China and EU are truly, madly and deeply in love with each other