Russia has been able to sell its S-400 air defence system despite hammering Turkey in Syria and opposing its crusade in Libya. 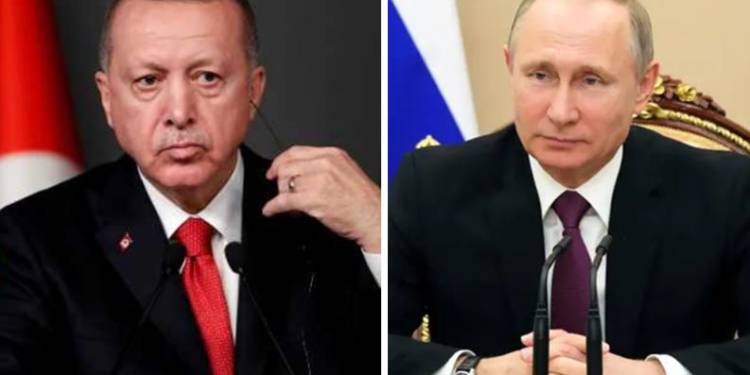 Turkish President Recep Tayyip Erdogan has been bullying the entire European Continent over the Libyan crisis. The President of the rogue State blackmails the European powers with the threat of opening the floodgates of Syrian refugees into the Continent. But there is one man he cannot bully- Russian President Vladimir Putin.

Erdogan maybe bullying Europe over the Libyan crisis, but he cannot overpower the Russian President in Libya. Putin is backing the Libyan National Army leader, Haftar in the North African country. On the other hand, Erdogan is backing the highly Islamist and UN-backed GNA in Tripoli.

Every time Europe or the Arab world led by Saudi Arabia tried to calm tempers in Libya, Ankara did not bother and continued violating the UN arms embargo on the Libyan civil war.

However, Erdoğan’s interactions with Putin have been far more mollified and timid. As opposed to general Turkish belligerence, Ankara has been talking in terms of ceasefire and truce in Libya when it interacts with Moscow.

Russian backed fighters are firmly backing Haftar and Moscow is also believed to be supplying arms to Hafter along with Egypt. If Moscow reins in an expansionist Turkey in Libya, then it will certainly not be the first time that it did so.

Putin has given deadly blows to Erdogan in the past. Last year, for example, Russia and Turkey were engaged in a proxy war in North-western Syria or Idlib.

While the Russia-backed Assad regime in Syria wanted to regain effective sovereignty over Idlib which was held by Turkey-backed rebels, Erdogan wanted to invade parts of the western governorate of Idlib and northwestern Syria which was held by the Kurds, to grab Syrian territory on the pretext of creating a “safe zone” for Syrian refugees.

Turkey stepped up an offensive after the Trump Administration’s decision to withdraw US forces from Syria and abandon its Kurdish allies. Putin however had some nasty plans to weigh down the Turkish President.

The Kurds, who were being tormented by Ankara’s Jihadist mercenaries, announced a deal with the Syrian government brokered by Russia effectively aligning themselves with the Russian geopolitical interest.

With the Kurdish-Assad deal, Putin was able to step up the heat on Turkey. Russia reserved most of the Turkish advances in Syria. Earlier this year, 33 Turkish soldiers were killed in Idlib during an assault by the Assad regime forces.

The Russian Defence Ministry had issued a statement according to which the Turkish soldiers were killed in a “bombardment” while operating alongside “terrorists”.

Erdogan visited Moscow to meet his Russian counterpart days after the deadly attack on Turkish soldiers. The meeting showed how the Turkish President prostrates before Vladimir Putin.

For starters, Erdogan was kept waiting for two minutes before Putin met him. Moreover, the Turkish delegation appeared in front of a portrait of Aleksandr Suvorov, a Russian commander who had humbled the erstwhile Ottoman empire across several battles.

This was seemingly supposed to embarrass the Turkish delegation led by Erdogan himself. It also brought to the fore a history of acrimonious relation between the radical Islamist Ottoman empire and the Russian empire that was dominated by orthodox Christians. And that too days after Russia-backed Syrian government forces killed 33 Turkish soldiers.

This however wasn’t the only time that Russia humbled Turkey. Moscow has a strategic axis of convenience with Turkey. Russian policymakers exploit Turkish relationship but Putin weighs Erdogan down when the latter tries to punch above his weight.

Even in 2015, Putin had prevailed when Russia and Turkey crossed swords. Ankara had shot down a Russian fighter jet that had crossed into Turkish territory. Erdogan had jumped in to claim credit for shooting down the fighter jet.

Putin’s reaction however was firm. He punished Turkey by reducing the number of tourists visiting the country and also imposed restrictions on Turks travelling to Russia. Ripped apart by Russian sanctions Erdogan had apologised for the misadventure by June 2016.

Russia knows that Turkey is merely a token NATO member. Erdogan has alienated both Washington and the European Union. Thus, it has no else but Russia to rely upon. Turkey needs Russian military supplies even if they come at the cost of losing favour with the West.

Russia has been able to sell its S-400 air defence system despite hammering Turkey in Syria and opposing its crusade in Libya. The Russian delivery of S-400 to Turkey also meant that Erdogan lost the opportunity of acquiring the F-35 aircraft jets from the US.

Losing the F-35 jet deal was a major setback for Turkey as it was also a co-producer of the next-gen aircraft that would have allowed it to reap millions of dollars through exports.

Erdogan is a bully that Europe has a hard time controlling. But when Putin decides to take him on, Erdogan fails to find answers. And Putin could do rein in the wannabe Khalifa all over again- this time in Libya.

George Floyd’s killing caused outrage across the world, but no one cares about White farm murders in South Africa