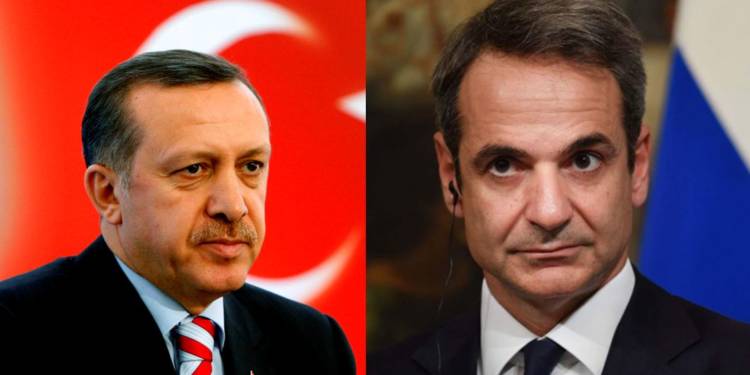 The Eastern Mediterranean has been rocked by rising tensions between an Islamist, expansionist Turkey led by its President Recep Tayyip Erdoğan and the Cradle of Western Civilization, Greece. When Turkey was praying in Hagia Sophia, Greece was in mourning, Church flags were flown at half-mast, and Church bells tolled in Greece as Turkey conducted Islamic prayers in the Byzantine era cathedral, now turned into a mosque.

This has worsened animosity between the two nations but the threat that Turkey poses to Greece goes well beyond these religious and cultural differences. Greece has issued a naval alert after Ankara announced that it was sending a vessel to carry out a drilling survey in waters close to a Greek island South of Turkey’s coast.

The Turkish alert called NAVTEX- an acronym for Navigational Telex has caused alarm in Greek military circles. Athens suddenly finds itself in an awkward position, being unable to do much about the Turkish advance. It is primarily because of two errors that Greece has landed at the receiving end of an expansionist Turkey- one, Athens did not react when Turkish belligerence really started and two, Greece’s ‘no-first-fire-policy’ which allows Erdoğan to bully Greece in its own backyard.

The NAVTEX is making news now. But it is Greece which has been slow to act. Erdoğan issued several NAVTEX last year with the Aegean Sea at the back of his mind. Turkey started issuing them as early as March 2019. And then in the months of July and September last year, two more NAVTEX were issued by Turkey for conducting military activities. The NAVTEX reserved large swathes of area South of the island of Kastellorizo which falls within Greece’s continental shelf.

Greece should have knocked the doors of the United Nations (UN), the European Union (EU) and the National Atlantic Treaty Organisation (NATO) much earlier when Turkey was violating its maritime sovereignty. Now, Athens wants to approach supra-national organisations, but it is too late by now.

By remaining in hibernation throughout 2019 and the first half of this year, Greece has emboldened Turkey. Erdoğan is walking the talk and stepping up Turkey’s drilling and exploration operations.

Now, Greece is protesting against the Turkish incursions. But it hardly matters. Turkey couldn’t be pre-empted due to lack of enthusiasm from Athens early on. Now, the dispute has moved onto the second stage and Greece will have to confront Turkey by itself. Even within Greece, it is now being believed that the US and EU won’t help in case of a conflict with Turkey.

The other mistake that Greece is now committing is its ‘no-first-fire-policy’. The Greek military is posturing for a conflict. As per latest reports, Greece’s Navy has deployed ships in the Aegean Sea as a part of “heightened readiness”.

A Greek source told AFP, “Navy units have been deployed since yesterday in the south and southeastern Aegean.”

The Greek officer further said that the units “are ready to respond to any activity.” Meanwhile, the Greek Foreign Ministry has said, “We call on Turkey to immediately cease its illegal activities, which violate our sovereign rights and undermine peace and security in the region.”

Greece is not really responding to Turkish provocations. What Athens is doing is plain and simple military posturing, in the face of a hostile Turkey. This ‘no-first-fire-policy’ is antagonistic to Greece’s sovereign interests. The message that Greece is giving is that it is ready for a conflict. Athens is waiting for Erdoğan to make the next move. But the Turkish President is already getting to do what he wants- drilling and exploration in Greece’s Continental Shelf.

Athens must realise that there is no point in waiting for another provocation. Turkey has already made the biggest possible provocation by encroaching into Greece’s territorial waters. Military posturing cannot achieve any real object for Athens, because the Turkish survey ships will carry on with their research activities anyway. Military posturing helps in the run-up to a battle, but when the battle has actually started, it is the fighting that helps.

Greece doesn’t have to be bullied around by Turkey. Athens must realise that Erdoğan has very tactfully achieved what he wanted- exploration without having to go through a conflict. Greece cannot keep waiting and posturing indefinitely, it must make a move and make it immediately.