‘If you can’t beat them, bury them,’ After being beaten by UK in trade deals, EU tries to bury it under a £160 billion debt pile

Iain Duncan Smith said, "Buried in the fine print, unnoticed by many, is the fact we remain hooked into the EU’s loan book." 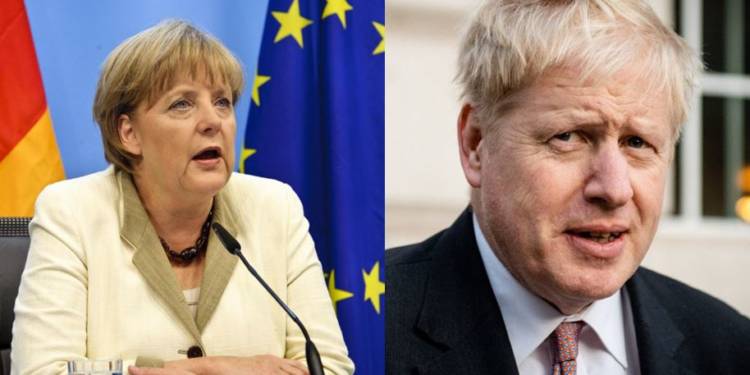 The United Kingdom has caused irreparable harm to the European Union- first, with the Brexit and then by beating the EU in terms of trade deals. A vindictive EU is now trying to ramshackle the UK by burdening it under a humongous 160 billion pound debt mountain.

The European Investment Bank and the European Financial Stability Mechanism has doled out hundreds of billions in loans, some of them financing “investment projects” in the fragile economies of the 27 EU members. London’s share of liability stands around 12 per cent.

Experts believe that the United Kingdom’s share of liability could come out to be around 160 billion pounds of unpaid loans, as opposed to the 39 billion Pounds “divorce” settlement between the UK and the EU.

Moreover, it is feared that the COVID-19 Pandemic and its aftershocks could push the UK’s liability even further as economies are slipping into recession and governments are getting cash-strapped.

With the EU drawing a loan bill- four times the size of the “divorce” agreement, Senior Tories have urged Prime Minister Boris Johnson to reopen the Withdrawal Agreement and remove London’s liability. Senior Tories want a “clean break” from the Brussels-based intergovernmental bloc by December 31 when the transition period ends.

Former Tory leader and leading Brexit supporter, Iain Duncan Smith told The Sun, “We would basically be boot-strapped to Europe for the foreseeable future.” He added, “If people thought we were only paying £39billion they can forget it. We’ve got a potential bill of £160billion and Covid could raise that massively.” He added,  “This would lock us into the EU’s debt mountain.”


EU’s latest bid to bury the UK under a debt pile comes on the heels of the UK beating the EU in a race for trade deals. Recently, India and the United Kingdom worked out an ‘Enhanced Trade Partnership’ as a precursor to the larger Free Trade Agreement (FTA) between the two countries.

Iain Duncan Smith, a UK MP, took to twitter to say, “whilst the UK wants to have a good trade relationship with the EU as a sovereign state, the EU has different ideas. They want our money and they want to stop us being a competitor. The Withdrawal Agreement (WA) we signed last year sadly helps them.”

Whilst the UK wants to have a good trade relationship with the EU as a sovereign state, the EU has different ideas. They want our money and they want to stop us being a competitor. The Withdrawal Agreement (WA) we signed last year sadly helps them. (1/3)

India’s progress on a free trade deal with the UK means that the India-EU free trade talks have been given a cold shoulder. India has developed cold feet towards Brussels after the latter irked New Delhi with innate resolutions on issues like Article 370 abrogation and the Citizenship Amendment Act (CAA).

Other countries like the US, Canada, Japan, Australia and New Zealand with whom the UK shares longstanding cultural, political and business ties, much like the Indo-UK relations, are also inclined to sign Free Trade Agreements (FTAs) with the UK at the expense of the EU.

German Chancellor Angela Merkel has antagonised the US with her pro-China stance and therefore an EU-US free trade deal also looks unlikely. Moreover, the sluggish economic growth and lethargic bureaucracy of the Brussels-based supranational organisation makes it an unattractive destination.

The United Kingdom was about to beat the EU ruthlessly in the free trade agreements race. Therefore, the EU weaponized the Withdrawal Agreement (WA) finalised between the EU and the UK last year.

Iain Duncan Smith said, “To avoid their own budget black hole, the EU gets £39billion as a “divorce payment” from us, reflecting our share of the current EU budget. But it gets worse. Buried in the fine print, unnoticed by many, is the fact we remain hooked into the EU’s loan book.

The UK has come to realise that the devil lies in the details insofar the Withdrawal Agreement is concerned. The EU is using the WA to tie Britain with loans for several decades to come and defeat the very purposes of Brexit- avoiding control from Brussels and becoming truly sovereign from the intergovernmental bloc.

What the EU is doing with the UK is setting an example by imposing exemplary costs. The European Union understands that it is a divided bloc. Countries like Italy are fed up with the EU, especially at a time when Germany has blocked the issuance of Corona bonds to rescue the COVID-ravaged economies. Moreover, Angela Merkel’s pro-China stance has marginalised countries like Sweden and Estonia that are handling nasty diplomatic spats with China.

With shocking debt trouble mounted on the UK, the message from Brussels is loud and clear- if you leave the EU, you will be given a painful ordeal and burdened under the weight of debt piles.

Countering China in its backyard: India’s soft diplomacy with North Korea will have a far-reaching impact

‘Go to UNSC’, Xi Jinping is rattled as Baloch and Sindhi freedom groups gang up on China and Pakistan