‘We can go sit in China’s lap anytime,’ Saudi Arabia has sent a subtle message to US 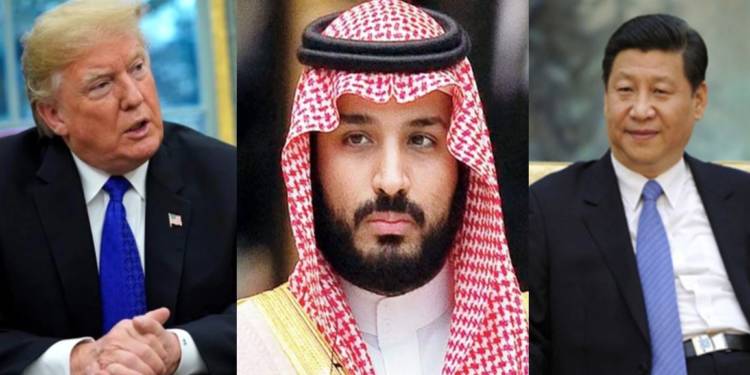 As per the latest Wall Street Journal report, Saudi Arabia has developed a facility to develop uranium yellowcake from Uranium ore. This is in line with Riyadh’s longstanding Nuclear energy ambitions and is said to have reached close to the completion of its first nuclear reactor last year. However, the reports of a nuclear facility are somewhat disconcerting as it has been reportedly established with Chinese help.

Wall Street Journal claims that the said facility is located in North-western Saudi Arabia far from populated areas and it has not yet been publicly disclosed. But this facility seems to have sparked concern among the United States’ and allied officials.

According to New York Times, American intelligence agencies have now taken cognizance and are now examining efforts by Riyadh to augment its capacity to produce Nuclear fuel which can eventually power the Islamic Kingdom towards its own Nuclear bomb. What the American intelligence officials fear is a secret Sino-Saudi deal to process raw uranium so that it can be later used as Nuclear weapons fuel.

According to NYT, government analysts and other experts believe that there could be a number of undeclared Nuclear sites within Saudi Arabia near the Kingdom’s Capital- Riyadh. Saudi Arabia wants a Nuclear weapon programme in order to keep pace with Shia-majority Iran, which has accelerated its progress for a Nuclear weapons programme after the failure of US-Iran Nuclear deal negotiations.

Riyadh has made no secret of its Nuclear bomb ambitions, with the Crown Prince Mohammed bin Salman himself pledging in 2018 that Saudi Arabia would not hold back from efforts to develop/ acquire its own Nuclear bomb in case Iran did not budge. But an arms race in the Middle East is not the main problem in the recent development.

American officials themselves believe that it would take years before Riyadh can make even a single Nuclear warhead, provided that it has already started to pursue an offensive Nuclear energy programme. The single biggest message that Saudi Arabia is sending to the US here is with the entry of China into the equation.

Saudi Arabia, the oil-rich desert kingdom, which produces 10 percent of global oil demand and holds the world’s largest proven reserves of oil and natural gas, has been dependent on the mighty United States for security for the last 75 years. And Saudi Arabia and the US remain allies. But cracks have emerged in their alliance- not because of any ideological tussles but due to shrinking American interest in the Middle East. Oil had powered the American interests in the Middle East and Saudi Arabia, but the discovery of shale oil and the rise of the shale oil industry in the United States has destabilized America’s ties with Saudi Arabia in the last few years. With the booming shale oil industry which grew exponentially due to high oil prices, the US became a net exporter of oil in last few years. Although the US still imports Saudi oil in large quantities, at the same time it also exports shale oil, eating into Saudi Arabia market share.

The US became energy-independent and therefore, the US President Trump also thought it fit to withdraw out of the Middle East. Trump believes that war-fatigue has set in and Washington is done playing the role of a net security provider in other parts of the globe.

The US stayed in Saudi Arabia as long as Iran remained a strategic threat in the American calculus. However, in the recent past, several blows were inflicted on the Shia-majority country and thus Trump called back the Patriot anti-missile systems and military troops from Saudi Arabia. This was a signal from Trump that Riyadh must look after its own security interests.

Oil was once the driver of strong ties between Saudi Arabia and the US. But today, oil is becoming the biggest source of the tussle between the two allies. Saudi Arabia’s only major source of income, that is, oil gets jeopardised due to the American Shale oil production. On the other hand, when Saudi Arabia engages in oil price competition with Russia, American interests get hampered because Shale oil is profitable only in a market situation of higher natural oil prices.

Trump insists that Saudi Arabia cuts oil supply or else the US will reduce military support, thus putting the Islamic kingdom in a conundrum. Riyadh is trying to respond by making certain overtures towards Beijing. China is, in turn, happy to increase engagement with a powerful Middle East country. Unlike the US, China is not energy independent and therefore it aspires a lot of presence in West Asian powers. Saudi is therefore signalling that if the US develops cold feet about Riyadh, then Saudi Arabia will have no qualms about shifting into Beijing’s lap.