After insulting Christians with Hagia Sophia move, Erdogan targets Jews as he wants to “liberate” Al-Aqsa mosque in Jerusalem 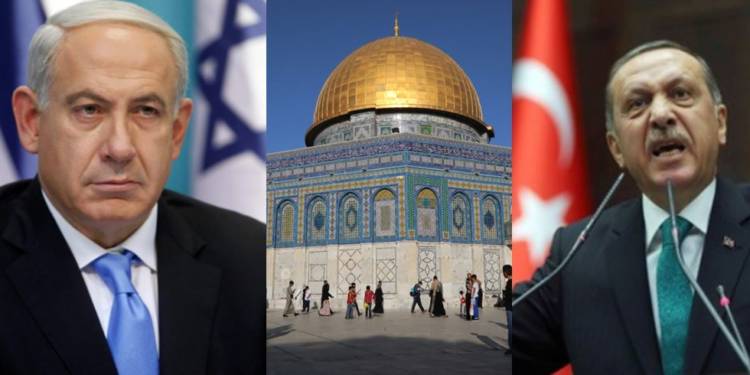 The Mosque is built atop the Temple Mount- the holiest Judaism site in the world built by King Solomon. The First Temple was destroyed in 586 BC by the Babylonians and the reconstructed temple known as the Second Temple was again destroyed by the Romans in 70 AD. Yet the site of the Temple remained as the venue of Jewish prayers.

Israel had extended its sovereign control over the Eastern part of Jerusalem after the Six-Day war in 1967 and as a necessary extension started controlling access to the Temple Mount.

As for Turkey’s Islamist President and ‘wannabe Khalifa,’ Al-Aqsa is another instrument in his political agenda of celebrating the brutality and barbarity of the Ottoman Empire. Jerusalem was under the control of the Ottomans- the precursor of the Republic of Turkey till 1917 and therefore Al-Aqsa has come high on Erdoğan’s agenda after Hagia Sophia.

It seems that Hagia Sophia was just the trigger as Erdoğan’s bigger aim is Al-Aqsa. According to a pro-government Turkish daily, Yeni Şafak, the Turkish leader said that “the resurrection of Hagia Sophia was the harbinger of the liberation of the Al-Aqsa Mosque, and footsteps of Muslims’ will to leave hard days behind.”

The Conference of Presidents of Major American Jewish Organizations, an umbrella group representing 53 Jewish organizations issued a statement last month reading, “We are appalled by the incendiary and offensive statement made by Turkish President Recep Tayyip Erdogan… implying that he seeks to take control of the holy sites in Jerusalem’s Old City, which is home to the Al-Aqsa Mosque.”

Ankara is, therefore, directly encouraging violence against Israel and Jews with his comments about “liberating” Al-Aqsa. Make no mistake, Al-Aqsa is presently governed by an Islamic trust and thousands of Muslims regularly pray there, whereas Jews pray at the Western wall, which sits below the Al-Aqsa Mosque and is considered a remnant of the Second Temple destroyed in 70 AD.

Moreover, Jews consider the top of the Mount as a revered area, because as per Judaism it is at this place that Abraham offered to sacrifice Issac. However, Jews are forbidden from praying there. This in a way forms the matter of dispute regarding the 36-acre Temple compound. Jew devotees led by activists like Bentzi Gopstein have been agitating for the construction of a Third Temple at the site.

Jewish devotees regularly try to visit the top of the Mount, upon which the Islamic Waqf goes up in arms. The Islamic Waqfs in Jerusalem are under the control of Jordan’s Ministry of Awqaf, Islamic Affairs and Holy Places as per a 1994 Peace treaty between Israel and Jordan. The Islamic Waqf, however, tries to claim sovereignty over the holy site.

Recently, for example, an Israeli court ordered the closure of the Al-Aqsa Mosque gate. But the Jordan-run Islamic Endowments Authority said, “Al-Aqsa is superior to be subject to any court or political decision by the Israeli authorities.” It added, “Muslims do not endorse or recognize these illegal decisions by the [Israeli] occupation, and therefore do not abide by them.”

Israelis are anyway under threat near the Temple Mount because of its disputed character. In 2017, for example, two police officers were killed near the holy structure during a terror attack.

It is to note that Al-Aqsa is no Hagia Sophia. The main part of the Temple Mount compound is controlled by a Jordan-controlled Waqf. For the Turkish President to demand its “liberation” means that he is looking to turn the 36-acre Temple complex into an exclusively Muslim site by erasing every memory and archaeological evidence of Temple Mount’s historical Jewish connections.

This is why the Conference of Jewish Presidents said, “This outrageous rhetoric regarding the al-Aqsa Mosque can and has incited violence against Israel and its citizens — and will add to tensions in the region. We condemn it strongly and urge President Erdogan to recant his inflammatory words and actions.”

Turkey is increasingly becoming a threat to Israel. And anti-Semitism seems to rule the roost when it comes to Ankara. Turkey and Iran are the biggest sponsors of Hamas- the militant faction of Palestine which is fighting an existential battle with Israel. With al-Aqsa, the Turkish President wants to violently manifest his ideology of political Islam, and ultimately, he will try to lay claim on other disputed sites like Lord Ram’s birthplace in Ayodhya.

Run Erdogan. Putin cometh!! Russia has turned the tide in the Libyan war. And a shameful defeat awaits Erdogan