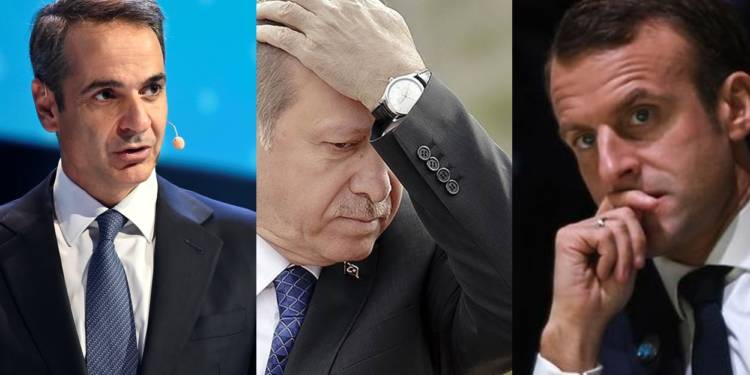 Tables have turned against Turkey’s President Recep Tayyip Erdoğan in the Eastern Mediterranean and how! Turkey was bullying Cyprus and Greece not very long ago. The wannabe Khalifa, Erdoğan was moving research ships in an out of the Greek maritime space at will. But with French reinforcements in the Eastern Mediterranean, Paris is staring down at Turkey while Greece is now roaring at Turkey.

Erdoğan has an affinity for violence, incursions and refugee threats but the wannabe Khalifa has now suffered a major meltdown. The Turkish President has said that Ankara and Athens will be able to arrive at an amicable solution only through peace and negotiation.

The French jolt for Turkey came after Ankara issued another NAVTEX alert for seismic research of the vessels– Oruç Reis, Ataman and Cengiz Han– till August 23. The research activity was to take place within Greece’s Continental Shelf. Erdoğan had issued a warning to Greece, saying, “We said that if you (Greece) attack our Oruc Reis you will pay a high price, and they got their first answer today.”

France however responded brutally by sending in two Rafale fighter aircrafts and a naval frigate- ‘Lafayette’ to counter the growing Turkish threat to Cyprus and Greece. The French President Macron announced, “I have decided to temporarily strengthen the French military presence in the Eastern Mediterranean in the coming days, in cooperation with European partners including Greece.”

An emboldened Greek Prime Minister Kyriakos Mitsotakis has also announced that “no provocation will remain unanswered”. He added, “We hope logic will finally prevail in our neighbouring country so that honest dialogue can begin.”

A visibly shaken Erdoğan has since been taking jibes at Macron’s support to Greece. He said that Athens was being provoked to take “wrong steps” by a “country that doesn’t even have a coast in the eastern Mediterranean”.

Looking at the stubbornness of France, the wannabe Khalifa has gone complaining to the German Chancellor Angela Merkel and the European Council President Charles Michel. During his phone call with Merkel, the Turkish President “reiterated his commitment to defend Turkey’s rights against attempts to disregard them.”

The Turkish President is desperately trying to play victim. On Thursday, he said, “If we act with common sense and reason, we can find a win-win solution that meets everyone’s interests.” He also tried to assure, “We are not chasing any unnecessary adventures or seeking tensions.”

The Turkish President finds himself surrounded in the Eastern Mediterranean, and therefore he is desperately trying to curry favour by crying foul and playing victim. Not just foes, but even friends are abandoning an Islamist-expansionist Erdoğan. The Turkish President was betting on Germany, with whom Ankara has improved ties even after a temporary strain in 2016 due to a failed coup attempt against the Turkish President.

But even the German Chancellor Angela Merkel has developed cold feet over the Turkish belligerence against Greece. Last month, some Greek reports quoted Merkel as telling the Turkish President- “the Greeks are not joking,” and asked Erdoğan “to expect a hot incident if you take Oruç Reis out for investigations.”

Ankara finds itself surrounded from all sides. No one wants to back him because of his rogue actions. Therefore, Erdoğan is losing his calm with a massive meltdown and starting a new narrative to paint Greece and France as the real aggressors.