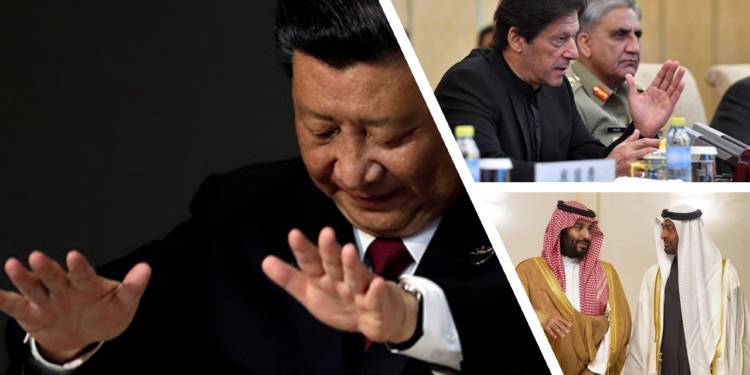 Pakistan seems to have picked the wrong side in the geopolitical crossroads. Pakistan has had a fallout with its Islamic godfathers- Saudi Arabia and the UAE, as these two undisputed leaders of the Muslim world have refused to back Islamabad over its failing Kashmir agenda. Pakistan has therefore backstabbed Saudi Arabia and put its weight behind Turkey’s mission to claim leadership of the Muslim world. But now, having lost the Arab godfathers, Imran Khan is betting heavily on a Communist China.

But if Pakistan thinks it can replace its patrons Saudi Arabia and UAE with China, it is deeply mistaken. Unlike UAE/Saudi Arabia, China doesn’t care for Pakistan’s ‘religion’. And Imran Khan will learn the hard way that China is no godfather when Beijing swallows Pakistan whole. If Pakistanis bring up religion or rebel when China overruns the Islamic Republic, Beijing would crackdown in a rather brutal manner.

Till date, Islamabad’s foreign policy hinged on an extraordinary alliance with Saudi Arabia and the UAE. The two biggest Arab powers who kept Pakistan’s troubled economy afloat, issuing selfless bailouts to rescue Pakistan whenever its economy was about to crash. Whenever Pakistan refused to secure bailouts from the International Monetary Fund (IMF) or its ‘iron brother’- China, it relied upon the Arab godfathers.

Islamabad also kept benefitting from Arab oil, while its economy went into a tailspin. And the Arab help was unconditional- no strings attached. The Arabs were helping Pakistan only because of Pakistan’s religion and had nothing to gain out of the terrorist country. However, Imran Khan seems to be more concerned about needling India over Kashmir rather than securing Arab help, and therefore he embarked on a suicide mission to support Turkey- an adversary of the Arabs.

The fact that Pakistan is pivoting towards China, and away from its Islamic godfathers became clear when Pakistan’s overzealous Foreign Minister Shah Mehmood Qureshi suffered an epic meltdown and issued an ultimatum to Saudi Arabia. He said that Pakistan would have to look for other options if the OIC doesn’t come forward in support of its stance on Kashmir, inadvertently threatening Saudi Arabia who leads the chair in OIC.

Soon after Qureshi’s threats, Pakistan was staring at a new crisis, as Riyadh ended a loan and associated oil facility to Pakistan. Islamabad had to repay a Saudi loan of 1 billion US dollars due to Qureshi’s desperation. So, now what? Turkey, Pakistan’s new Islamic godfather is itself in the midst of an economic crisis and cannot fend for itself, leave alone rescue anyone. So, Imran Khan has only China to turn to.

Pakistan’s Foreign Minister Mehmood Qureshi was rushed to Beijing for an overnight visit on Thursday. As Imran Khan puts it, “China is our only friend which has remained politically steadfast with Pakistan during good and bad times.” Therefore, Pakistan has no one to rely upon now- the Arabs have snubbed it, the US has hammered it with aid cuts and now the only option left is China.

And this is where Pakistan’s tragedy really starts. China is not a friend, but a plain and simple usurper which wouldn’t spare Islamabad either. Chinese investments will come with a lot of strings attached. Chinese influence in Pakistan is already way too high for Islamabad’s sovereign interests, but now we are talking about actual physical colonisation of the Islamic Republic as it falls into the Chinese debt trap.

Pakistan is already reeling under Chinese debt with the China-Pakistan Economic Corridor (CPEC)- a component of Xi Jinping’s Belt and Road Initiative (BRI) inflating with every passing day. The project originally valued at 46 billion US dollars, but cost overruns are now estimated to have inflated it to a whopping 87 billion US dollars. Ultimately, Islamabad is going to pay for over 90% of it as the debt quotient of the CPEC is humongous at 80 billion dollars.

By the time CPEC will be completed, it would have become an even bigger debt-trap and with every default on Chinese loans, Beijing will start occupying more and more of Pakistan.

Snubbed by all its past partners, Pakistan is now up for grabs and China will colonise bit-by-bit. China will usurp Pakistani land and take over the Islamic Republic’s government-owned companies. Islamabad’s leftover sovereignty will be the ultimate causality.

And the Chinese colonisation is going to be much more painful than Pakistanis can imagine. We know for a fact that China detests Islam or for that matter even the observance of the Muslim faith. We have seen how China is uprooting Islam out of Xinjiang by lodging Uyghur Muslims in concentration camps. China will also strike all rebel voices in Pakistan with an iron hand and it is the Pakistani government itself which would find itself compelled to un-Islamise Pakistan.

Hilarious but True. Pakistan is trying to do a coup in Saudi, and it thinks it can really pull it off