‘Biden is smoother to deal with,’ Joe Biden gets unconditional backing from CCP. Now Trump’s victory is sealed 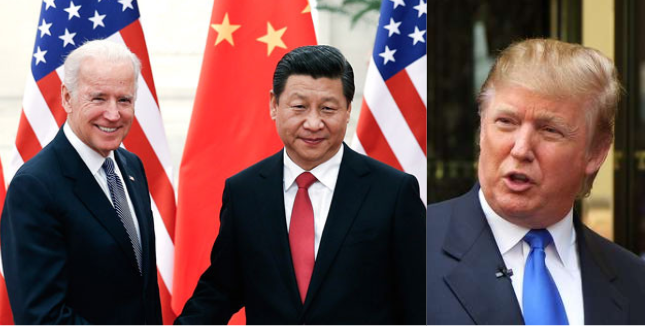 Days after launching a vilification campaign against the incumbent US President Donald Trump and praising Joe Biden, China has now almost officially given unconditional backing to the Democrat Presidential nominee.  The Chinese Communist Party mouthpiece, Global Times has published a 1200-words story arguing why Biden is better than Trump. China’s support for Biden comes shortly after the Democrats officially nominated him as their Presidential candidate.

The Global Times which serves not only as a CCP mouthpiece but also a Chinese Foreign Ministry overhang/ proxy says, “Biden (is) ‘smoother’ to deal with”. Global Times also stated, “If Biden wins, the US will remain tough on China. So Beijing should remain vigilant. But tactically, the US approach would be more predictable, and Biden is much smoother to deal with than Trump — a viewpoint that is shared by many countries.”

Global Times quoted Chinese analysts– a euphemism for Chinese diplomats– as saying, “Although Biden would very likely to use totally different tactics to continue the US-launched great power competition with China, such as restoring negotiations on the Trans-Pacific Partnership (TPP) Agreement. As long as the US returns to multilateralism, the two greatest economies in the world could at least have more reasons to dialogue and cooperate.”

Interestingly, the Global Times has also weaponised the Democrats’ opposition to Trump’s anti-China measures. The CCP mouthpiece said that according to Democrats “the tariff war that the Trump administration started with China more than two years ago has weakened the US economy.”

China is also looking to bank on Biden’s prior stint as a Vice-President in the Obama administration when the former US President had tried to ensure that Beijing grew as a “responsible stakeholder” in the present world order.

Therefore, Global Times quoted Lü Xiang, a Research Fellow at the Chinese Academy of Social Sciences in Beijing said, “Biden could revive Barack Obama’s legacy. Negotiations on the TPP and the Transatlantic Trade and Investment Partnership (TTIP) could be restarted very soon if Biden takes office.”

The CCP believes that Biden would help China mainstream itself as opposed to the present decoupling that it is facing. Li Haidong, a professor at the Institute of International Relations at the China Foreign Affairs University said, “Biden is definitely smoother to deal with, which is the consensus around the world. For China, because Biden was vice president during Obama’s term, and had a lot of prior experience dealing with Chinese leaders, we would expect to facilitate more effective communication with Biden if he wins.”

But can we blame China for showing love to Biden? The fact remains that it is Biden’s Sinophilia which is making China root for the Democrats. Biden had himself promised to end Trump’s tariff war which is ransacking Beijing’s export-based economy. It is a different matter that one of Biden’s aides clarified that no final decision had been taken, but the CCP already knew that Biden is the man they must back with all their might.

Biden wants to walk a fine line on Beijing and recognise the need for co-existence. This is why the CCP feels that Biden is ‘smoother’ to deal with.

China is also harping on Biden’s stint as the former US Vice-President because Biden himself brings that up time and again. In a recent interview, he had said, “I spent a fair amount of time when I was (the) Vice President with President Xi because the President wanted me to get to know him.”

Biden has certainly walked down the wrong path with his pro-China utterances. The Democrats do not seem to understand that an overwhelming majority of Americans hold an unfavourable view of China for obvious reasons. Trump has also made a major election issue out of China’s rogue behaviour by detaining Chinese spies, closing the Houston Consulate, imposing tariffs on Chinese products and going after Chinese tech companies like Huawei, TikTok (ByteDance) and WeChat (Tencent).

Trump is already being credited for taking on China, while the Democrats still remain obsessed with Russia at a time when Russia isn’t as big an issue in the US as it used to be. It was always known that China was betting on Biden, but it is for the first time that a Chinese State-run media outlet has said it in so many words.

This is Trump’s moment to tell the American voters that he had already exposed the not-so-bad relationship between the Democrats and China. Even after Joe Biden’s Democratic Convention speech, Trump had said, “China was never mentioned in any way, shape or form.”

"He didn't talk about law enforcement," says @POTUS of the #DemocraticConvention nomination acceptance speech by @JoeBiden. "China was never mentioned in any way, shape or form." pic.twitter.com/N41CMh8Y79

Trump’s popularity is going to reach an all-time high with the latest Global Times story supporting Biden unequivocally. Come November 3, Trump’s winning margin is likely to go up by leaps and bounds.