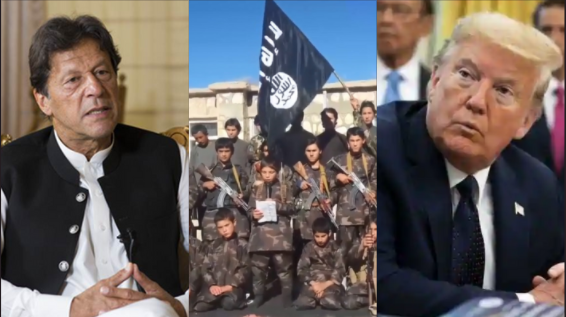 Pakistan’s FATF fears are coming true. While India’s National Investigation Agency (NIA) is implicating Pakistan in the Pulwama terror blast that had resulted in more than 40 Indian security forces casualties in Kashmir, the White House is also cornering Islamabad over its terror role in Afghanistan. The United States has reportedly started probing Pakistan’s Islamic State (IS) links. Pakistan has played dirty games in Afghanistan for more than a decade, and now it is moving closer to the judgment day.

The role of Pakistani nationals in the Islamic State of Syria has come into question as the US-backed Kurdish Democratic Forces have released a list of 29 Pakistanis who are in Kurdish custody. These Pakistanis were fighting for the radical Sunni movement- ISIS. Also, under the scanner is the Islamic State Khorasan (ISKP) – a Pakistan-sponsored terror organisation active in Afghanistan.

A counter-terror official has been quoted by HT as saying, “The American security forces are currently interrogating these Pakistani nationals including who sent them to fight for IS in Syria and their past affiliations with terrorist groups like the Al Qaida or any other pan-Islamic group based in Pakistan. As the Pakistani deep state is involved with the so-called Islamic State of Khorasan Province in Afghanistan, the interrogation will also reveal its role if any.” The US is therefore not only exposing Pakistan’s IS links but also delegitimising Islamabad’s presence in Afghanistan.

The IS presence in Afghanistan directly concerns the ISKP. Pakistan’s deep involvement in this group is well-known since the slain Tehrik-i-Taliban Pakistan terrorist Hafeez Saeed Khan was appointed as its leader after the ISKP formation in the year 2015. As such, the ISKP bears close links with both Pakistan and Pakistan-sponsored Taliban. Moreover, the Muridke, Pakistan-based Lashkar-e-Taiba also uses the ISKP as a proxy for terror attacks in Afghanistan and targeting civilian institutions in the war-torn country.

Furthermore, ISKP chief Aslam Farooqui, who was arrested after the Kabul Gurudwara blast earlier this year, is a Pakistani national with clear links to Pakistan’s external intelligence agency, the Inter-services Intelligence (ISI).

What irks the US is that there has been a serious spike in the ISKP activities post the US-Taliban peace deal which was finalised in Doha, Qatar earlier this year. With the prospect of the US troop’s withdrawal around the corner, Islamabad wanted to strengthen its grip in Afghanistan and therefore the ISKP went into overdrive.

After the announcement of the peace deal, the ISKP has carried out several attacks, including killing minorities like Afghan Sikhs, Hazaras and Shias. Recently, the Pakistan-affiliated organisation stormed a maternity hospital killing mothers, newborn babies, nurses and a police officer. ISKP also attacked a prison which led to several casualties and prisoners escaping.

Every time there are talks of an American withdrawal, Pakistan starts using the Islamic State to destabilise the civilian government led by Ashraf Ghani in Kabul. Even in August last year when the talks of a US-Taliban peace deal were doing the rounds, the ISKP had carried out a suicide blast killing 63 attendants at a wedding in Kabul.

The ISKP presence in Afghanistan is a living embodiment of Islamabad’s ISI-terror nexus and the United States is unapologetically weaponizing it. It is not lost on the Trump administration that the US was not able to defeat the Taliban militarily only because Pakistan used to aid and abet the Taliban and its affiliates, even when Islamabad was getting generous American aid.

Now, Trump is punishing Pakistan by using the latter’s terror links in Afghanistan to push it towards FATF black-listing. Pakistan’s internal atmosphere further helps the US, as Imran Khan’s efforts to mislead the world with a fake crackdown on terror financing often goes down the drain. Recently, for example, the Pakistani Senate turned down two legislations which Islamabad wanted to enact to avoid a FATF blacklisting.

Islamabad has hurt American interests in Kabul for far too long, and it is the turn of the United States to hit back. Not only is Pakistan moving closer to FATF blacklisting, but it is also being uprooted from Afghanistan. By exposing Pakistan’s terror nexus in Kabul, US President Trump is eliminating Pakistan from any future role in Afghanistan and also orchestrating a fall out between Islamabad and Taliban that would ultimately marginalise the terrorist country.