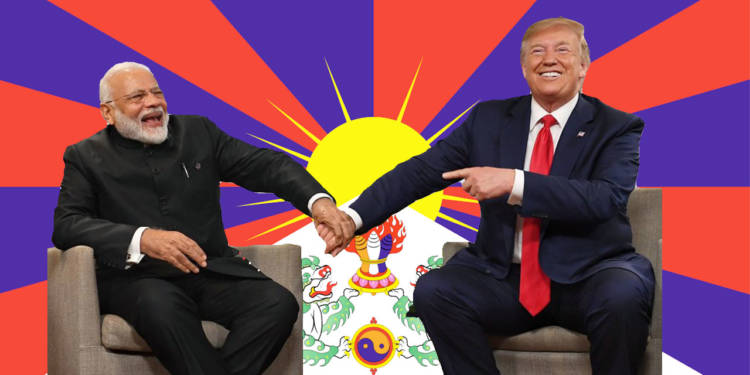 China’s remarks about Tibet are coming without any major provocation as such. Barring some soft signalling by China’s arch-foes, Beijing is yet to face a major pushback over Tibet. But within Chinese strategic circles, there seems to be unease about the growing Indo-US proximity in the context of the Eastern Ladakh standoff. As such, the present geopolitical circumstances are reinventing the horrors of the 1950s and the 1960s when a secret Indo-US alliance was stitched together to help the Tibetan cause.

The US-Communist global competition has gone through several phases, including the first phase of the US-Soviet Cold War, the post-Cold War phase and the emerging US-China great power competition. But, China remains obsessed with the US threat that it was facing in the 1950s and 1960s.

Chinese strategists never really came out of the post-World War II phase, when the White House was still undecided on which Communist giant to take on- the USSR or the People’s Republic of China or both. Initially, the US policy was about fighting both of them.

Therefore, alongside the Cold War with the USSR, the US was also fighting Chinese Communism. And this is where Tibet came into the picture. The US couldn’t hold back the Chinese invasion of Tibet, because, the American troops were then sucked into the Korean war. However, soon after China started ruling Tibet with an iron fist, the US aligned with India to accelerate the cause of Tibetan independence.

In fact, the Central Intelligence Agency (CIA) of the United States is said to have played a role in the Dalai Lama’s escape from Tibet to India in 1959, which keeps the Tibetan cause alive till date. In later years, the Indo-American alliance over Tibet only grew stronger.

As per South Asia expert Stephen P. Cohen of the Brookings Institution, the CIA assisted India in the creation of India’s external intelligence agency- the Research & Analysis Wing (R&AW). Moreover, after the 1962 Sino-India war, the CIA also helped India raise the Special Frontier Force (SFF), commonly known as the Establishment 22 or the Vikas Regiment– a covert special force that recruited from Tibetan refugees in India intending to strike behind the Chinese enemy lines. Recently, it was reported that the SFF was pressed into action during the Eastern Ladakh standoff.

The Indo-American alliance ran into the 1970s, and according to a 1998 NYT report, the exiled Dalai Lama administration received an acknowledgement that it had received the aid of $1.7 million a year from the CIA. The aid was quite generous and dwarfs the recent United States Agency for International Development (USAID) grant of 1 million US Dollars to the Central Tibetan Administration based out of India. Moreover, there is a lot of difference between a USAID grant and CIA help. The CIA can help create a worldwide opinion about Tibetan independence cause.

However, the US support for the Tibetan cause declined after the then US President’s diplomatic reach out to the CCP founder Mao Zedong in 1972. There was an ugly Sino-Soviet split in the late 1960s, and the US wanted to surround the Soviet Union more desperately than surrounding China. Therefore, the US and China reached a tacit understanding, which meant an abrupt ending to the US support for the Tibetan cause. And then, of course, New Delhi’s ties with Moscow created space for a rapprochement between Beijing and Washington.

The Dalai Lama himself has been quoted as saying, “Once the American policy toward China changed, they stopped their help.” He added, “Otherwise our struggle could have gone on. Many Tibetans had great expectations of CIA [air] drops, but then the Chinese army came and destroyed them. The Americans had a different agenda from the Tibetans.”

Since the 1970s, there has been a huge gap of sadness and distance, when it comes to the Tibetan cause. But now a revival under US President Trump and PM Modi seems very plausible. China has grown much bigger a threat than present-day Russia, and whoever comes in the White House will have to do something about the China challenge.

In the 1950s, the US had formulated two options to take on China– the Tibet programme and the Island Chain Strategy in the Pacific. With time, both of them have been given up. But now, both the options have come back to life.

However, Washington is likely to prefer the Tibetan cause amongst the two, because the ASEAN countries forming the First Island Chain against China may not be very keen to decouple from Beijing given their trade and economic interests in the humongous Chinese market. On the other hand, India is showing that it is ready and willing to indulge in economic warfare against the Dragon.

This is not to say that the US will minimise its role in the South China Sea. Of course, it will continue to confine China in its waters, but raking up the Tibetan cause is the only option for White House to hem in China and damage it in a significant manner.

Therefore, as the six decades-old secret Indo-American alliance shows signs of coming back to life, Chinese strategic circles are going through an epic meltdown.

What turned Macron from a left-wing politician to a supremely right-wing leader?