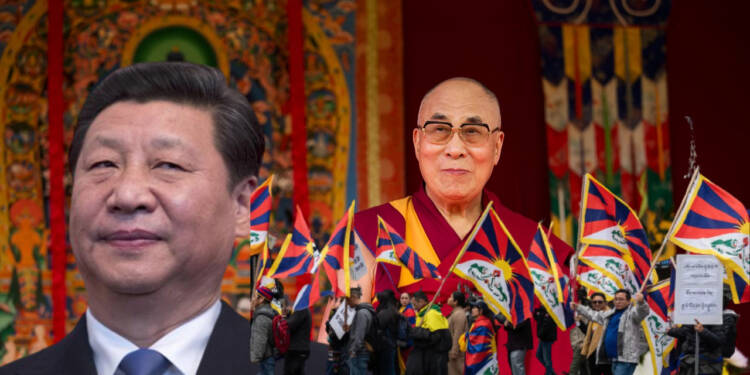 Tibet is one of the highest regions in the world. It is traditionally the homeland of the Tibetan people as well as some other ethnic groups. But, because it used to share borders with China, the region was invaded on purpose by CCP.

The region has been ruled by China since 1951. Many believe it was a systematic strategy of China to pursue ethnic cleansing of the Buddhists. This has often been described by the Tibetan people and third-party commentators as “a cultural genocide”.

Though Tibetian did revolt against China in just 8 years, nothing happened. The unsuccessful Tibetan Uprising of 1959, in which Tibetans rebelled in an attempt to overthrow the Chinese government, led to the fleeing of the 14th Dalai Lama to India.

He has lived in exile ever since. A few hundred Tibetans initially followed the 14th Dalai Lama into exile, and since then hundreds of thousands have followed. Well, this is a very sad thing to say but it’s possible, that Buddhism in Tibet may become a tale of yesterday if Chinese President Xi Jinping secures an unprecedented third term of the leadership of the Chinese Communist Party.

But where there’s a will, there’s a way. Tibetans still have a fair chance to throw away CCP from the Tibetian region. For the first time in the last 50 years, a major uprising has been seen in Tibetans.

The Anguished Tibetans have undermined tight Chinese security and online surveillance to honor the 87th birthday of exiled spiritual leader the Dalai Lama with a free spirit.

On July 6th, many Tibetans made Sangso incense smoke offerings on the top of hills in their respective areas. Furthermore, Tibetans also celebrated the day by holding picnics at various spots.

Now that’s a big blow to China which had given austere notice to Buddhists to avoid celebrations of Dalai Lama’s birthday or else face consequences.

In the Himalayan region, Chinese authorities encouraged everyone to attend sessions where they warned Tibetans not to share any types of images and warned them that their telephones would be examined for prohibited information on the occasion of the Dalai Lama’s birthday.

History had it written how the Chinese authorities in the Himalayan region have clamped down over Buddhists and followers of Dalai Lama for celebrating his birthday. If one remembers correctly, last year CCP officially arrested 20-30 Tibetians for celebrating Dalai Lama’s birthday.

Surprisingly, this year there had been no arrests nor has been any report of a clampdown on Tibetians.

Furthermore, as China never allowed Tibetans to celebrate Dalai Lama’s birthday, the world also majorly marched around the flag and stop celebrating his birthday. But this year, my temperament has changed.

In Tibet bordering Nepal, the government permitted a two-hour celebration of the Dalai Lama’s 87th birthday at the Jawalakhel Tibetan Settlement, this facility is home to more than 1,000 Tibetans.

Moreover, diplomats from the embassies of France, the EU, Japan, and the United States were also among the foreign guests at the settlement center to celebrate.

There could be a possibility that Chinese authorities had succumbed to the mounting discernment amongst Tibetians and hence, no discontent against the celebrations was shown by China at all.

The Tibetans have been warned many times that it is a dire possibility that Xi Jinping would spill poison against Tibetans if he gets a third term at the Beijing office.

See, ever since, Xi Jinping was elected president of China, there have been several changes in the CCP’s perspective and policies on Buddhism in Tibet, which the government has recently challenged through a number of avenues.

Furthermore, Xi has openly shown his evil intentions toward Tibetans by demolishing their temples and prayer house. In December 2021, a very prominent 99-foot Buddha statue was completely demolished along with the 45-huge prayer wheels surrounding it in Drakgo, Kham, situated in the Chinese demarcated Sichuan province of Tibet.

Whereas, Chinese authorities exert significant tight control over Tibet and the areas of western China where Tibetans live, limiting their ability to even express their cultural and religious identity. Doing so would subject them to extrajudicial executions, torture, and detention.

This explains it enough, that Xi and Tibetans stay at complete odds with each other. But, this sudden uprising by Tibetans to openly celebrate Dalai Lama’s birthday with pride and honor indicates that they are going full rogue against the Chinese Regime.

It could be just a matter of time before we see another Tibetan uprising happening in front of our eyes. But, this time, we hope Tibetans would definitely emerge victorious.