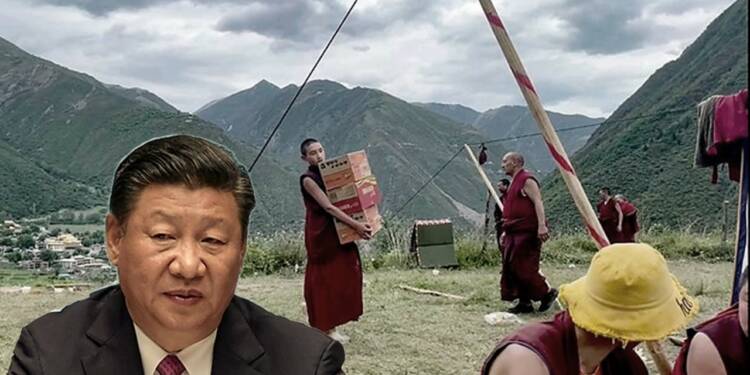 On June 10, the Sichuan region of China was jolted by an earthquake of magnitude 6.0 on the Richter scale. More than 25,000 people were relocated from Barkham.

According to the China’s official report, there were nil or few casualties. However, we have our doubts about that figure. The reason for this skepticism is the information coming from Barkham, that is strictly controlled by the Chinese authorities. Residents are prohibited from sharing any reports, photographs, or other information about the earthquake, which destroyed houses, stupas, and monks’ residences, among other things.

The most heinous act on the part of the Chinese government occurred when no one from the authorities reached out to these residents for days. It took the government rescuers three days to arrive in the impacted area. Guess who stepped in to help these locals? Well, it was the Tibetans who offered support to the survivors and helped them to return home. These are the same Tibetans who are the targets of China’s propaganda campaign. China claims that the “Free Tibet movement” is made up of anti-China Westerners who have never visited Tibet and thus have no right to criticize China’s policies.

Nevertheless, China has colonized and administered Tibet since 1951 as part of a ‘planned and systematic policy intended at the eradication of their national and cultural identities.’ Tibetans and third-party commentators have frequently referred to this as “cultural genocide.” 35,000 Chinese troops invaded Tibet, and raped, tortured and slaughtered an estimated 1.2 million Tibetans, accounting for one-fifth of the country’s population. Thousands of Tibetans have been imprisoned and over 6000 Buddhist monasteries have been demolished since then.

Since 2009, hundreds of Tibetans have set themselves on fire to protest China’s ruthless policies. Due to the lack of official records and the restriction of the free press in communist China, the figures are hazy.

When Dawa Rinpoche, a respected Tibetan high-ranking Lama, died at the age of 86 in Tibet’s capital Lhasa, the CCP attempted to sweep the news of his death beneath the carpet in order to prevent major rallies in Tibet.

Read more: What happened in Tibet didn’t stay in Tibet

And now, when the same Tibetans stepped forward to assist the people of Sichuan as part of the earthquake relief effort, you’d be surprised to know what Chinese officials did. Instead of thanking the Tibetans, the authorities urged the Tibetans to leave the area immediately. Tibetans offering assistance were told to leave after Chinese rescue teams arrived on June 13, according to a Tibetan resident of the area (RFA).

“After the official Chinese rescue teams came in, the Tibetans who had come from nearby regions to provide help were not allowed to stay and were told by Chinese authorities to leave the area” RFA’s source said. “However, the timely assistance they provided to survivors was a huge help,” the source said.

Isn’t that a thoroughly deplorable move on the part of the CCP authorities? Without a doubt, all of this was done in order to prevent the people of the region from acquiring a soft spot for the Tibetans, and the support for the ‘Free Tibetan Movement’ to grow.