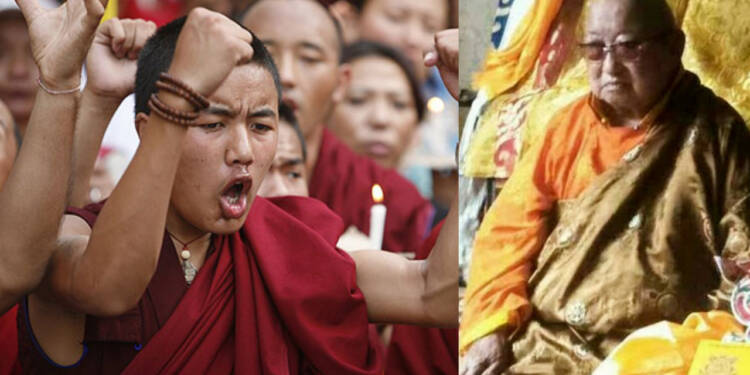 Something dramatic has happened in China-occupied Tibet. On January 30, Dawa Rinpoche, the beloved Tibetan high ranking Lama, died in Tibet’s capital, Lhasa, at the age of 86 years.

During the two weeks of his death, the monk’s dharma body went through a state of deep meditation called “Thukdham” in Tibetan Buddhism. In this state, the body stays seated in meditation and free from odour, deformation, or decay. Anyhow, the CCP tried to bury the news of his death under the carpet to prevent any major demonstrations in Tibet. Yet, the news has finally turned into a source of uprising in the China-occupied region.

Who was Dawa Rinpoche?

Born in 1937 in Nagchu, Tibet, Dawa Rinpoche was a Tibetan Buddhist monk who was recognised as a reincarnated Lama, known as the Fifth Choktrul Dawa Rinpoche.

He carried significant political influence in Tibet and after his country’s illegal occupation by China, Dawa Rinpoche was persecuted by the CCP for expressing disapproval of the Chinese Government.

CCP kept throwing Dawa Rinpoche into jail every now and then. He was handed a five-year sentence during the so-called Democratic Reforms, followed by a seven-year term of imprisonment during the Cultural Revolution.

Even at an old age of 73 in the year 2010, the Chinese government authorities arrested the Buddhist monk for discussing  the search of Rongpo Chogyal Rinpoche, the head of Shag Rongpo Monastery, with the 14th Dalai Lama. Dawa Rinpoche was kept in jail for seven years, before being released in 2017. Even after his release in 2017, the monk was subjected to heavy scrutiny and monitoring by the CCP.

Dawa Rinpoche, being a symbol of Tibetan resistance against the CCP, the Chinese government was evidently keen on downplaying the news of his death. It feared that things could escalate due to the outpouring of anti-CCP sentiment in Tibet.

Therefore, Dawa Rinpoche’s death was followed by a desperate cover-up. First, the news of his death was blocked by the Chinese. Then, Tibetans were warned against attending his funeral and finally, Dawa Rinpoche was censored from the media and the internet.

On February 13, the CCP banned outside devotees from coming to see Dawa Rinpoche’s last remains. On February 15, it ordered that all devotees “were not allowed to pay homage, offer khatas (white scarves), create commotion and take photos or videos”. In order to ensure compliance, the CCP made it clear that the monk’s body won’t be allowed to be transferred from Lhasa back to Shag Rongpo Monastery in Nagchu if the orders were violated.

When Rinpoche’s body reached his hometown monastery, the Chinese government authorities restored to use of force against those who requested to see his last remains. A week later, authorities allowed monks from the monastery to attend the funeral but photography was strictly prohibited.

The reports of clashes between Tibetan locals and Chinese government officials show that the Chinese cover-up attempt backfired spectacularly.

China was trying to prevent any major outpouring of adverse sentiment against it after the death of Dawa Rinpoche.

Read more: Only Mongolia can save the Tibetan Buddhism from being ravaged by China

However, Tibetans are clearly miffed because of three reasons-

Tibetans, therefore, have a reason to stage an uprising of sorts against the CCP. It, therefore, seems that what happened in Tibet won’t stay in Tibet.