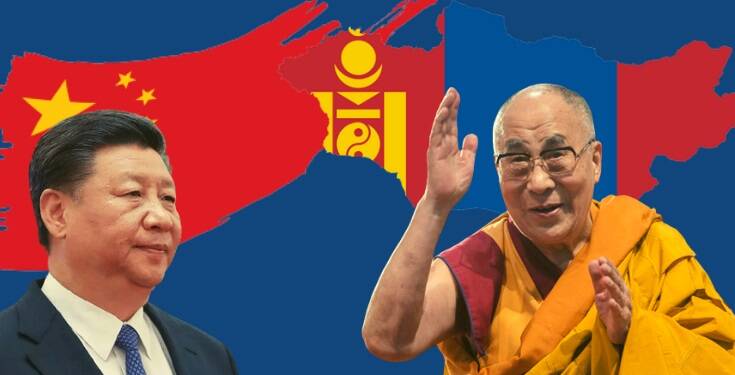 Mongolia, a lesser-known nation sandwiched between Russia and China, holds a key position in shaping the future of Tibetan Buddhism.

Why is Mongolia important for preserving Buddhism?

In 2016, when Dalai Lama was visiting Mongolia, he announced that the Jebtsundamba Khutuktu, considered the third most important lama after the Dalai Lama and the Panchen Lama, has been born.

The last and the 9th Jebtsundamba Khutuktu had died back in 2012. Now, the 14th Dalai Lama has the power to identify the next Khutuktu in Mongolia. The process to identify the third-highest spiritual figure of Tibetan Buddhism had already begun in 2016 itself.

Why does China want to control the identification process of the Jebtsundamba Khutuktu?

And that’s where regional geopolitics comes into the picture. When the 14th Dalai Lama announced the rebirth of Khutuktu in 2016, it invited a fierce reaction from Beijing.

Beijing has always questioned the Dalai Lama’s authority over announcing reincarnations; instead, it insists on announcing the new Lamas on its own terms. By doing so, Beijing will be able to dilute Tibetan Buddhism by superimposing communist ideology.

Make no mistake, The Panchen Erdeni, the second-most important Lama, has already been recognized by Dharamsala. However, the top spiritual figure was kidnapped by Beijing years ago, and China contested the Dalai Lama’s choice by instating one on its own terms.

Why is China unnerved?

Adding to that, the Dalai Lama’s own succession is also major trouble for China. China desperately wants to identify the next incarnation but the Lama suggested back in 2015 that he might end his spiritual lineage and not reincarnate in future.

If that happens, this would be a nightmare scenario for Beijing. If the Dalai Lama identifies the next Jebtsundamba Khutuktu in Mongolia and refuses to incarnate in the future, it will simply erode China’s power to wield its influence over Tibetan Buddhism in both Tibet and Mongolia.

How China has been trying to control Tibetan Buddhism in Mongolia?

To prevent its worst fears from coming to the realization, China has been trying to dominate Mongolian Buddhism by promoting Shugdenism in Mongolia.

The Shugdenites present themselves as a “genuinely Mongolian sect” with deep historical and religious ties to the country, and their deity, Dorje Shugden, is technically a spirit worshipped across all four schools of Tibetan Buddhism. China supports this sect through its United Front program.

Hence, if the 14th Dalai Lama fails to identify the next Jebtsundamba Khutuktu, China will get a free pass to appoint the next leader by wielding its influence over the Shugdenites.

What is the Mongolian government doing?

Tightening its grip over Tibet is a top agenda for the Chinese communist party given rising resentment among Tibetans. A top Chinese official in Tibet even visited monasteries in and near the Tibetan capital Lhasa this week to warn monks against behaviour considered disloyal to the ruling Chinese Communist Party.

China wants to crush Tibetan culture and wants to stamp its authority over the region. However, Mongolia is proudly standing its way to materialize its ambitions. For the Mongolian government, preserving the Tibetan culture is a matter of national security.

The country is right at the centre of the fight to control Tibetan Buddhism. It’s in the interest of all that the 14th Dalai Lama concludes the process of identifying the 10th Jebtsundamba Khutuktu as soon as possible, and accord Mongolian Buddhist monasteries with the supreme legitimacy over Tibetan Buddhism. And once that happens, it will scuttle China’s ambitions of controlling the Tibetans once and for all.