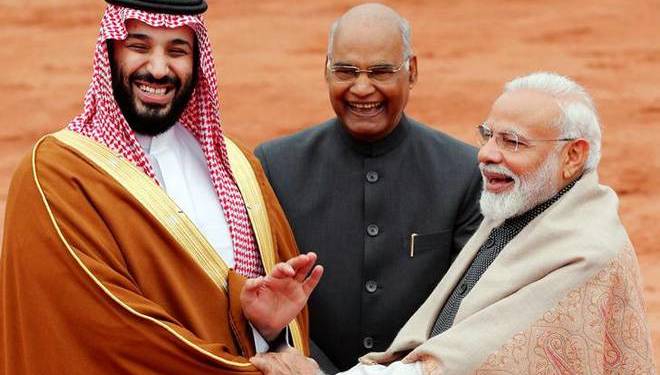 As the Arab world snubs Pakistan, Saudi Arabia is coming a lot closer to India than ever before and is now talking in terms of strategic cooperation with India. Once Pakistan’s guardian angel, Saudi Arabia is now an unapologetic friend of India. Now, Saudi Ambassador to India, Dr Saud Mohammed Al-Sati is contemplating even a military alliance with New Delhi. This could well be the biggest example of how PM Modi’s Gulf diplomacy is paying off.

In an interview with Jagran, the Saudi Ambassador has suggested that a number of new announcements concerning the health and defence sectors could be made between India and Saudi Arabia in the near future. Riyadh’s offer to deepen defence ties with India means that it has now completely given up on Islamabad, and is going to find common ground with New Delhi on issues like counterterrorism, deradicalization and intelligence sharing.

Al-Sati has reportedly said, “Security-related cooperation between India and Saudi Arabia is continuously strengthening. You know, we have signed several agreements. The result of such agreements has also started becoming visible. We stay in touch for the sharing information about terrorist incidents and terrorist organisations. We are also helping each other in combating religious fundamentalism.”

The envoy added, “We have also been in touch for cooperation in the defence sector, including defence manufacturing. Both sides are in regular touch over cooperation in this sector and we are working towards strong cooperation at a military level. Just as energy cooperation is very important between the two countries, we can also make headways in defence cooperation. Saudi Arabia is providing all possible help to India’s energy security and remains committed to fulfil India’s energy needs.”

Saudi Arabia is actually building on the momentum created by Prime Minister Modi’s Saudi visit last year, when Riyadh and New Delhi elevated ties with a Strategic Partnership Council Agreement. At that time, India had also signed an ‘Agreement on Security Cooperation’ with Saudi Arabia to enhance defence and security cooperation with the Arab country.

Saudi Arabia had then decided to collaborate with India in defence sector through the Joint Committee on Defence Cooperation (JCDC), an Indo-Saudi initiative that finds mutual interest in the defence and security sectors. “Saudi Arabia is looking at collaboration with India on defence in terms of procurement and joint production … The talks have been going on for greater defence cooperation and expansion of ties between the two nations for the past six months,” an Indian official posted in Saudi Arabia had said.

India stands to gain big by becoming a major defence partner of Saudi Arabia. First and foremost, India will be able to safeguard its interests in the oil-rich country, while Riyadh will, of course, seek Indian cooperation in diversifying the Gulf economy and insulating it against the disruptions caused by volatility in the oil/energy market.

As such, New Delhi wants to interdict India-focussed terror organisations having financial or fundamentalist links in the Arab region. New Delhi is therefore happy to enhance its security cooperation with Riyadh for understandable reasons. Moreover, the geostrategic significance of Saudi Arabia located close to both Arabian Sea and the Suez Canal cannot be understated.

Saudi Arabia is the world’s largest arms importer and access to its market would immensely help India’s nascent arms industry. Riyadh is interested in buying small arms, military vehicles, and radars from India. Indian companies- Ashok Leyland, Bharat Forge and Ordnance Factory Board (OFB) participated in the JCDC meeting last year. An official had then said, “The Saudi have found traction in what India is manufacturing and what they want to buy.”

India and Saudi Arabia are expanding their defence ties at a time when the United States is holding itself back from playing a dominating military role in the Middle East. As New Delhi and Beijing compete with each other for influence in the resource-rich region and fill in the vacuum that the reduced US presence is creating, India would want to consider playing the net security provider role at some future date. It would be necessary for India to protect its own interests and safeguard critical trade routes/sea lines.

Saudi Arabia’s insistence upon deepening defence ties with India shows how circumstances have changed and New Delhi will have to play a much bigger role in the Middle East security situation, even more so in the backdrop of how the Arabs have deserted Pakistan. A strong military alliance with Saudi Arabia could therefore mark the beginning of New Delhi’s elevated role in the Gulf region and also the rest of the Middle East.