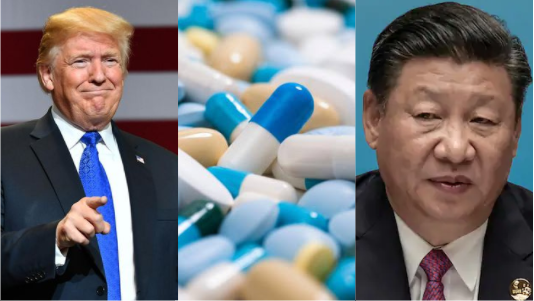 The People’s Republic of China is feeling the heat of international backlash in the aftermath of the Coronavirus pandemic and is seeking new avenues to gain any sort of leverage over the countries that have crossed its way. Now according to a report in South China Morning Post, the super intellectual advisers of the Politburo have suggested the Xi Jinping regime to cut the US access to medicines, exported from the middle kingdom.

As a result, the Chinese government advisors have posited that bleeding dry America by cutting its pharmaceutical line is the best way to gain an advantage over the US, and send a message to the world that Beijing is still very much a dominating figure in the ‘game of influence’.

However, the move, if implemented will be the most absurd and hara-kiri step taken by the Xi Jinping regime in the recent memory.

China is already reeling under the pressure of honouring the first phase of the Trade deal. When in April Beijing insinuated that it was trying to pull out of the Phase-1 deal, US President Donald Trump and Secretary of State Mike Pompeo had given the paper-dragon an earful, and forced the Chinese to meekly go back into hiding.

Cutting the supply will result in America once again waging the Trade War–of which the Chinese do not have any good memories.

American companies moving back to China

Secondly, the step could be disastrous in the sense that all the US behemoth pharmaceutical companies will pull the plug from their Chinese activities and move back to the country. Sure, there might be an initial advantage to the Chinese who would have massaged their bruised egos but in the long run, the factories and the locales of the Chinese villages where these factories are located will be the ones ruing the vanished opportunities.

“If the US decides that China is going to play hardball or use the nuclear option, I think [the government] could politically switch to bringing back manufacturing,” she said. “It will take some time, but in the long term, we will be OK, because the US has the capital and R&D capability,” said Rachna Shah, an associate professor in the supply chain and operations department at the University of Minnesota.

Thirdly, several companies are already packing their bags and moving out of China in the aftermath of COVID-19 as there has been a massive gap in the supply chain. Countries like Japan are incentivizing the companies to jump off the sinking ship of China and move onto cheaper manufacturing hubs like India, Bangladesh or Vietnam. Thinking of giving up the biggest market of pharmaceuticals in normal circumstances was a nonsensical idea itself, but in COVID times, this idea seems preposterous, to say the least.

“This suggestion doesn’t make much sense. It will fail to help China retaliate against the US, it will also ratchet up efforts to further block China’s hi-tech companies,” said Shi Yinhong, an international relations professor at China’s Renmin University and an adviser to the State Council.

Fourthly, picking on the last strand of the third point, the Union Government of India led by Prime Minister Narendra Modi, wants to be the next global manufacturing hub and the engine of world growth.

Behind India’s deft diplomacy and renewed stress on the Indo-Pacific strategy, New Delhi has a single aim of occupying the space that the Dragon occupies. And one of India’s leading manufacturing sectors is the Pharmaceutical sector in which India already enjoys a huge advantage over China.

It must be kept in mind that though India is a supplier of finished drugs to many countries, drug manufacturers import 70 per cent of their API needs from China. Such over-dependence on China is both dangerous and unsustainable.

Therefore, the Modi government is trying to cut dependence on China when it comes to the Active Pharma Ingredients in line with Prime Minister Modi’s Atmanirbhar (Self-reliant) campaign.

In a related report, The Print has stated that the Modi government is likely to announce the final guidelines for its Production Linked Incentive (PLI) Scheme worth Rs. 6,940 crore, which is meant to augment domestic production of the API.

The fact that China has to come up with such ludicrous ideas should be a reason enough for a layman to understand the gargantuan pressure Beijing is under currently. Xi Jinping and his authoritarian regime is trying hard to find some new pastures to ascertain its dominance but the new world order is ready to kill the monopoly of China and, therefore, the leverage it once enjoyed, has blown up into a cloud of smoke.

We are hopeful that sense prevails and Beijing dumps this plan in the dustbin and thinks of something much more creative; but its 2020 and using ‘hope’ and ‘China’ in the same statement will be a travesty.