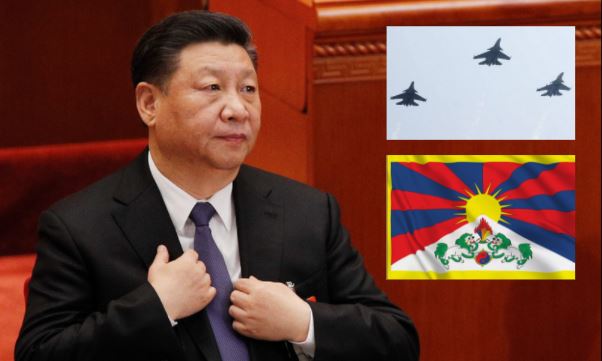 The Chinese People’s Liberation Army Air Force (PLAAF) seems to have given up the fight against India even before it started. With the ongoing military standoff in Eastern Ladakh refusing to die down, there are growing apprehensions of things taking an ugly turn between India and China. Airpower remains crucial for both sides and India seems to be winning the battle given China’s recent military drill in Tibet’s Capital Lhasa.

Last week, it was reported by China’s State-run media that the government of the Lhasa city would conduct an air raid drill on September 19, in a bid to prepare for a possible air raid. The last time such a drill was carried out in Lhasa was in 2009, and therefore the latest announcement has caught attention as it comes amidst the ongoing military standoff at the Line of Actual Control (LAC) in Eastern Ladakh.

Vide a special announcement dated September 14, the Lhasa city government claimed that the drill would “improve the general public’s conception of national defense and civil air defense awareness”. The local government also stated that three different sirens would be played during the air drill. The first one for three minutes from 12 to 12.03pm for 36 seconds with gaps of 24 seconds, the second siren from 12.06 to 12.09pm playing for six seconds with gaps of six seconds. And finally, a non-stop siren between 12:12 and 12:15pm.

Every siren has a meaning here. The first siren is a pre-raid siren appealing the residents to switch off their lights, the second one indicates an actual raid requiring locals to take refuge in air raid shelters and the final one is believed to indicate that the raid is over.

The Lhasa government announcement mandated all  citizens, government agencies, enterprises, institutions, and social organisations to listen and decipher the sirens. It also stated that the drill would be conducted in line with the “People’s Air Defense Law of the People’s Republic of China”.

China’s latest bid to prepare for an aerial assault is an evidence of the panic that the Indian Air Force’s firepower has created in the Chinese psyche. The fact remains that if things escalate to the level of a limited armed confrontation, India is bound to have a major advantage in the airspace.

Tibet’s topography and difficult terrain translates into limited Chinese airstrips that can be pressed into service for pitched battles in the Eastern Ladakh sector. On the other hand, India enjoys a major geographical advantage as the IAF Western Air Command has several bases in Northern India plains from where it can easily reach the Eastern Ladakh region in case things escalate into a limited war.

Moreover, the topography also plays a big role in the kind of payloads that can be carried by the fighter aircrafts. A study by the Belfer Center at the Harvard Kennedy School of Government in Boston stated, “The high altitude of Chinese air bases in Tibet and Xinjiang, plus the generally difficult geographic and weather conditions of the region, means that Chinese fighters are limited to carrying around half their design payload and fuel.”

Also, the IAF is also more capable of mobilising its assets into the Eastern Ladakh sector as against China, which also has to take care of other fronts like the South China Sea and the East China Sea.

Apart from the geographical advantage, the IAF also has a much better combat expertise than the inexperienced PLAAF. The Belfer study stated, “Recent conflicts with Pakistan give the current IAF a level of institutional experience in actual networked combat.”

Moreover, India’s latest addition- the Rafale fighter jets are tailor made to fight it out in inhospitable terrains like Eastern Ladakh. The Rafale fighter aircrafts that India has received  come with unique modifications including the ability to take off from high-altitudes like Leh. So, the next time there is an Eastern Ladakh stand-off like situation, India will have the enhanced ability to overpower the PLA Air Force.

India has been deploying all its frontline air assets- Rafale, Sukhoi-30MKIs, MiG-29s and Mirage 2000s to tackle the Chinese threat in Ladakh. India is showing muscle to an unprepared PLAAF which is clearly pushing it on the backfoot.

It was recently reported by ThePrint that Chinese construction activity, especially for infrastructure related to air defence networks, has also been observed in the border areas. The construction activity suggests IAF can exploit porosity in China’s aerial surveillance along the LAC in Eastern Ladakh in case of a limited confrontation between the two Asian giants.

Clearly, China is frightened by India’s superior air assets, which is why it feels constrained to carry out air safety drills and instill a sense of fear amongst Tibetan locals. India’s Rafales, Mirages and Sukhois are thus helping the IAF win the psychological war against the PLAAF.