Zimbabwe and China – a match made in hell. Zimbabwe allows China to destroy its environment to mine coal. 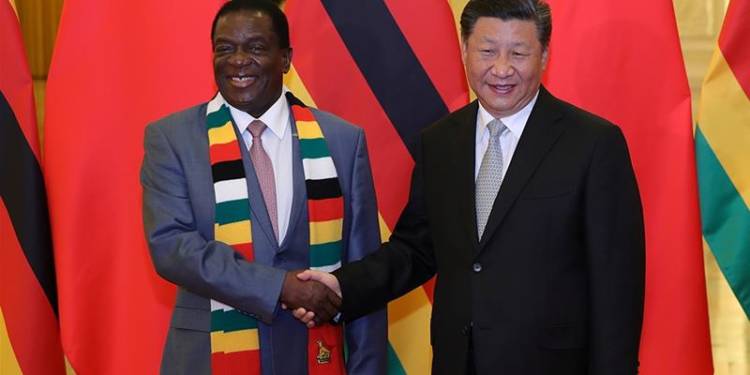 Zimbabwe has seen one of the worst post-colonial transitions, from being the breadbasket of Africa to being the debt basket. Recently, the nation is in news for all the wrong reasons, as per a recent vice reportage, the Zimbabwe government was at the centre of criticism for allotting land in Hwange National Park (one of Africa’s most treasured Natural Reserves/National Parks) to companies from China for coal mining. It was big news internationally because apart from being the most diverse game reserve with 100 mammals and 400 bird species and also being home to the critically endangered black rhinos.

It was first discovered when the rhino monitoring team from Bhejane Trust saw people who they assumed were lost, but after some enquiry, it was clear that they were from Zhongxin Coal Mining Group—and another Chinese company—Afrochine Smelting and they were able to produce documents and permits granted by the government of President Emmerson Mnangagwa.

“You can’t have coal mines in the middle of a national park,” Trevor Lane from Bhejane Trust told VICE News. It will most certainly mess up the ecological balance depleting the tourism potential of the game reserve, and being a safe zone for so many species of animals and birds, it will be morally void and ethically wrong for the Zimbabwe government to allow the mining of coal in the middle of this reserve. As this became international news, criticism landed from all directions, resulting in the government declaring that it will ban all the mining activities. However, these claims were not followed by actions, the world rejoiced on these claims but the activities continued.  The world was shocked by the fact that the Zimbabwe government was willing to open their treasure of national parks for coal mining which will have grave irreversible ecological damage, this brings a very pertinent question to the fore, why was the government not able to take any actions?

The answer is pretty obvious, the country is 6 feet deep in debt, courtesy to Beijing’s Debt Diplomacy, even if the government wanted, it just cannot act against the interests of China. It all goes back to the Mugabe era, due to his racial policies against the white minority, he was side-lined by the USA and other western democracies, as a result, he turned east and found a friend in China. Since then, like much of Africa, it has a strong presence in Zimbabwe, with investments spanning from energy to agriculture, mining and trade in wildlife. Being so entrenched into the Zimbabwean economy, one can imagine the extent of debt China has poured into it, and thus compromising the sovereignty of the recipient country in the process.

Since the early 2000s, when the western democracies put sanctions on Zimbabwe, China has been pouring in billions, it has built the military academy, parliament building, railways and roadways and other infrastructure. One can compare it to the colonial enterprise in India, where the British built the railways to get the raw material and natural resources out to the ports.

As for Zimbabwe, the preposition of a giant Thermal Power Plant, with the capacity to generate 2,800 Megawatts of electricity is highly lucrative, as it will make the country energy self-sufficient and provide much-needed jobs as well, but it comes at a very serious cost. At the cost of its hard-earned sovereignty.

The Chinese attempt to force Mandarin as a language is a very obvious attempt at establishing cultural supremacy in the many African nations including Zimbabwe. The Chinese enterprise in this southern African country is a part of the larger trend to capture any and every possible source of natural resource, & given the economic vulnerability of these resource-rich countries, debt diplomacy remains the most effective and potent means of controlling these natural resources for its own interests.

The country certainly does not want to have an eastern colonial power ruling them, instead of western imperial power and it was not something Mugabe had meant when he proposed looking towards the east from where the sun rises. The Zimbabwe-China relations are a match made in hell because they bring the worst out of these nations and are based on selfish and short term interests.

Russian meddling? Putin snatches the juiciest poll issue from the democrats as Russia warms up to the US