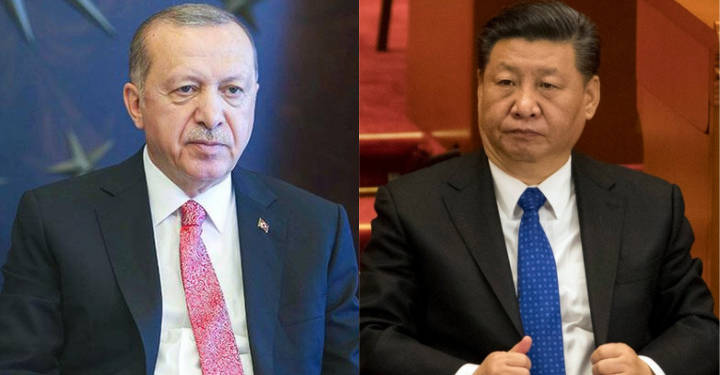 Turkish and Chinese brands of revisionism are reaching such toxic levels that Turkey and China now seem close to crossing swords with each other. Till now, Turkey was fast-turning into a Chinese Client State, but now things seem to be changing. Chinese and Turkish expansionism seems to be militating against each other all of a sudden.

Turkish President Erdoğan’s brazen Islamism and push for Turkic chauvinism in Central Asia, Turkish expansionism into South Caucasus, and Ankara’s latest diplomatic offensive against China over human rights violations of Uyghur Muslims in Xinjiang, are putting China and Turkey at loggerheads with each other.

Till now, Ankara was falling prey to predatory Chinese investments in the background of a severe economic slowdown and Lira currency crisis. Erdoğan was, therefore, virtually selling away his country to the paper Dragon. It is also not much of a surprise in this context that the Turkish President, despite being the wannabe Khalifa that he is, used to gloss over the issue of human rights violations in Xinjiang.

Uyghurs are not just Muslims, but they are also Turkic, which should have evoked not only Erdoğan’s Islamism but also his Turkic chauvinism. Yet, Turkey not only remained silent on the issue of Uyghur concentration camps but also got accused of deporting Uyghurs living in the country to China.

But then for how long could Erdoğan resist the duties that come along with being a wannabe Khalifa? Ankara has now finally expressed concern over the ongoing human rights violations of Uyghur Muslims in China-administered Xinjiang. At the United Nations General Assembly (UNGA), Turkey has requested that the cultural and religious identity of Uyghur Muslims be respected and protected.

Turkey’s National Declaration to the UNGA’s Third Committee (Social, Humanitarian & Cultural Issues) read, “We attach importance to the role of the UN in addressing the concerns and expectations of the international community regarding practices against Uyghur Turks and other Muslim minorities in Xinjiang.”

And raising the Uyghur issue is not just a product of all the pressure that Erdoğan faces as a result of his Caliphate ambitions. Turkey also feels compelled to rake the Uyghur human rights violations issue because of its own Turkic ambitions in Central Asia and South Caucasus regions where China also wants to become influential.

Presently, Turkey is deeply involved in the Azerbaijan-Armenia clashes. Turkey is brazenly backing Azerbaijan, a Muslim-majority country with a Turkic dimension. In the process, Turkey is also eating into the Chinese sphere of influence in the Caucasus and to some extent even the Middle East.

Moreover, Turkey’s South Caucasus expedition does have a Central Asia link also. Turkey lacks a direct link to Central Asia, and the only roadblocks are Armenia and the Nagorno Karabakh Republic. Attacking Armenia and taking control of the Nagorno-Karabakh region is, therefore, a part of Erdoğan’s dreams to unite the Turkic world from Central Asia to Turkey under Ankara’s leadership. Turkey’s lofty ambitions, however, carry dangerous undertones for the paper Dragon.

Firstly, any substantial rise in Turkish influence could spoil China’s own ambitions to eat into Russian influence in the post-Soviet Central Asian Republics. And secondly, Erdoğan’s Turkic push in Central Asia could easily internationalise the Uyghur Muslims human rights issue.

If Ankara makes an entry in Central Asia, then China’s Uyghur-Islamist nightmares will certainly come true. Xinjiang, where the Uyghur Muslims are being tormented by China, is itself culturally and linguistically closer to Central Asia than to China. There is simmering discontent within Central Asian countries like Kazakhstan and Kyrgyzstan over how Uyghur Muslims, who are also Turkic Muslims just like Kazakhs and Kyrgyz, are being tormented by China.

Moreover, Chinese concentration camps are also cracking down on 1.5 million Kazakhs and more than 200,000 Kyrgyz who live in Xinjiang. Till now, China has been able to buy the silence of governments in Kazakhstan and Kyrgyzstan. However, if Ankara comes in with relentless Turkish propaganda, then China might suddenly find Uyghur cause rapidly gaining traction in Central Asia and the rest of the world.

Turkish expansionism goes as far as Central Asia and therefore creates separatist threats in China’s Xinjiang. The Rogue States of Turkey and China are, therefore, on a collision course, and the authoritarian best friends are very close to starting to fight each other.