After weeks of wooing Suga and failing, a frustrated China sends vessels back to Senkaku Islands 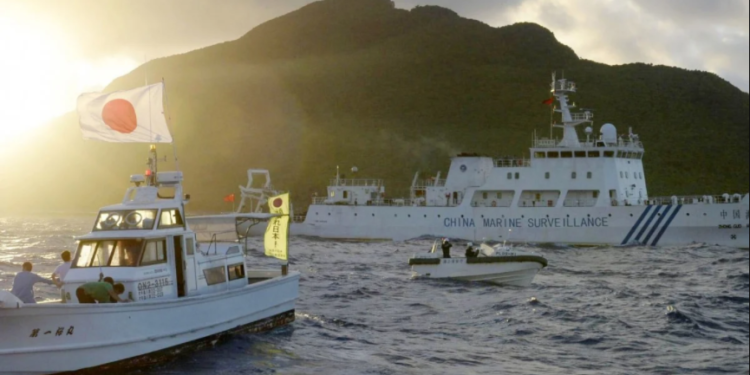 Xi Jinping seems to have lost it. After spending weeks at wooing the new Japanese Prime Minister Yoshihide Suga, China is back at being its usual self, i.e. being a bully. Frustrated Beijing has sent vessels into the waters of Senkaku Islands after a long hiatus which commenced on 28th August.

Japan has strongly protested against the intrusions. On Monday, it launched a diplomatic protest with Beijing after two Chinese coastguard vessels entered the waters around Taisho Island, i.e. one of the Senkaku Islands at 10:47 AM. Chief Cabinet Secretary Katsunobu Kato gave out this information during a scheduled press conference in Tokyo.

This incursion in Japanese Sovereign waters has come just after the anti-submarine drills conducted by Tokyo in the South China Sea. However, it looked that China would just launch a protest against the drills and get back to reconcilingits bilateral relations with Japan.

China, too, has been claiming these Islands for long, based on frivolous historical facts, mostly a Communist Party of China’s concoction. The real interest of China lies in the possible Oil &gas reserves in the East China Sea, which comes under the Exclusive Economic Zone of Japan due to its control over the Senkaku Islands.

Beijing seems to have given up entirely on the efforts of wooing Tokyo. With this action, the days of restraining are over, and the Japanese comments confirm it. Kato-san said “We will continue to act calmly but firmly regarding China,” adding “we will continue to patrol and maintain surveillance around the Senkaku Islands to ensure a safe fishing environment.”

Japanese PM Yoshihide Suga is not shying away from consolidating an alliance of countries against Chinese interests. Suga-san is maintaining a strategic silence about the long-overdue state visit of Xi Jinping to Japan and did not even mention it in his telephonic conversation with Xi Jinping.

All of this, combined with the anti-submarine drills in the South China Sea, seems to have irked China and all hope of bringing Japan to its side have perished. Although Japan has been signalling its intentions, China has taken its own sweet time to get the message.

Prime Minister Yoshihide Suga is proactively seeking alliances in the Indo-Pacific with the implicit intent of containing China and an explicit declaration of maintaining free and open Indo-Pacific. Under his leadership, Japan has become more dangerous for China, and it has not even been an entire month since he took office.

Under its ‘destabilize neighbourhood first’ policy, China is bullying Taiwan as well. With frequent violations of Taiwanese sovereignty, be it through aircraft manoeuvring or movements of naval patrol vessels in Taiwan’s part of Taiwan Strait. At the same time, Japan under Suga-san is reaching out to Taiwan and is standing shoulder to shoulder with it.

Read more: Japan and Taiwan haven’t exactly been the best of friends, but China is bringing them closer

The QUAD meeting concretized the speculation of Japan bringing countries together to counter Chinese belligerence. The Japanese in the recently concluded 2nd ministerial QUAD meet had raised issues pertaining to East & South China Seas. The meet has been a game-changer & as per analysts, provides a platform to unite against any unilateral attempt to change the statusquo in the Indo-Pacific region.

Suga-san is also going a step ahead of his predecessor. He is adding his jazz to the Shinzo Abe’s proactive foreign policy. He is trying to solve the biggest hurdle in creating a united front against China, i.e. the South Korea-Japan relationships and is reaching out to South Korean leadership with a message of constructive and positive dialogue between the two democracies.

Combine all this, and then anyone can understand why is Beijing frustrated. And in the frustration, Xi Jinping has ended his sham of being a good and responsible neighbour. He is showing his true nature by restarting military intimidation towards Japan in the East China Sea and the Senkaku Islands.

After propagating Sun Tzu’s Art of War all over the world, Beijing itself has forgotten about his teachings. Giving in to anger and frustration is the first step to demise, and Yoshihide Suga has been successful in forcing China to commit that folly. As China becomes aggressive again in the East & South China Sea, it is bound to face a more coherent and united opposition for its actions.

Merkel wants to get rid of her pro-China image, but her past won’t let her