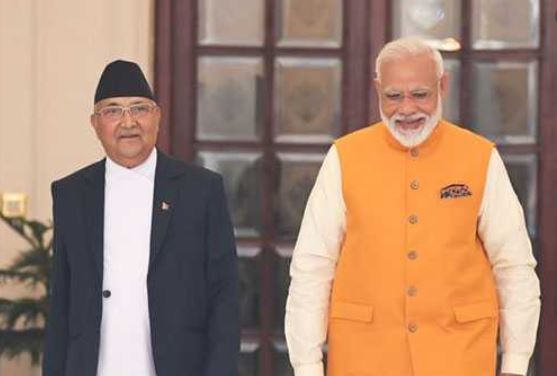 It seems that China’s marriage with Nepal was short-lived as the latter appears to be surprisingly determined to divorce China. As the China-made pandemic spread its deadly wings across the world, the romance between China and Nepal blossomed which stumped the most experienced of the foreign relations experts as Nepal which shares a great cultural heritage with India, took a decidedly anti-India stance under Chinese influence. In what can be read as a move to win back India, Nepalese PM KP Sharma Oli has shunted out Deputy PM Ishwar Pokhrel – a rabid India hater, out of the Defence Ministry. The move coincides with the news of Army Chief General Naravane visiting Nepal in a bid to repair the ties between the erstwhile traditional allies.

In Wednesday’s cabinet reshuffle, Nepalese PM KP Sharma Oli in a bid to reset the equations with India shunted out his Deputy PM Pokhrel from the Defence Ministry. The removal of Pokhrel is significant as he had irreparably damaged ties with India with his series of anti-India statements including some statements against Indian Army’s deep ties with Nepal.

Oli himself is now holding the charge of Defence Ministry in a carefully timed move as Indian Army Chief General Naravane is slated to visit Nepal on November 3. This leaves Ishwar Pokhrel who is attached to the Prime Minister’s Office, as a Minister without any portfolio.

In May, General Naravane had hinted at Chinese hand in Nepal’s shrill reaction to an 80-km road to Lipulekh built for pilgrims to Kailash Mansarovar in Tibet, resulting in a deplorable reaction from Pokhrel who in turn, attempted to provoke the Indian regiment of Gurkha soldiers who are an integral part of the Indian Army.

Claiming that General Narvane’s comments had “hurt the sentiments of the Nepali Gurkha army personnel who lay down their lives to protect India”, Pokhrel stirred a hornet’s nest by stating that the Gurkha soldiers in the Indian army wouldn’t respect their superiors after General Naravane’s comment.

Hence, it doesn’t come as a surprise that Pokhrel was vociferously opposed to the visit of General Naravane and instead pushed for India to first discuss the boundary dispute between the two countries.

Blinded by his hate for India, it is reported that Pokhrel would also have run-ins with Nepalese Army Chief General Purna Chandra Thapa for his refusal to toe the government’s line on Lipulekh and issue a statement.

Due to his position as one of Oli’s most trusted lieutenants, Pokhrel was given the charge of leading Nepal’s fight against the Wuhan coronavirus which has been marred by allegations of corruption in the procurement of medical equipment from China.

Oli’s decision to make Pokhrel redundant is a clear cut indication that he wants to reset the ties with India. In yet another indication, during General Naravane’s visit to Nepal, he will be conferred the honorary rank of general of the Nepali Army by Nepal’s President Vidya Devi Bhandari.

Nepal is reciprocating the long-standing convention between the two countries as Nepal Army Chief General Thapa was conferred the honorary rank of general of the Indian army in January 2019.

After exulting a false sense of bravado by issuing new textbooks with a changed Nepalese map which now claimed Indian territories, the Nepalese government stopped the distribution of the controversial textbook.

The recent events clearly indicate that Nepal and China are headed for a bitter divorce.