After removing its pro-China defence minister, Nepal begins a battle against China at the border 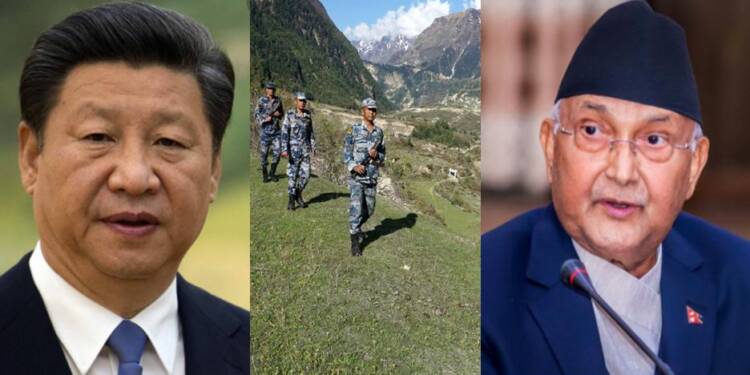 As if realising its folly, Nepal is quickly changing tracks and is increasingly drifting towards India. The short-lived marriage with China resulted in little rewards for Nepal as the former, true to its characteristics, started illegally encroaching on Nepalese territories resulting in the PK Sharma Oli government being put under the scanner.

Waking up from its slumber, Nepal is finally setting up border outposts along its border with China, as the Himalayan nation stands up to Chinese aggression. This comes in the backdrop of the snatching of the Defence ministry portfolio from the pro-China politician, Ishwar Pokhrel.

The Oli government was recently put in a spot when the news of China illegally having built 11 buildings in Humla with a border pillar missing, trickled out, resulting in protests outside the Chinese embassy in Kathmandu resulting in clashes.

While the Oli government initially took no action over China’s continual grabbing of Nepalese territories, it seems that the push has come to the shove, as the Nepal government is now setting up border outposts on its side of the border in the district of Humla.

The 6 Border Observation Posts (BOPs) have been set up at Hilsa in Humla district, Koral in Mustan district, Tatopani in Sindhupalchok district, Karung in Rasuwa district, Kimathanka in Sankhuwasabha district and Olangchung Gola in Taplejung district.

After locals flagged concerns that China was constructing building 2 kilometres inside Nepalese territory, the Chinese embassy attempted to brazen it out. “China and Nepal are friendly neighbours. China has always respected Nepal’s sovereignty and territorial integrity. The building mentioned by the media has been verified to be on the Chinese side of the China-Nepal border and Nepali side may make verifications again. China and Nepal have no territorial disputes. The two sides have always maintained close communication on border affairs,” said a spokesperson of the Chinese embassy in Kathmandu.

Earlier in June, China quietly occupied the territory of Nepal’s Rui village. The Chinese government even removed signboards in the Nepali language to legalize the occupation and has added it into the Tibet region.

Nepali journalist, 50-year-old, Balaram Baniya who exposed the Chinese encroachment in Rui village was found dead under mysterious conditions in August. The journalist’s body was found at the banks of Bagmati River with his death shrouded in mystery as his tragic demise came close on the heels of his article highlighting the Chinese encroachment in Rui village.

In August, China illegally grabbed Nepalese land in at least seven bordering districts. Nepali government agencies data reveal that China is gradually moving forward in these districts with the ultimate agenda of encroaching upon more and more landmass.

More worryingly for Nepal, the official estimates of China encroaching Nepalese land in seven bordering districts is likely to be underreported with the scenario expected to be much worse.

It seems that Oli has had it with China and with India in tow, especially after removing the pro-China Defence Minister, Ishwar Pokhrel and the next month’s visit of Indian Army Chief General Naravane to Nepal, Kathmandu is emboldening its stance as it seeks to take on the paper dragon to protect its sovereignty.