Taiwan is a Chinese province as per IMF. Looks like the Chinese Yuan has reached the IMF too 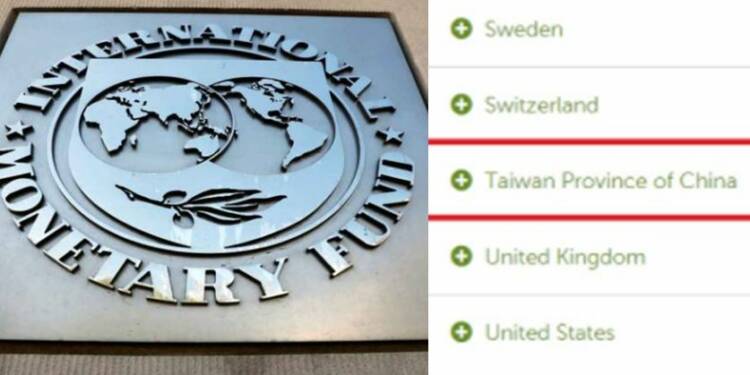 WHO’s handling of the Coronavirus, correction: china virus was unnervingly palpable. The Chinese influence, despite its low funding, read $38 million, had sneaked its way into the upper echelons of the WHO. While the world suffered through one of the worst global pandemics in its history. WHO was awaiting further instructions from the CCP.

It seems like the Chinese Yuan has once again reached the same echelons in yet another world organization. This time it is the International Monetary Fund. The IMF’s job is to encourage economic stability and global growth. But with the minute details inside a forecasting report it published, has given rise to instability in an already sensitive geopolitical area.

Tensions in the Taiwan Strait are high, a routine US warship transit in the region drew an overboard reaction from the cronies at the CCP. They were rattled with the support Taiwan had garnered from two of the world’s major powers despite Chinese warnings.

Therefore, the IMF’s report to mention Taiwan as a Chinese province is not just inappropriate but shows the level of cynicism the Chinese would go to propagate their ONE-CHINA THEORY.

In the same report, the IMF has also stated that China has now displaced the United States to become the largest economy in the world. The IMF report shows that China’s economy is one-sixth larger than the US’.

Read More: China Is Now the World’s Largest Economy. We Shouldn’t be Shocked

IMF also lowered its projection for Taiwan’s economic growth to minus 4.0 per cent from 2.0 per cent in the World Economic Outlook Report.

The IMF, just like the WHO, is in a sad state of affairs. These world organizations responsible to safeguard Health and promote Economic stability have been stripped of their legitimacy by acting as Chinese propaganda organizations. Being a world body, it does not even include Taiwan.

US President Donald Trump in a press conference in May announced that the United States would be leaving the WHO, during the press conference he presented a list of WHO’s recent failures; one of them was the failure to follow up when Taiwan, a country excluded from the WHO under Chinese pressure- inquired about evidence that seemed to indicate that the virus could be transmitted from one human to another, or just even the failure of WHO to press China to accept an international investigation into the source of the virus.

Taiwan’s Ministry of Foreign Affairs (MOFA) hurriedly issued a statement that read “It is highly regrettable that the IMF has inappropriately labelled Taiwan as a ‘Province of China’ in its data mapper. MOFA is calling on the IMF to maintain objectivity and professionalism and to immediately correct Taiwan’s designation.”

By increasing its influence on international organizations, China is trying to strengthen its position against the United States. The United States is its biggest adversary and also the biggest deterrent in China’s rise to superpower status. Chinese influence in these world organizations shows that China is completely committed to destabilizing the international structure, but it remains to be seen whether China can burden the share of the US’ load as the US slowly moves out of world organizations. The paper dragon has thus far failed to provide the evidence it can, as after the USA’s exit it was the United Kingdom, not China that increased their share of donation to the WHO.