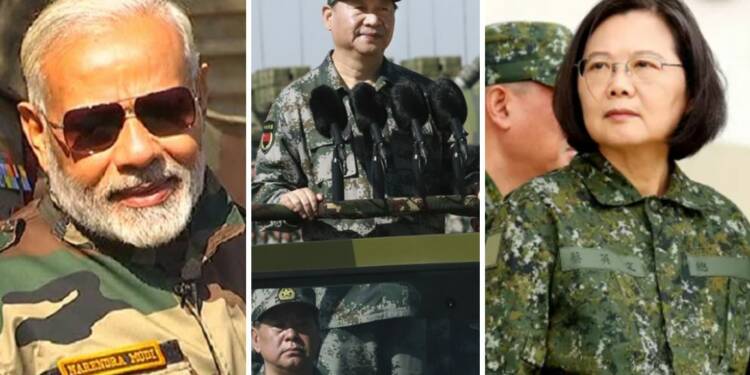 As China’s ambitions to bully India in Eastern Ladakh get buried deep in Himalayan snow, Xi Jinping has found a new plan to save face, that is, by bullying Taiwan. The Chinese People’s Liberation Army (PLA)- the armed wing of the Chinese Communist Party (CCP) is reportedly increasing its deployment along its Southeast coast. According to SCMP, military observers and sources say that China is preparing a possible Taiwan invasion.

But the reality is somewhat different. Another SCMP story claims that as per analysts, China is pushing a new strategy to carefully step up military pressure on Taiwan, but Beijing doesn’t want to provoke a real war. The Chinese military manoeuvres are therefore nothing more than desperate war hysteria on China’s part.

China has reportedly deployed its frontline military assets like its hypersonic missile DF-17 in its Southeast coast region. SCMP quoted a source as saying, “The DF-17 hypersonic missile will gradually replace the old DF-11s and DF-15s that were deployed in the southeast region for decades.” The source added, “The new missile has a longer range and is able to hit targets more accurately.”

According to Andrei Chang, editor-in-chief of the Canada-based Kanwa Defence Review, China has also deployed the Russian S-400 Triumf air-defence system around 600 kilometres away in order to tackle any aggression by the Taiwanese Air Force. Taiwan hasn’t shown any aggression against China, and in that context, the Chinese deployment seems more like a desperate attempt at power projection, as compared to a well-thought-out military move.

Xi Jinping, the CCP General-Secretary has, therefore, managed to divert domestic attention towards Taiwan. Xi Jinping’s PLA troops have been thrashed by the Indian Army and other security forces at the Line of Actual Control (LAC) in the Eastern Ladakh sector- the de facto Indo-Tibet (China-controlled) border. Therefore, the PLA must bully someone for the sake of its fragile ego and diverting public attention away from its losses at the Indian border.

Bullying Taiwan after getting thrashed by India helps the Chinese Communist Party (CCP) regime to comfort Communist hardliners who tend to hate Chinese adversaries like India and Taiwan.

And in fact, Xi Jinping’s plan to divert local attention towards Taiwan started last week itself, when the CCP General-Secretary visited a military base in the southern province of Guangdong. During his visit to the military base, Jinping told PLA marines, “[You should] focus your minds and energy on preparing to go to war, and stay highly vigilant.”

The CCP General-Secretary also said, “Marines have many different missions and the demands on you will vary,” and added, “As such [you] should base your training on [the need to] go into battle … and raise [your] training standards and combat ability.”

And little less than a week after Jinping addressed the PLA marines, reports of China preparing for war against Taiwan started flooding in, which is something that the CCP and the PLA really wanted after being made to eat humble pie by India.

Now, China is looking to scare the tiny island nation of Taiwan, with reports of Chinese jets intruding into Taiwan’s airspace and engaging in intense dogfights with Taiwanese fighter jets. China’s broader plan is not to go to war with Taiwan, but to keep the war hysteria alive and force the tiny island to mobilise and exhaust all its resources in meeting the China threat that persistently lurks around it. A kind of psychological torment. But Taiwan has been preparing for a military conflict for the past 70 years, and that too with a single-minded focus on China.

The fact remains that the invasion of Taiwan is a bloody, logistical nightmare due to adverse geography- one that the People’s Liberation Army is too inexperienced to handle. Beijing, of course, has no intention of waging war against Taiwan or making an attempt to invade the island nation.

It is not easy to overwhelm Taiwan militarily especially when one brings the United States into the equation. The Taiwanese military might is growing significantly, partly due to Taipei’s proximity to Washington. And therefore, China is looking to exhaust Taiwan by forcing it to stay alert, rather than overpowering it.

China knows that it cannot strong-arm India, and the only option left is to flex its muscle against Taiwan. Chinese mobilisation from here on out might be more and more focussed towards Taiwan, as Jinping makes a desperate attempt to divert attention from the Himalayan setbacks that China has suffered at the hands of India.