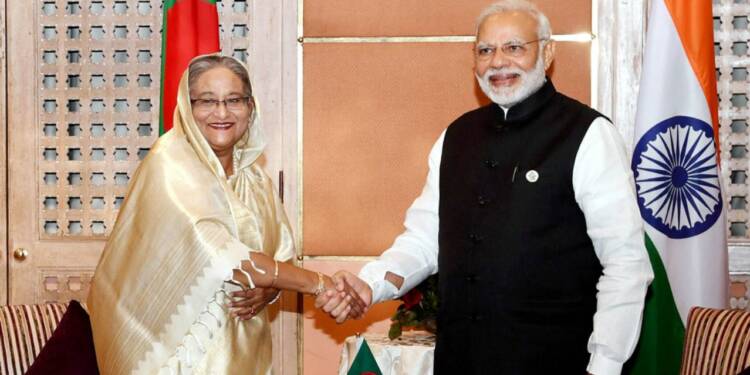 Over the past few years, Bangladesh due to its strategic location, has become a bone of contention between India and China as both the nations jostle for increasing their respective sphere of influence in the country. While Bangladesh and India have been historically closer since 1971, China has thrown its hat into the ring, as it attempts to make Bangladesh its latest victim of the infamous debt-trap diplomacy with the ultimate aim of cutting India off its Northeast which is often described as “chicken’s neck” with Bangladesh lying on the other side of the narrow 22 kilometres Siliguri corridor which connects India to its north east. In a clear cut signal to China and Pakistan, Bangladesh has invited Prime Minister Modi for the country’s Independence Day celebrations.

In a move that will give third degree burns to China and its client state, Pakistan, Bangladesh has invited Prime Minister Narendra Modi to visit the country on March 26 next year in person to jointly celebrate the Independence Day of Bangladesh. In principal, India has accepted Bangladesh’s invitation.

In a statement signifying the closeness of the bilateral relationship between the two countries, Dr Momen said, “Our victory is India’s victory. We should celebrate together.”

Bangladesh Prime Minister Sheikh Hasina and PM Modi are also slated to meet at a virtual summit in December.

Earlier this month, Bangladesh seemingly prioritising India’s interests over China, it scuppered the Sonadia Deep-Sea Port Project which was supposed to be jointly developed with China.

The port situated on the Bay of Bengal would have further enhanced China’s economic and strategic ambitions as the dragon was keen on both constructing and financing the project.

Instead, Bangladesh will now develop a deep-sea port at Matarbari, 25 km away from Sonadia with the help of Japan, with the port expected to be functional by 2025. It is pertinent to note that Japan and India share close relations and India will have no qualms about Japanese involvement in Bangladesh.

India feared that the Sonadia port will eventually meet the same fate as of the Hambantota port in Sri Lanka where the latter had to handover the substantial administration of the port to China as it failed to repay the unsustainable Chinese loans.

The fact that Bangladesh is now developing a deep sea port just 25 km away from Sonadia, albeit with the help of Japan – a close ally of India – signals that Bangladesh didn’t want to hamper India’s interests and prefers India over China.

China’s worst fears are coming true as Bangladesh takes a decided step towards India with Xi Jinping increasingly isolated in the region. Pakistan on the other hand, is living in an alternate reality, where Bangladesh and its people love Pakistan, however, the reality is that Bangladesh can never forgive Pakistan over the war crimes it committed in 1971. India played a major role in helping Bangladesh gain independence from Pakistan which was achieved through a bloody war which saw approximately 30 lakh Bangladeshis getting killed.

“(However,) Pakistan has not yet apologised for the genocide it committed during the 1971 Liberation War. We want to maintain friendship with everyone but how is that possible if they could not make an apology,” said Momen in July.

State Minister for Shipping, Khalid Mahmud Chowdhury echoed similar sentiments as he stated, “There are still some unresolved issues between us. If they want to strengthen relations, then they have to resolve those first. Bangladesh gained independence through bloody war, not through table discussion.”

The invitation by Bangladesh to PM Modi, will now result in Xi Jinping and Imran Khan Niazi banding together and crying endlessly in a cozy corner as they lament how they have literally no one except each other.