Clear battle lines are being drawn 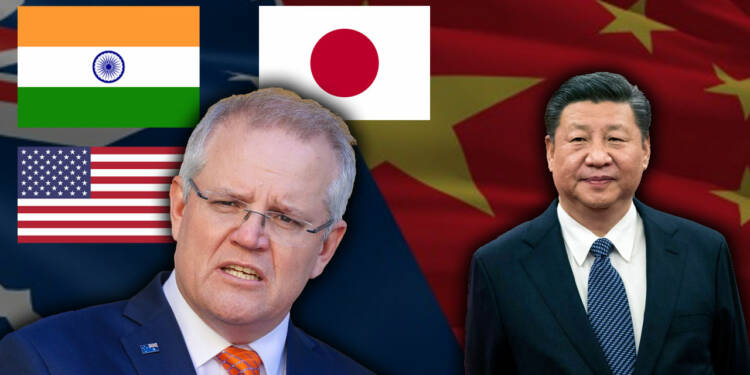 As tensions between the QUAD and China escalates, clear battle lines are being drawn. And Beijing seems to have picked a vulnerable Australia as a part of its offensive diplomatic strategy. While the US, Japan and India may be too big to target for the paper dragon, Australia looks like a weakling due to its small economy and export-dependency on China. In fact, China has started a tariff war of sorts against Australia, targeting Australian products like wine, beef and barley.

Now, the CCP has reportedly halted Australian coal imports also. Chinese customs authorities have asked state-owned steel manufacturers and power plants to stop importing Australian coal. Beijing is thus escalating its tariff war against Canberra, and the coal import ban could lead to Australia losing $15 billion a year. On the other hand, China’s relentless tariff war against Australia has led to the rest of the QUAD rushing in to protect Australia.

The Sino-Australian economic ties have been deteriorating ever since the Scott Morrison government in Australia started speaking up against China’s growing global influence. It is not as if Australia fell into this position unwittingly. Scott Morrison was aware of economic dependency on China all along.

China happens to be, by far, the biggest trading partner of Australia contributing as much as US $194.6 billion worth of imports and exports to the Australian economy. Australian Universities too are heavily dependent on Chinese students. Yet, leaving all this baggage aside, the Scott Morrison government decided that it would take on the paper dragon. Morrison made it clear, “We are an open-trading nation, mate, but I’m never going to trade our values in response to coercion from wherever it comes.”

However, Australia’s dependency means that China will target Canberra relentlessly. In the case of Japan, the US and India, China doesn’t have much leverage. And in fact, in the case of these three countries, it is China which is getting decoupled unwillingly.

While the Trump administration in the US has ravaged the Chinese economy with a trade war, India is banning Chinese apps and constantly looking to cut imports coming from the paper dragon. Similarly, Japan is encouraging its manufacturers to move out from China and relocate themselves in other countries like Vietnam and India.

Therefore, China’s diplomatic language against India, Japan and the US has also remained somewhat measured. Even though there has been a clear hint of aggression against the US and India in China’s diplomatic language, Beijing still hasn’t crossed the red line in diplomatic engagement with Washington or New Delhi. On the other hand, China keeps saying nasty things about Australia. Chinese state media, for instance, called Australia “a bit like chewing gum stuck on the sole of China’s shoes.”

With such foul-mouthing China is trying to show that Canberra is the weakling amongst China’s rivals. This is what also explains China’s 80 per cent tariff on Australian Barley or the ban on imports from four Australian abattoirs. In case of India and Japan, the Xi Jinping administration has taken no such steps, despite the military tensions between India and China in Eastern Ladakh, and the Sino-Japanese standoffs in Japanese waters near the Senkaku Islands.

And therefore, the QUAD has had to come in. If China continues to decouple Australia economically, then there will be a lot of vacuum to fulfil. It is for this reason that India opened its doors to Australian Barley after the paper dragon imposed hefty tariffs on the product.

Australia, Japan and India are together planning a trilateral Supply Chain Resilience Initiative (SCRI) to reduce China’s foothold in the global supply chain. Such initiatives would help insulate Australia to some degree from China’s adverse economic action. Ultimately, the QUAD would look to end Canberra’s heavy reliance on exports to China.

Canberra itself is looking up to QUAD to help out the Australian economy in face of deteriorating Sino-Australian relationship. Even after a recent QUAD meeting on October 6 in Tokyo, the Australian Foreign Ministry stated, “Ministers agreed on the importance of strengthening the resilience of regional supply chains.” Before the meeting, it was being reported that Australia would discuss critical supply chains with India, the US and Japan.

Beijing is therefore constantly targeting the Australian economy, but Canberra remains unfazed. The Scott Morrison government has chosen the QUAD over Beijing, and the QUAD is also promising to go all out to protect Canberra from a predatory China. The battle lines are drawn- China will target Canberra, but the QUAD will not let the Communist-authoritarian nation overpower Australia.