If one has to rank Chinese statements that did not age well, this will make it into the top ten list. 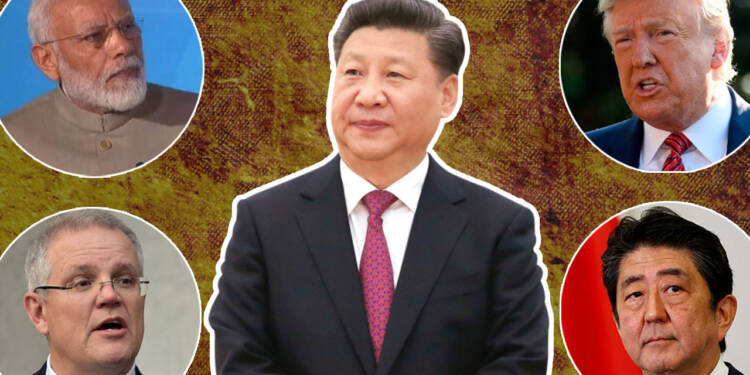 For all the hype Chinese foreign policy experts garner, they have been proven wrong many times. The journey of the Quad is one of the many examples which debunk the hype. China’s transition from calling the Quad “Sea Foam” which will dissipate in no time, to now describing the Quad as an “Indo-Pacific NATO” is worth exploring.

During the press conference at the sidelines of the National Peoples Congress (NPC) in 2018, Chinese Foreign Minister Wang Yi described the revival of the Quad, an informal grouping of India, Japan, Australia and the US, as a “headline-grabbing idea” but as per him, they were “like the foam on the sea” which will dissipate as time passes. If one has to rank Chinese statements that did not age well, this will make it into the top ten list.

After two ministerial-level meets, China is forced to acknowledge the lethality of a formalised Quad. During his Malaysian trip, Wang Yi on 13th October 16, 2020, said that the Quad was an effort of the USA to build an Indo-Pacific NATO. The statement was sensational on two counts. One, the movement of the Quad towards becoming an institutionalized organization has made the Chinese jittery. And two, the Chinese are forced to bring into use the geopolitical term Indo-Pacific which they had ignored and instead used the term, Asia Pacific.

Read more: China is so rattled by QUAD that it has started calling it the Indo-Pacific NATO

2018 seemed to be a great year of Chinese Foreign Policy with over 100 countries looking at the Belt & Road Initiative as a good perspective policy initiative. However, after two years of extensive debt-trap and wolf warrior diplomacy, excruciating human rights violations (inside its borders), failed attempts at African colonisation, and the Coronavirus pandemic – Communist China is in its worst-ever position.

China, a couple of years ago, tried to showcase itself as a responsible rising power, which was ready to work shoulder to shoulder with other countries for the development of the whole humankind. It tried to signal to the world that Beijing as a great power will be better than the USA. However, implicitly, they were practising a policy of covert colonialism in the hope of replacing the USA as the world’s superpower.

Read more: Trump doesn’t want to be the father of the world but he definitely wants the Quad to take care of it

These implicit tendencies have become established facts by the second half of 2020, and all the people who were doves have become hawkish towards China’s intent. A major part of the world now understands that China wants to revive itself as the middle kingdom, that is, become the all-powerful despot of the world. The world is flocking together to resist China and maintain the multipolar world order.

While China has been acting like a bully taking over swaths of lands from countries, aggressively claiming border regions from neighbour countries among other things unbecoming of a responsible country, the Quad countries are increasing bilateral engagement among each other as well as creating multiple minilaterals with other like-minded countries.

The multilateral military & naval exercises among the Quad members, be it USA-India-Japan (MALABAR exercise), India-Australia, India-USA, Japan-Australia-USA as well as with other countries be it, USA-Philippines-Japan, etc, all have increased the practical military capability of these nations to work together in case the need arises.

Many experts too have suggested that Quad is about to be formalised and it will become official as soon as the MALABAR exercise includes Australia in its annual drills. The only country which was earlier reluctant to formalise the Quad, that is, India has been forced by the Chinese aggressive border actions to shed its reluctance.

The formalisation of the Quad and China perceiving it as a threat by calling it Indo-Pacific NATO is a development that is bound to shape the future of the world. The romantic story of the rise of China is going to see an abysmal ending. The Chinese have understood that the Quad will be the Brahmastra which will be the end of Xi Jinping’s age of bullying & intimidation.

Read more: Welcome Australia, US and Japan! The QUAD will be conducting a joint naval exercise in India’s backyard

The Quad is bound to become an organization that will attract like-minded countries to be part of the extended Quad and become an institution for redressal of grievances against the Chinese Communist Regime. The Quad’s emphasis on the centrality of ASEAN also acts as a balancing weight against Chinese adventurism in the region.

China is royally unnerved as Xi Jinping’s China Dream has been shattered even before it could take shape. The Chinese acceptance of Quad as the Indo-Pacific NATO within 2 years of ridiculing it gives an idea that it fears the Quad could do to China what the NATO did to the USSR, that is, contain the nation-state long enough so that it crumbles from within.