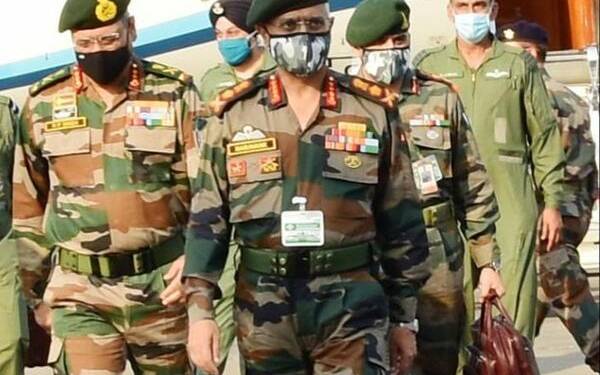 After the Galwan valley clash between the Indian Army soldiers and the Chinese PLA troops in early June, border tension along the LAC has been a common feature as India continues to batter the Chinese wussies with its superior might. With a harsh winter in the offing, and the Indian side all set for the long haul to drain the untrained Chinese troops in the subzero temperatures, the high command of the Indian army is preparing to go for the final kill by preparing its elite braveheart men to face the Chinese. The Chief of Army Staff,  General Manoj Mukund Naravane on Monday visited Ambala Cantonment to review the security and operational preparedness of Kharga Corps. The Army General was briefed by the General Officer Commanding Lt Gen SS Mahal and he later interacted with the formation Commanders.

Kharga Corps was raised on October 6, 1971, at Krishna Nagar in then East Pakistan in the prelude to the Bangladesh campaign and displayed unparalleled bravery in the operations for the liberation of Bangladesh. The Corps has always lived up to its emblem of Kharga, the mythical weapon of Goddess Kali, symbolizing the destruction of the enemy in the battlefield.

One of the most potent strike formations of the Army has evolved into a battle-hardened outfit over the years and has not only contributed immensely in enhancing the security of the next but also assisted the civil administration in times of need. The Kharga Corps had recently celebrated its 50th Raising Day with a wreath-laying ceremony at the Vijay Smarak War Memorial in Ambala Cantonment.

The meeting of Naravane with the elite regiment is being seen as a sign that the Indian Army is looking to deploy the unit to take apart the insipid Chinese troops.

However, it will not be the first time that India has unleashed its most potent and dangerous army wing to take on the wussies of China. Reported by TFI, it was India’s secretive Special Frontier Force (SFF) that had undertaken a pre-emptive strike against the Chinese PLA at Eastern Ladakh where China was stepping up its salami-slicing tactics and military buildup.

India had managed to capture key heights and positions which so far have given the Indian forces a strategic advantage in the Pangong Tso frontier, as China’s unprecedented military buildup and provocations have lasted for months.

The recent clashes between India and China show that Beijing’s fears of losing occupied Indian territories are coming true. China’s attempt to change the ‘status quo’ has been met with an effective and strong response.

The Union Government is taking no prisoners and has given the free hand to the army to formulate its own strategy. And so far the army has been effective and quick in its response. The Chinese won’t survive along the Line of Actual Control in Ladakh for the next few months, leave alone fight a battle in the region against the well-acclimatized soldiers of India. The misery of the Chinese troops will be compounded if it is made to face SFF again or this time the Kharga corps.

According to reports, large numbers of Chinese PLA troops are being rescued and replaced from the frontline in Eastern Ladakh. TFI has already reported extensively on the fact that in the absence of acclimatization and required levels of courage, complemented with the fear of the Indian Army, Chinese soldiers were seen being stretchered off to a medical facility from the Pangong Tso area recently.

The alarm bells must have been sent ringing across the politburo of Beijing as soon as the ominous news of Naravane meeting Kharga Corps would have reached Xi Jinping and his lackeys.

With every passing day, the Chinese PLA is getting buried deeper and deeper in Ladakh snow