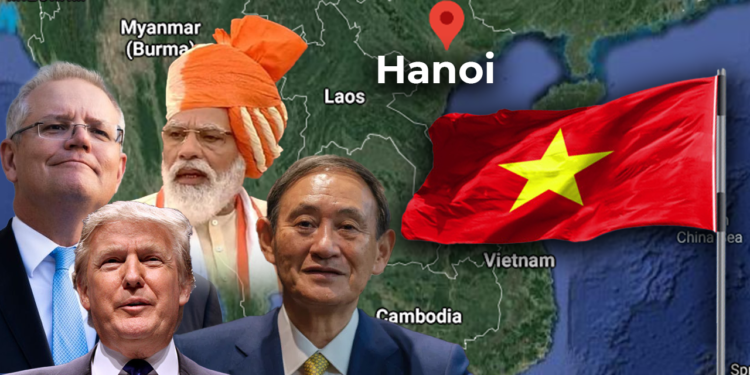 As the Quad seems to be heading towards eventual formalisation in order to rein in China in the Indo-Pacific region, it is being expected that the security forum that presently consists of Japan, India, the US and Australia would ultimately move towards extension. And it seems Quad extension will have to start from Southeast Asia- the hotspot of the Indo-Pacific region where China is bullying every Southeast Asian nation that has a territorial stake in the South China Sea.

And as the Quad moves ahead to realise its vision of a free and open Indo-Pacific, free from Chinese belligerence in the South China Sea, it seems that the Quad is invariably warming up to Hanoi. Vietnam, the fastest-growing ASEAN economy, is becoming the hub of Quad’s anti-China activity due to its increasing economic influence, bitter past with Beijing and most importantly, its present intent to take on the paper dragon.

Recently, for example, Japan’s newly-elected Prime Minister Yoshihide Suga chose Vietnam and Indonesia for his first overseas visit. The Japanese PM met his Vietnamese counterpart, Nguyen Xuan Phuc on Monday. The two leaders agreed to cooperate on a number of issues, including growing Chinese belligerence in the South China Sea.

Suga did not shy away in underscoring Vietnam’s role as a “cornerstone” of efforts being put in realising a free and open Indo-Pacific. The Japanese PM also said that the two countries have agreed in principle on a military agreement which would allow Tokyo to sell defence equipment and technology, including patrol planes and radar, to the Southeast Asian nation.

Suga is really strengthening the Japan-Vietnam alliance that had started gathering steam during the incumbent Japanese PM’s predecessor Shinzo Abe’s reign itself. When Tokyo started incentivising its manufacturing giants to shift production out of China to other countries, most of the Japanese companies moving to new foreign locations away from China chose Vietnam.

And then Japan is not the only Quad member warming up to Vietnam. Take the United States of America, for example. Earlier this year, Vietnam and the US inked a Memorandum of Understanding (MoU) which includes support for Vietnamese fishermen against illegal “intimidation” in the disputed waters of the South China Sea.

Moreover, Vietnam is also slated to receive a second US Coast Guard cutter this year so that it can match the Chinese build-up in the South China Sea. Washington is rewarding Hanoi because the White House understands that Vietnam is an unavoidable ally in the Trump administration’s relentless assault against China.

As for India, New Delhi has shown the intent to embrace iron brotherhood with Vietnam given the common Chinese security threat faced by both countries.

And Vietnam often uses this diplomatic leverage. Earlier this year, Vietnamese Ambassador to India, Pham Sanh Chau, made a ‘courtesy call’ to India’s Foreign Secretary Harsh Shringla after China deployed its H-6 bomber to the Woody Island- the largest island in the Paracel Island chain. Chau went ahead to express his country’s desire for a “Strong Comprehensive Strategic Partnership” with India.

Finally, Australia and Vietnam are already in agreement to keep Chinese expansionism in check within the South China Sea. Every QUAD member is thus looking to warm up to Hanoi and draft a deeper security alliance with Vietnam.

The QUAD is giving money and muscle to Vietnam so that Hanoi can beat back the Middle Kingdom in the South China Sea. Vietnam itself has a history of acrimony against China. In 1979, China was thrashed by the Vietnamese military, which foiled Beijing’s plans of invading its country.

And now all that hate is coming back into the Sino-Vietnamese relationship, as Beijing tries to take control of the entire South China Sea. While other ASEAN members have either not shown much intent to go beyond words and act against China or have simply ended up swinging between the US and China, Hanoi is the only power that has shown the intent to take on the paper dragon.

Vietnam is becoming the headquarters of Quad’s anti-China operations. And as such, it seems that Hanoi is going to be the one wearing down Beijing in the South China Sea.