Finland, China’s all-weather ally in Europe, has dumped it very openly as US steps in 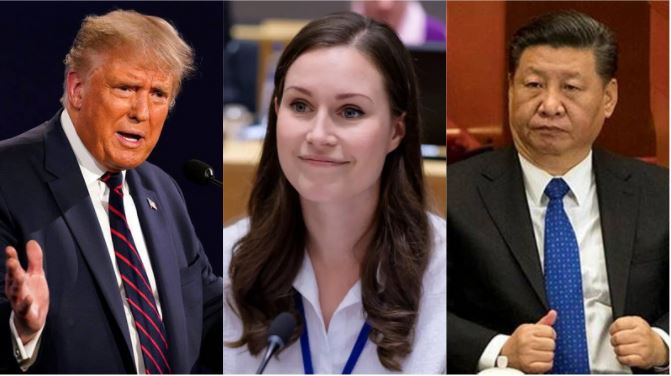 US President Donald Trump has snatched another country away from Chinese influence. And this time we are not talking about any exotic Pacific Island, but Finland- a cold, Arctic nation located in Northern Europe that used to be close Chinese partner not very long ago. The Chinese State media and diplomats used to hail China-Finland ties, and Helsinki-Beijing cooperation is often seen as the fulcrum of China’s Europe policy. However, things seem to be changing now.

Finland is situated thousands of miles away from China, yet Beijing considers the Scandinavian nation an important part of its global domination ambitions. But China is up for a major diplomatic shock as last week Helsinki decided to suspend its extradition treaty with Hong Kong. This is going to hurt the paper dragon that much more, as there are clear markings of US diplomatic powerplay in deteriorating Sino-Finland ties.

The Chinese Embassy was clearly left shellshocked after Finnish President Sauli Niinistö announced the formal decision to suspend the Hong Kong extradition treaty last Friday. Chinese diplomats do not really understand how to handle a delicate diplomatic situation and tend to lose their grip almost instantly. Finland was no exception. The Chinese Embassy issued a statement on Friday that sounded more like a threat than an attempt to save China-Finland relations from further deterioration.

The Chinese Embassy in Helsinki said, “Concerning the decision of the Finnish side, the Chinese side expresses grave concern and strong opposition.” It added, “Hong Kong is a special administrative region of China. Hong Kong affairs are entirely China’s internal affairs, and allow no foreign interference.”

The Chinese Embassy also said, “The Chinese side urges the Finnish side to abide by the international law and the basic norms governing international relations, stop interfering in Hong Kong affairs and China’s internal affairs in any forms to avoid harms to China-Finland relations.”

China is quite clearly getting frustrated by how Helsinki seems to be slipping out of its hands. And the White House seems to be the one taking Finland away from it. Yle, Finland’s national public broadcasting company, reported in July that as per a researcher the US was “aiming to influence Finland’s ties with China.”

This should have sent warning bells ringing for the Xi Jinping administration in China. Jyrki Kallio, a researcher at the Finnish Institute of International Affairs (FIIA) was quoted by Yle as saying, “There have been observations in Finland too that the people from the United States have come here to hold discussions.”

Kallio and his colleague Bart Gaens also wrote about the US role in a paper published in the European Think-Tank Network on China (ETNC). The Finland segment of the report suggested that American pressure was working. The researchers claimed that the Finnish government, municipalities and universities began to see China as more of a threat than an opportunity.

The researchers even spoke of panic regarding China and claimed that it was attributable, in part, to the United States of America. Kallio said, “Small players such as municipalities, businesses and universities are much more likely to be scared off by pressure if they encounter it.”

He added, “It is known that the US embassy has visited a university in Finland and called on it not to increase cooperation with China. It is unprecedented.”

Be that as it may, the Trump administration has been trying to bolster American cooperation with Finland. Earlier this month, the Pentagon went on to announce that the State Department has approved the potential sale of American fighter jets and precision-guided munitions to Finland, even as the Northern European nation prepares to modernise its military.

As the US tried to warm up to Helsinki, China did try to hold on to Finland. The US announced approval for a possible sale of fighter jets to Finland on October 9. Merely three days later, Chinese Ambassador to Finland Chen Li wrote an unimpressive commentary about China-Finland relations in CCP mouthpiece Global Times.

The Global Times story titled, “China-Finland ties show strong resilience even in hard times,” tried hard to argue how “China-Finland cooperation under the Belt and Road Initiative has been developing steadily.” Writing for Global Times, Chen Li also made a desperate offer to Helsinki and claimed, “China will provide opportunities for Finland to recover from the pandemic.”

However, Finland decided to suspend the Hong Kong extradition agreement, merely days after Chen Li’s desperate attempt to salvage China-Finland ties. The US has therefore once again humiliated China- this time in Finland.