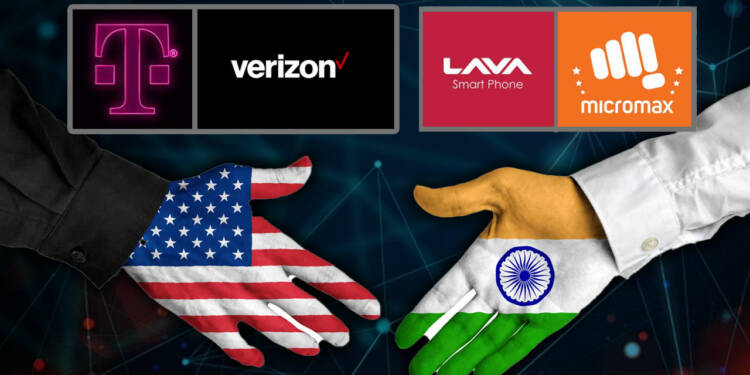 For decades, India has exported software solutions to the United States and many other countries around the world. But at the same time, India imports hardware equipment worth billions of dollars from China and other East Asian countries.

In the last few years, the Modi government incentivized domestic manufacturing, but without much success in any sector except Smartphones, and that too for the Chinese companies. The domestic electronics market is still dominated by Chinese companies whether the product is manufactured in India or China.

But, the Coronavirus induced disruption in the supply chain has given the opportunity to Indian manufacturers for producing goods not only for Indian consumption but for exports too. And now, Indian low-cost Smartphone manufacturers Lava and Micromax will manufacture handsets for American consumers.

As per a report by business daily Livemint, American telecom operators–Verizon, T-Mobile, AT&T and Cricket Wireless (a sub-brand of AT&T)–are in talks with Lava and Micromax to source sub-200 dollars smartphones. Sub-200 dollars Smartphone segment constitutes around 30 per cent of the American market and is currently dominated by Chinese players TCL and ZTE.

“India and Vietnam are emerging as hubs of electronics manufacturing outside China, and Indian firms are well placed to produce devices for the American market,” said Rahul Sharma, co-founder of Micromax.

“This is a trickle, which can soon turn into a tide for the domestic electronics industry,” said a person aware of the development between Indian manufacturers and American telecom firms as per the report by Livemint. “Till some time ago, Indian companies weren’t even allowed to participate in the bidding process,” the person added.

Lava, one of the two key players which also receives Production Linked Incentive (PLI)- under the PLI scheme started by Ministry of Electronics and IT to encourage hardware manufacturing–of 4-6 per cent– is very optimistic about the deal.

“If the deals work out, it could be a nearly ₹2,000 crore per year opportunity for the company in the near term,” said S.N. Rai, co-founder of Lava. “We have relevance in the entry-level segment as we have good confidence in the supply chain. Brands like Samsung and LG are making a killing in the high-end segment because of the ban on Chinese phone maker Huawei,” said Rai.

The American market is dominated by the Chinese manufacturers who produce even the Apple iPhone, although they get a small part of its total value. ‘Around 70 per cent of the 31.9 million smartphones shipped in the US last year were manufactured in China,’ reported Canalys. But, this is not sustainable now, given the disruption in the supply chain and severe restrictions on China in the last few months.

“Tensions between the US and China have escalated in recent years, creating a perpetual state of uncertainty for all smartphone vendors except Samsung and LG,” said Vincent Thielke, an analyst at Canalys.

For decades, China grew exponentially with active support from the United States and now the Donald Trump-led America is disarming Beijing’s biggest weapon– ‘manufacturing dependent robust economy’. The disruption in supply chain presents a golden opportunity for India, which, like China, possesses a large consumer base and cheap labour. If the country can capitalize on disruption in the supply chain, it would soon become “factory of the world”.

Finland, China’s all-weather ally in Europe, has dumped it very openly as US steps in

Nawaz Sharif could be back as the PM. Army could get its powers curtailed. And Imran could be a sacrificial lamb