After India and Japan, it’s Australia’s turn of QUAD diplomacy as it reaches out to Brunei 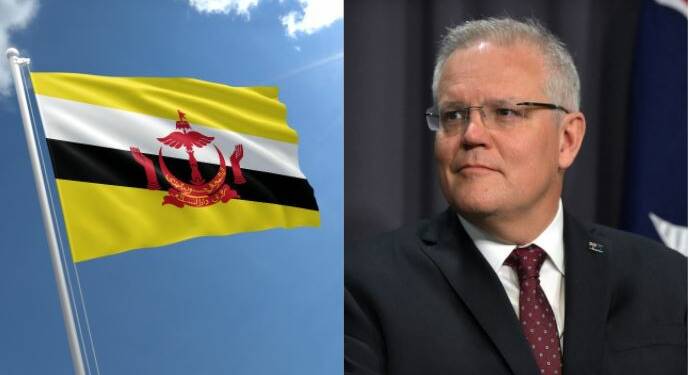 The QUAD is responding to Chinese belligerence and bullying which has become more evident since the second ministerial summit held in Tokyo last month. After the Indian government reached out to Myanmar and Japanese PM Yoshihide Suga visited Indonesia and Vietnam, it is Australia’s turn to play its cards. The Australian Defence Minister’s visit to Brunei seems to be in line with the larger QUAD designs.

Canberra has become more vocal and active compared to its previously passive stance. The Australian Defence Minister Linda Reynolds has visited Brunei between her trip to Singapore & Philippines. Normally, the visit would not have garnered much attention, but, given the sudden surge in geopolitical activities in the Indo-Pacific region, coupled with the fact that it is the pandemic season means that Canberra is giving serious precedence to its defence ties with Brunei Darussalam.

Minister Reynolds held comprehensive discussions with the Sultan of Brunei Darussalam, His Majesty Hassanal Bolkiah, and the Second Minister of Defence, Pehin Halbi. The two nations committed to strengthening defence ties, but the major attraction was the announcement that Australia will establish a resident defence adviser position in Brunei, which will be effective starting 2021.

This is a significant development in the Australia-Brunei defence and security relationship and has an overarching effect on the entire region. The current chairmanship of ASEAN is in the hands of Vietnam. It being a challenger to Chinese bullying and illegal claims in the South China Sea has put the quad in an advantageous position. The current counter-aggressive posturing that Australia, India, Japan and the USA can do is partly possible because of silent ASEAN support under Vietnamese leadership.

As the chairmanship of ASEAN moves to Brunei next year in 2021, it becomes important for one of the QUAD countries to reach out to it and provide Brunei with a security backing that can counterweigh Chinese intimidation and bullying. The prospects of which are very high given the country’s dependence on Oil & Gas export which can be compromised if China is not contained.

Brunei has its concerns regarding the South China Sea. It has long remained a silent claimant in the dispute. However, in an unprecedented move, Brunei’s foreign ministry released a statement in July, stating that, “Brunei Darussalam emphasizes that such negotiations on the South China Sea should be resolved in accordance with the 1982 United Nations Convention on the Law of the Sea (UNCLOS), and the rules and principles of international law.”

As Brunei has broken its long-maintained silence, the Australian visit to Brunei should be seen in the broader context of QUAD. It has been rightly claimed by many analysts that all the quad member countries recognize the ASEAN centrality in the Indo-Pacific region. And the fact that Brunei Darussalam will be heading the ASEAN next year, Australian Defense Minister’s visit makes all the more sense.

Australia is not alone in this, and as the broader events are panning out, it seems the recent actions by India, Japan and now Australia are part of a coordinated QUAD effort in the ASEAN region. If we consider the upcoming visit of US Secretary of State Mike Pompeo to Sri Lanka and Maldives, we can say that the QUAD countries are acting in unison to counter the growing Chinese influence in the Indo-Pacific region.

Read more: The India-China flip-flops of Sri Lanka are bound to end soon as the US makes an entry after years of silence

The Indian government has recently gifted one Kilo-class Submarine to Myanmar. This action by India, when combined with the big Infrastructure and connectivity push by Prime Minister Narendra Modi towards the South East Asian countries of Myanmar and Thailand under the Look East policy, becomes a big headache for Chinese plans to circle India.

On the other hand, Japanese Prime Minister visited Indonesia and Vietnam and has signed MoUs for sale of Defense equipment among other things. The visit also had a big symbolic value, as Suga’s first foreign visit as PM was to the two major ASEAN countries. He has even made remarks targeting Communist China’s bullying, but, without naming anyone.

Read more: Japan openly provoked China but Xi chose to stay mum. There are 4 reasons for it

As October is ebbing to an end, we can see the coordinated efforts of QUAD members to counter Chinese designs of hegemony picking pace. The most obvious sign of this is the use of a common phrase “efforts to maintain the free and open Indo-Pacific”. Be it the unilateral statement of the QUAD members or the bilateral statements of any quad country.

The efficiency of the coordination is visible by the fact that no two QUAD countries are visiting and addressing the same ASEAN countries. When India is engaging Myanmar, Japanese PM visits Indonesia and Vietnam, and at the same time Australian Defense Minister is on a visit of Singapore, Brunei and Philippines.

In these lines, Australian Defence Minister’s Brunei visit is very significant. Now all the stakeholders in the South China Sea, one way or another have counterbalanced Chinese influence by deepening ties with one of the four quad countries. This should send shivers down the spine of Xi Jinping, as the coordinated effort on the part of India, Japan, Australia and the USA is having so much impact without any formalization and institutionalization of QUAD.

The quad members are giving hope to the Indi-Pacific small & middle powers in the face of aggressive Chinese bullying. These countries are showcasing that in the face of coercion, cooperation strengthens. The defence agreement between Australia and Brunei will go a long way in bringing ASEAN and QUAD together.