China has dropped all pretence 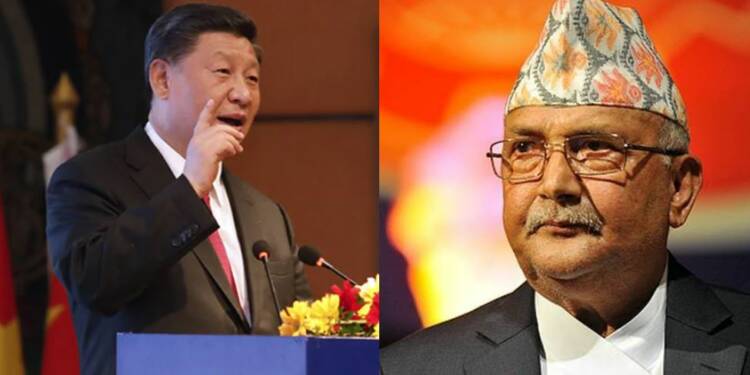 China has been grabbing Nepal’s land for quite a while now and the Oli administration has so far remained silent. In a latest report, Indian intelligence agencies have sounded alarm over Beijing’s land-grabbing activities and flagged that China is fast moving forward and encroaching more and more territories. This comes at the heels of Prime Minister Oli showing signs of mending ties with India, which has hit rock bottom over the past few months.

In light of Xi Jinping’s land grabbing and expansionist strategy, China has gone on to encroach the Nepalese territories in the areas of Gorkha, Darchula, Humla, Dolakha, Sindhupalchowk, Sankhuwasabha and Rasuwa.

It all started in June when China started to make inroads into the Nepalese territories, completely occupied the Rui village in Gorkha district and even removed the boundary pillars to legitimise its land grabbing. Also, China has occupied strategically significant areas at 11 places across the Nepalese territories and is engaged in diverting the course of rivers to increase its claims. The list of these territories was prepared by Nepal’s Survey Department of Agriculture. China has also been working in Tibet Autonomous Region for altering the course of rivers that flow into Nepal. A fortnight ago, in Namkha area of Humla district, Chinese security personnel even went to the extent of firing tear gas on a team of Nepali Congress leaders that was visiting the area for inspecting border incursions by China.

Reacting to this, Nepali Congress leader Jeevan Bahadur Shahi went on public to expose Chinese malpractices in the region. He explained that the Chinese had erected several constructions in the region on the pretext of ‘maintenance’ and they had never informed the local authorities of their activities. Shahi further went on to state that the area of Lapcha from where the Hindu pilgrimage Mansarovar is visible has also been occupied by China. In his interview with Nepalese TV Channel, Himalaya Television, Shahi alleged that the ruling Nepal Communist Party had literally surrendered territories to China.

According to Indian intelligence agencies, China has been continuing land grabbing in Nepal for quite some time. It went on to state that the Nepali Communist Party long has defended the expansionist agenda of the Chinese Communist Party. The agencies further reported that Nepal had further refrained itself from going ahead with border talks with China since 2005 as the Nepalese government didn’t want to irk China by reclaiming their lands. This gave China a free hand at blatantly harassing the local citizens and going to the extent of collecting taxes from the Nepali citizens that to within the Nepali territory, clearly indicative of the neo-imperialism of China that has been the backbone of china’s foreign policy in dealing with all countries whether be its adversaries or ‘friends’ like Pakistan.

It now seems that the Nepalese government is keen to mend the ties with India that had deteriorated after Nepal claimed Indian territories in its new map. With the Indian Chief of Army Staff, MM Narwane scheduled to visit Nepal on a three-day crucial visit starting on November 4, it is obvious that the Chinese threat will be discussed. This comes after the visit of RAW chief to the country that shows the ties of two neighbours are as important as ever and no intrusion in the friendly relations shall be tolerated. The visit also holds significant symbolic importance for the relations between the two and a clear indication for China that in practical world, money really cannot buy everything and it clearly cannot bray for the bullying.

It is clear that India shall be going ahead with expanding its overall ties with Nepal on the premise of its security interests being protected.

It is significant for Prime minister Oli’s politics as well, that he stands to lose more with submitting to an expansionist China than he gains. In accordance with that, he removed his pro-China defence minister Ishwar Pokharel. Oli is widely seen as the reason for the damage that occurred to the bilateral ties between two countries whose relations are as old as the mighty Himalayas. It was his decision to unilaterally amend the national map that showed Indian territories in it. Pokharel was the reason behind the provocative and unnecessary stance on the military relations between India and Nepal, under which Nepali soldiers are recruited in the Indian Army. Nepal in return receives remittances around $1 billion in salaries and an additional $800 million in pensions which is essential for its economy. Pokharel was also not on good terms with Nepal’s Army which prefers close relations with India. Another step by Oli to restore good bilateral ties India was the inclusion of the correct map of Nepal in his Vijaydashmi message to citizens of Nepal.

Hence with Oli realising his mistakes that he committed for petty gains, it is high time for India to deal with the issues involving Nepal in a careful manner and not let China to play the regional bully and threaten its neighbours.