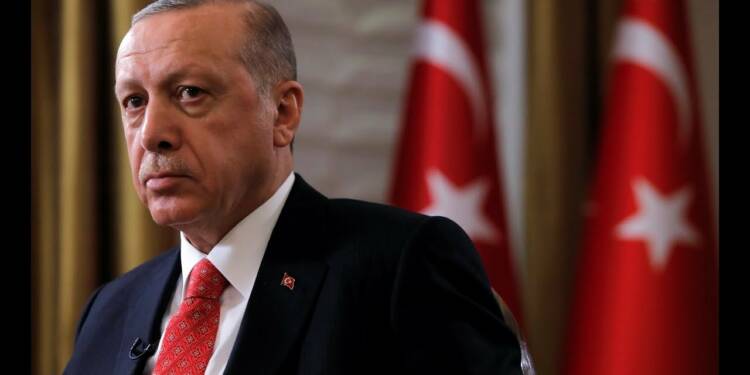 Turkey’s President Recep Tayyip Erdoğan is going bonkers in face of French President Emmanuel Macron’s crackdown on radical Islamist groups. Macron has started the ongoing crackdown following the gruesome beheading of a history teacher, Samuel Paty, for showing the Charlie Hebdo cartoons as an example of freedom of speech. But Turkish President and wannabe Caliph Erdoğan seems to have suffered a major meltdown.

He wants to punish France for taking a stand after Paty’s brutal murder, and therefore on Monday, Erdoğan asked his countrymen to boycott French goods. However, the boycott call has done harm to Turkey than to France. Turkish economy is already reeling under geopolitical tensions and conflicts. And the Turkish President’s French goods boycott call further saw the Turkish Lira hit a record low beyond 8.05 against the US Dollar on Monday.

Erdoğan has said that Macron has a problem with Muslims and needs mental health checks. The unsavoury remark has led to Paris recalling its Ambassador from Ankara. However, Erdoğan’s call to boycott French goods seems to show that it is not Macron, but the Turkish President who might have to re-assess his strategy.

Turkey’s Lira is already under a lot of stress in line with the general trend of a severe Turkish economic collapse. Erdoğan has got Turkey trapped into way too many conflicts from Libya to Syria, Eastern Mediterranean and even Nagorno-Karabakh, and the consequences are showing in the form of a weak currency, high inflation and declining investments.

And then, Erdoğan’s diplomatic stand-offs with the US President Donald Trump and the Russian President Vladimir Putin have hurt the Turkish economy even more profoundly. Yet, the Turkish President doesn’t seem to be even contemplating a real solution for the economic crisis. He has been whipping up false enthusiasm about so-called Turkish gas reserves in order to ensure that his utterly communal and populist brand of politics remains unscathed.

Owing to Erdoğan’s bizarre policies and multiple wars, the Turkish Lira has already lost 26 per cent of its value this year. However, Turkey’s economy now seems headed for yet another severe jolt as Erdoğan tries to cross swords with his French counterpart.

A local bank forex trader has been quoted by Al Jazeera as saying, “The rising geopolitical tensions with the USA and EU are new sources of pressure weakening the lira. The other main elements are the questioning of monetary policy credibility and the adequacy of the lira yield.”

Even apart from Lira, Turkey’s Dollar-dominated government bonds too have fallen by as much as 1.4 per cent, while the main Istanbul share index has also declined by 1.2 per cent.

Turkey’s geopolitical spats have made it an undesirable destination from an investor’s perspective too. Foreign investors are not ready to park their funds in the Islamist country, because there is no certainty as to when the Turkish President might drag his country into another war, inviting sanctions from powers like the US and the EU.

And now, Erdoğan’s French goods boycott call is going to take away that many more investors and companies away from Turkey. The Turkish President is destroying his country’s economy bit-by-bit. Erdoğan can advise mental health checks to his French counterpart, but the way the Turkish President is destroying the Turkish economy seems to show that it isn’t really Macron who needs mental checks.