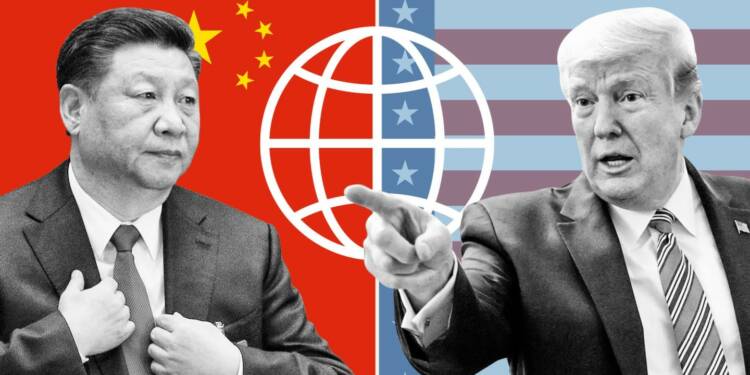 China’s days of expansionist and coercive policies seem to be over as the US gets ready for war.

What started as a fiery trade war has now escalated into a full-blown hostile build-up around Chinese territory. The United States has upped the ante on its Indo-pacific policy and China is rattled. First Taiwan, then the Senkaku Islands, and now Ladakh, the US’s threats to China are not so hollow anymore.

The commander of US forces in Japan on Monday made a direct remark about delivering combat troops to defend the Senkaku Islands. US secretary of state Mike Pompeo visited India and showered it with support to deal with any threat. Furthermore, the US also decided to go ahead with another major defence sale to Taiwan. And in another major move, The US has decided to deploy Coast Guard patrol ships in the western pacific region to counter China’s “destabilizing and malign” in the region.

Decisions and actions of such velocity, so quickly after the other, surely would’ve sent alarm bells ringing in Beijing. The US has increased its ferociousness in tackling China and now has backed its words with actions on the ground.

The commander of US forces in Japan, Lieutenant General Kevin Schneider said:  “The capabilities of Japan’s Self-Défense Forces and the US military can be used to deliver combat troops to defend the Senkaku Islands in the East China Sea.” He added “US military and Japan’s SDF are working to “develop new and better ways to operate and further integrate exercises like this one.”

This is a clear indication of the readiness of the US forces to defend the Japanese claim over the island from Chinese interferences who also claim the chain of islands in the region. Officials from Japan’s Défense ministry view this as a clear warning to China, who has been stepping up its activities near the Senkaku islands in a bid to shore up its claims.

The statement came just a day before US Secretary of state Mike Pompeo visited India and delivered open warnings to Chinese Intrusion activities on the Indian territory, after paying respect to the soldiers who were martyred in the clash in Galwan Valley,

Mike Pompeo said: “The US will stand with India in its efforts to defend its sovereignty and its liberty… Our nations are committed to working together into expanding our partnerships across many fronts.”

Pompeo strongly denounced China and its ruling Chinese Communist Party and criticized them for their role in handling the coronavirus pandemic that came from Wuhan. Unfiltered, and with true support to India, he further criticized the authoritarian CCP.

He said: “Our leaders and our citizens see with increasing clarity that the Chinese Communist Party is no friend to democracy, the rule of law, transparency nor the freedom of navigation, the foundation of a free and open and prosperous Indo-Pacific. I’m glad to say India and the US are taking all steps to strengthen cooperation against all threats and not just those posed by the CCP”

Also Read: US will provide any support to India as ‘deterrence’ against China: Pompeo

On the same day, the US announced a sale worth $2.4 billion of state-of-the-art Harpoon Coastal defence system to Taiwan. This was following the earlier $1.8 billion sales of defence equipment to Taipei.

The sale would further enhance the defence capability of the island. Taipei, under threat from the Chinese military invasion, thanked the United States and said the sale would “upgrade asymmetric warfare capabilities,” and would wipe the half of any invading force.

The defence sale to Taiwan comes after China warned the US to stop sending its warships in the Taiwan Strait. USS Barry, a guided-missile destroyer, passed through the strait as a routine drill, but this enraged China, which claims sovereignty over the islands. In addition to this, another incident of US spy planes on Taipei was confirmed by a USAF spokesperson. It was claimed that the flight did occur “as a part of an operation intelligence, surveillance, and reconnaissance mission”. Though later the statement was retracted.

These are small incidents compared to the tensions in the region, but they carry meaningful indications of the increased US desire to counter and contain Chinese influence in the region.

The United States decision to deploy Coast Guard Ships in the western Pacific to specifically counter China’s “illegal, unreported, and unregulated fishing and harassment of vessels operating in the exclusive economic zones of other countries in the Indo-Pacific” is another indication of the United States readiness to defend the common grounds against Chinese expansionist and coercive policies.

These moves will have a profound effect on any other Chinese expansionist ideas in the region. Furthermore, these actions will have a profound effect on China’s policies in concern to Taiwan, India, and the Senkaku Islands. China would want to avoid a full-blown war with the resurgent United States who has fully committed itself to maintain peace and stability in the Indo-Pacific and looks to smash Chinese insurgency on every front.