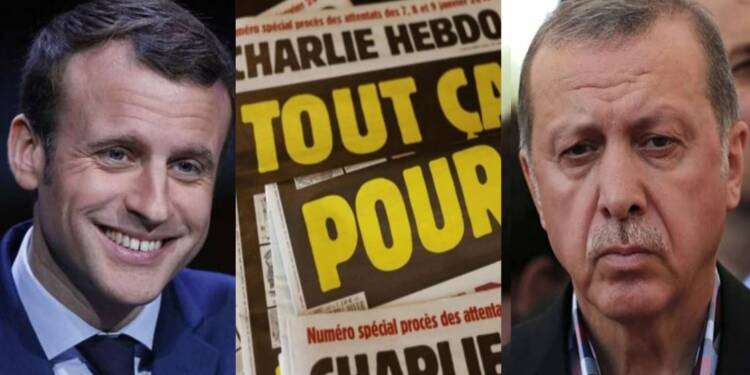 The feud between France and Turkey has reached another level. Erdogan has called Macron mentally unstable and is criticizing France attempts to rid the country of fundamentalist extremist Islamist ideology while defending Islamist terrorists, all in the same breath. And as this is going on, Charlie Hebdo has added fuel to the fire by publishing yet another cartoon, this time of Erdogan.

The French, under the leadership of Emmanuel Macron, are cracking down on the Fundamentalist Islamists after the whole country is angered by the beheading of a history teacher Samuel Paty by Islamist terrorists for showing the cartoons of Charlie Hebdo. This has led to the biggest ever crackdown on terrorists and Islamists, be it in ghettos or madrasas.

All these actions by France have irked Erdogan, who has led a massive misinformation campaign against France and has also used derogatory language against President Emmanuel Macron. However, Macron has not been deterred by any of this and has stated again and again that he will safeguard the French commitment to Equality, Liberty and Fraternity, out of which liberty is under attack. In a tweet, he said, “Freedom, we cherish it; equality, we guarantee it; fraternity, we live it with intensity. Nothing will make us back down, ever.”

All of these events have an epicentre, and that is Charlie Hebdo. It is a weekly satirical magazine featuring cartoons, reports, polemics and jokes. The magazine had published a portrait of Muhammad as the cover of its November 3, 2011 edition and just after the office of the magazine was firebombed. It was later on 7th January 2015, when two Islamist terrorists entered the office of Charlie Hebdo and started shooting. When this ended, 12 people were killed and 11 were injured. It was followed by several other attacks between 7th-9th January which included the Hypercacher kosher supermarket siege where a terrorist-held 19 hostages and killed four of them. All of this ended on the 9th when remaining terrorists were neutralised, but it created a wave of support for the magazine.

It was as if the whole country was united and the world was grieving with the French people, and on 11th January millions of people throughout France joined in mourning the dead and the march was called rally of national unity. It was one of a kind event and from the looks of it, the beheading of the history teacher has resurfaced the emotions and scars of French people.

The French have a deep connection with the three words of Liberty, Equality and Fraternity. These are the same demands over which the French had revolted in 1789. Thus, they cherish these rights and right to freedom of expression being one of them means they do not care about the political correctness that has engulfed this whole world.

The Islamists are not able to use the same logic with French which they have used in India and elsewhere for long and it has irked the terrorist capitals of Turkey and Pakistan. They cannot fathom that logic still prevails even though they have sold Islamophobia so aggressively. The very fact that Turkey had not condemned the beheading of Samuel Paty but condemned the people who are fighting against extremist Islamists is the epitome of hypocrisy.

Erdogan is bad-mouthing those who are trying to save other people from suffering the same fate as Samuel Paty. Basically, he wants to say that Islamists and fundamentalists have a license to kill, behead, massacre people but if you take counteractions, then you are an Islamophobe and worth every abuse.

Thus, Charlie Hebdo chose its platform for a cartoon on Erdogan depicting the levels of his hypocrisy. And as things stand, French President Emmanuel Macron has maintained his resolute support for the magazine, for free speech and the French ideals. He has even ignored the projection of Charlie Hebdo cartoons on the government building in Paris and has been cracking down on the madrassas as well as the parallel ghetto societies running throughout France.

In these hot geopolitical weather conditions, the Charlie Hebdo cartoon is sure to give burns to Erdogan and increase the heat too. Erdogan had earlier asked Turks to boycott French products and this time around Ankara has warned of serious diplomatic & legal steps over the comical depiction of Erdogan. On the other hand, France is encouraging European Union allies to take actions against Turkey. All of this is sure to escalate further and given the economic situation in Turkey, Ankara will likely lose big.