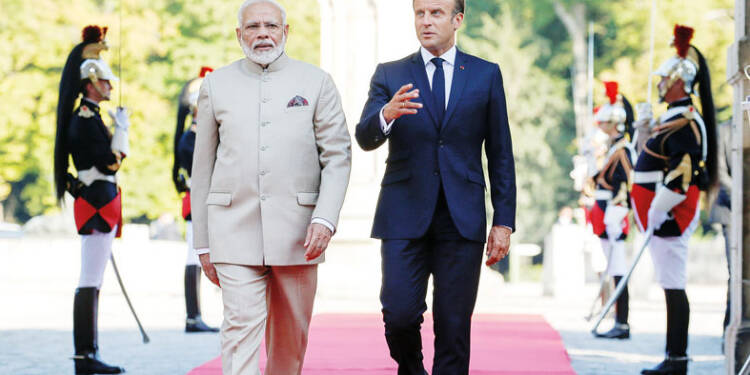 As the French are facing the brunt of Islamists fundamentalists and the misinformation campaigns by Turkey and Pakistan, India has made a significant foreign policy shift by officially coming out in support of France and President Emmanuel Macron. It is unprecedented because it is unlike earlier, when New Delhi used to make diplomatically non-partisan and non-substantial comments of maintaining peace.

France has been witnessing many terrorist attacks by Islamic fundamentalists for a long time, and the beheading of the 47-year-old history teacher by an extremist terrorist was the breaking point for the french people. As the whole of France went into mourning, President Emmanuel Macron without wasting any time started targeting the Islamist Fundamentalists.

Since then, the patron of Islamist Extremist Terrorists, Erdogan started criticizing Macron and even called him ‘mentally unstable’. A substantial number of Muslim countries started toeing Ankara’s line of arguments. And as all these attacks are continuing to mount on France, not many countries are coming directly in its support. This is why India officially coming out in support of France and condemning Erdogan without actually naming him is big news.

External Affairs Ministery’s press statement read, “We strongly deplore the personal attacks in unacceptable language on President Emmanuel Macron in violation of the most basic standards of international discourse. We also condemn the brutal terrorist attack that took the life of a French teacher in a gruesome manner that has shocked the world. We offer our condolences to his family and the people of France. There is no justification for terrorism for any reason or under any circumstance.”

It is the most upfront statement by any nation in support of France. This statement is in line with the TFI article, where we argued the need for India to come in support of France in the face of these attacks and bullying. There we also said that India should provide its expertise in anti-terrorist operations.

Read more: As France gets hounded by radical Islamist nations like Pakistan and Turkey, India must come to support it.

Indian Foreign Secretary Harsh Vardhan Shringla as part of his three nations tour is visiting France and this too is a signal of India-France not being deterred in the face of Islamist intimidation. India has categorically denounced personal attacks on the French President, and without naming Erdogan, India has criticized him.

However, this condemnation of terrorism and the message of solidarity with France should be backed by providing French with the needed assistance and advise for counter-terrorist operations. It is because the threat to France is only going to increase and signs of which have started to accumulate.

As France is still reeling from the beheading of Samuel Paty, today another terrorist attacked rocked the city of Nice. At a Church in Nice, a knife-wielding terrorist killed two people, women and a man as well as injured several others.

And if this was not enough, a knife attack led to the security guard at the French Embassy in Saudi Arabia got injured.

In addition to all these terror attacks, Turkish backed Free Syrian Army terror group, Jaysh al-Islam has called for an Islamist “jihad” in France. However, it looks like France under Emmanuel Macron is all set to take this to the finish. The government in Paris is all set to lead Europe by showing its credentials as a civilizational state. The land of Gauls, Louis XIV, Napoleon Bonapart is too proud to back down in front of these provocations and attacks.

The French hold the right to freedom of expression in very high regard and if history is a teacher then they never seem to let anyone threaten these values without consequences.

In an unprecedented move, India has come out of its shell of being a fence-sitter. In the fight against Islamist extremism, France needs the help of India. As India has a long history of successfully dealing with extremists, this experience can be helpful for the French security agencies. Given the increasing alignment between India and France, these steps may become the very next plan of action.