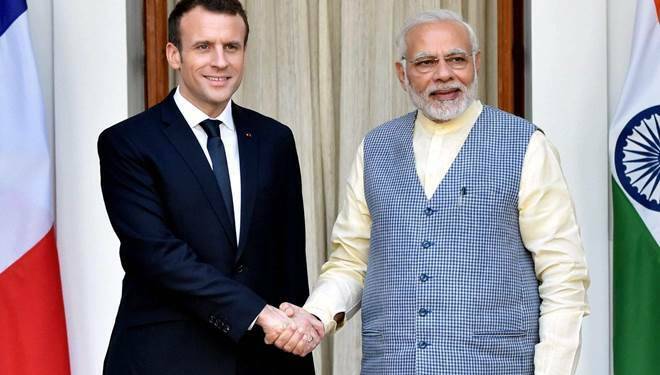 The French are taking on radical Islam and President Emmanuel Macron is at the forefront of it, leading his people as a real leader should.  Since the French are taking on the menace of radical Islamists, they are getting hounded and boycotted. And at the forefront of this movement are the safe havens of radical Islamists, that are Turkey and Pakistan. At a point like this, India should come to the support of France being a fellow democracy and a strategic partner.

Both Turkey and Pakistan, who maintain extreme silence on the plight of Uighur Muslims are ganging up on France for taking on the Fundamentalist and Extremists sections of Islam. First, it was Erdogan who made derogatory comments on the French President, calling him mentally unstable which resulted in France calling back its envoy to Turkey. Then, the Pakistani Prime Minister Imran Khan too criticized France in a series of tweets. And now Islamabad has even called the French Ambassador to Pakistan for raising the issue.

India is one of the countries which is the most adversely affected by the menace of Islamist extremism and for long has called for a universal definition of terrorists. Being a natural ally of France, India should put its weight behind it. France & India have a long history of partnership, be it the procurement of Dassault Mirage 2000s or now the Dassault Rafael Fighter Jet. France has always stood with India, and it was one of the few countries who resolutely backed India in India-China Himalayan stand-off. Interestingly, France was also one of the very few countries who did not sanction India post its 1998 Pokhran-II Nuclear Test.

India and France have a very coinciding interest in today’s world and being fellow civilizational states, they tend to see the world through a similar lens. These two countries are also working together in many fields, one of them being the solar energy. Both France and India are founding members of the International Solar Alliance.

France’s actions are being misrepresented, and the two terrorist states, Turkey and Pakistan are constantly trying to bully France. They are trying all different methods, for Pakistan, it has started acting as a Turkish IT cell and it is the reason behind trending boycott France on different social media platforms. Now, even Erdogan has called for the boycott of French products.

Pakistan and Turkey are now creating resentment against France among people of the Arab countries and Morocco too has come out criticizing President Emmanuel Macron. Islamabad has not only been acting as the Turk lackey, but it has been transporting terrorists all over the world. The terrorist caught for the stabbing incident in front of the old Charlie Hebdo office was also from Pakistan. And the rot is so deep that back home his family celebrated the incident.

As Turkey and Pakistan are transporting terrorists and extremist Islamist ideology in Europe and India, it is high time India came in support of France. India has dealt with Extremist Islamists for a long time, even going back to medieval times. And having such a long experience, India should join hands with France and help it in dealing with the menace of fundamentalists.

France is not deterred by the criticism from the mouth of the terrorist states themselves. Yet it needs like-minded countries who are the champions of free speech and fellow democracies to come together with France and make use of this opportunity to rid Europe from fundamentalism which has been cautiously spread by Turkey for a long time. This is why India should put all its weight behind France and provide the expertise that India has for France to tackle this more effectively.