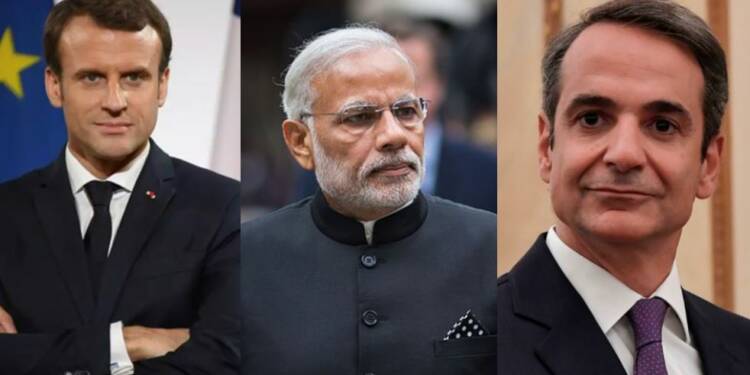 Turkey, under the reign of Erdogan, is fast losing friends. And as Turkey rakes up one hostile front after another, relationships among countries that disagree with Turkey are budding. One of them is India-Greece bilateral relations as the Foreign Ministers of two nations held a virtual meeting just a week after Greek Defence Minister Nikos Panagiotopoulos visited the Indian Embassy and emphasised the need for stepping up increased military ties.

The virtual meeting between the two Foreign Ministers came just after India criticised the terrorist attacks and the language used by Erdogan against French President Emmanuel Macron. The signals are obvious, India is building a concert of like-minded European countries to counter Turkish belligerence.

After last week’s meeting with the Indian Ambassador, Greek Defence Minister posted on Twitter, “Meeting with the Ambassador of India to Greece, Amrit Lugun, in the context of his ceremonial visit today to the Ministry of Foreign Affairs. We discussed issues of further deepening our bilateral relations in the defence sector and promote cooperation between the defence industries of our two countries.”

It was only a week after when Indian and Greek foreign ministers conducted the virtual bilateral meeting. This sudden increase in engagement can be interpreted in two ways, one, Indian EAM S. Jaishankar’s pivot towards Europe, two, as Turkey follows Pakistan’s modus Operandi by criticizing India at every international platform and exporting radicalism to Indian Muslims, India can and will take the fight to Turkey’s borders.

In the tweet after the meeting, Indian EAM S. Jaishankar said, “A very warm virtual meeting with Foreign Minister Nikos Dendias of Greece. Discussed building on our historical friendship through enhanced cooperation in commerce, technology and culture. The agenda covered our respective regional situations. Will work closely in the multilateral domain.”

It seems that India and Greece are coming closer given the presence of the common threat posed by Turkey led by Erdogan. Greece has been up in arms with its fellow NATO member Turkey on multiple issues. Turkey had earlier sent a research vessel Oruc Reis, as well as two auxiliary vessels in the waters of Cyprus and Greece, which after criticism, confrontation and the threat of sanctions from the European Union, it had to withdraw. Greece is also building a wall to close its border with Turkey to end the threat of refugees swarming the Greek borders. Other than this, the Greek Orthodox Church has asked countries to censure Turkey for turning the Hagia Sophia into a mosque which was the Church built by the Byzantine Empire.

Read more: Turkey, not China, will cause the third world war and Erdogan needs to be ousted to avert it.

Turkey has become the biggest exporter of extremism and Islamist fundamentalist ideology. The state media of Turkey has been going around spewing venom about India regarding Kashmir, making scathing charges out of thin air. The Indian security forces and security agencies have flagged Turkey’s growing influence and its growing support for separatist activities in the Kashmir Valley. The Print had reported that several journalists from the Kashmir Valley are working for Turkish media networks or pursuing courses in Turkish universities, it includes two relatives of separatist leader Syed Ali Shah Gilani. Turkey is trying hard to influence the Muslims of Kashmir towards Fundamentalism with its media and money. The success of a fictional TV series Ertugrul gives us the depth of influence Ankara is gaining in Kashmir.

As Turkey is becoming a replica of Pakistan as far as propaganda & support for the Fundamentalist Islamist terrorists are concerned, India has shed its herbivorous attitude of just taking the hits. New Delhi is now trying to work closely with countries of Eastern Europe and the miffed neighbours of Turkey to corner Ankara in its own backyard.

Erdogan is trying to rake up the ghost of the Ottoman Empire and become the leader of the Muslim world. At the same time, India and Greece have emphasised the significance of the historic friendship of Indian & Greek civilisations and talked about building bilateral ties on those roots.

I strongly condemn the recent terrorist attacks in France, including today's heinous attack in Nice inside a church. Our deepest and heartfelt condolences to the families of the victims and the people of France. India stands with France in the fight against terrorism.

Even Prime Minister Modi has come to the support of France against terrorism, validating Macron’s fight against Islamism and sending a strong message to Turkey, which has been badmouthing Macron for taking a stand against Islamists.

Be it the criticism of Erdogan for using crass language against Emmanuel Macron or support for France against Islamist Terrorism, India has been showing Ankara what can be the cost of angering New Delhi. The latest developments in the India-Greece relationships are an addition to the Indian policy to encircle Turkey in its own neighbourhood. The move is significant because it makes India a player in the Eastern Mediterranean Sea and Europe’s fight against the Islamism percolating from Turkey.