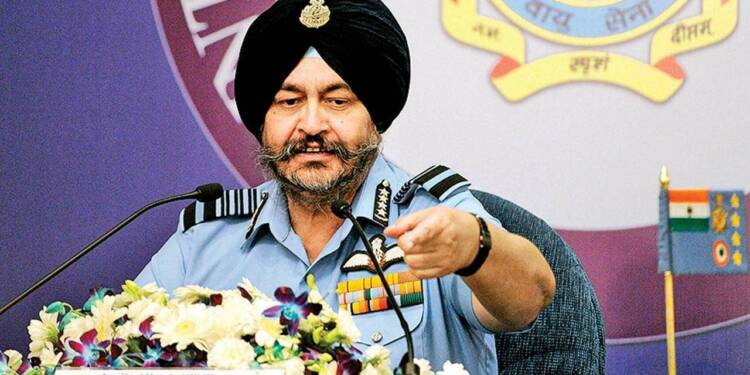 In a sensational disclosure, India’s former Air Chief Marshall BS Dhanoa, who was heading the Indian Air Force and was at the helm of the Balakot airstrikes in Pakistan in 2019 has revealed that India was all set to wipe out Pakistan’s forward positions and brigade installations post Pakistan’s failed attempt at targeting Indian military assets on 27 February 2019.

Pakistan had sent a package of its fighter aircraft to target Indian military assets and installations after India conducted its covert and precision-strikes against terror camps in Pakistan’s Balakot. Despite claiming that the Indian Air Force had uprooted only a few trees in Balakot, Pakistan was willing to initiate a war as it took to launch a failed aerial offensive against India.

During the dogfight between Indian and Pakistani fighter jets on February 27th last year, Wing Commander Abhinandan Varthaman was captured by the Pakistani military when the MiG-21 he was flying was shot down by a Pakistani missile, seconds after he had taken down a much-advanced F-16 aircraft. Going by Pakistan’s history in dealing with prisoners of war (PoWs), Indians no less than feared for the life of the captured Wing Commander, with little hope of him being returned. Yet, as per the former Air Chief Marshall, if Wing Commander Abhinandan was not returned to India immediately, Pakistan stared at the prospect of getting its forward brigade installations wiped out, which would also mean that India would move in to reclaim Pakistan Occupied Kashmir and Gilgit Baltistan.

“There are two parts to it. The main pressure on Pakistan was diplomatic and political. But there was also a military posture, the way he (Mr Sadiq) is saying that ‘his legs (General Bajwa) were shaking and all’, it is because the military posture was very offensive of all the three services, Army, Navy, Air Force. And God forbid had they hit our installations on February 27, we were also in a position to wipe out their forward brigades.” said BS Dhanoa.

India had made it clear in no uncertain terms to Pakistan that if the captured Wing Commander was not returned safe and sound, Islamabad would be made to regret its very existence. India’s posturing and recent history with Pakistan had also gone a long way in convincing the military establishment of the terror state that New Delhi was in no way joking, and that things would go down pretty bad for them if the Wing Commander was not immediately released.

Speaking to the same effect, Pakistan Muslim League (Nawaz) leader Ayaz Sadiq said that the country’s Foreign Minister Shah Mahmood Qureshi in an important meeting back then had said that if Pakistan did not release Wing Commander Varthaman, India would attack Pakistan “that night by 9 pm.”

While recounting the events of the all-important meeting, Ayaz Sadiq said in the floor of Pakistan’s National Assembly, “I remember Shah Mahmood Qureshi was in the meeting in which (Prime Minister) Imran Khan had refused to attend and Chief of Army Staff General Bajwa came into the room, his legs were shaking and he was perspiring. Foreign Minister said for god’s sake let Abhinandan go, India’s about to attack Pakistan at 9 pm.”

Subsequent to the Pakistani MP making such sensational revelations, only a day later, Pakistan’s Science and Technology Minister and a close aide of Prime Minister Imran Khan admitted to Pakistan, orchestrating the dastardly Pulwama terror attack in 2019, which resulted in the deaths of 40 Indian paramilitary soldiers. In the floor of the parliament, the senior Pakistani Minister said, “We hit India by entering their home. Our success in Pulwama, is a success of this nation under the leadership of Imran Khan. You and us are all part of that success.”

Earlier last year, in a televised interview, on being asked as to how he ensured the safe return of Wing Commander Abhinandan, India’s Prime Minister Narendra Modi with a smirk said, “that particular night was full of secrets, and it would be best for those secrets to be kept as secrets.”

This serves as a testimony to the fact that India would have gone for the jugular had the Wing Commander not been returned by Pakistan within a time limit set by New Delhi. Having freaked out and having their very existence as a nation threatened by India, Pakistan was forced to return Wing Commander Abhinandan, as demanded by New Delhi.