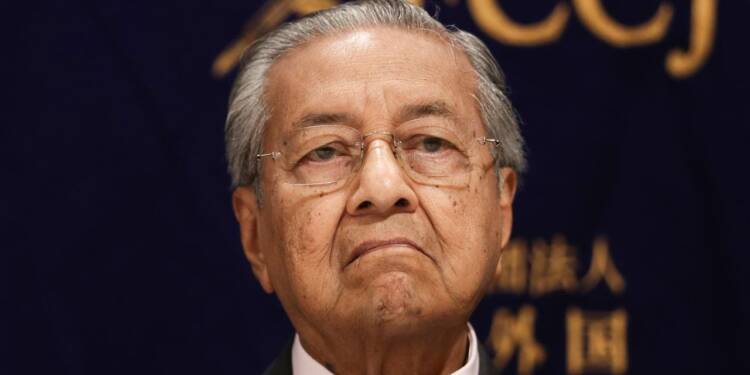 On Thursday, the world was stunned as former Malaysian Prime Minister and a man who has had a significant impact on Malaysian society – Mahathir Mohamad took to Twitter to give a clarion call for violence against millions of French people to be perpetuated. The comments by Mahathir came in the backdrop of Islamist terror attacks taking place across Europe, particularly in France. The world as a whole was stunned by the gruesome beheading of a school teacher in France by a 18-year old, only because he took to showing a cartoon on the Prophet Mohammed as a part of a lecture on freedom of speech and expression and its contours.

Mahathir Mohamad joined the international jihadi bandwagon of Islamist intellectuals and decision makers Thursday, and took to blatantly justifying the brutal beheading of the French teacher by a radicalised Islamist. In a way, having been made politically irrelevant and weak in Malaysia has visibly not served as an impediment for the 95-year old leader terror-sympathiser, who can be seen joining the club of leaders like Turkey’s Erdogan and Pakistan’s Imran Khan in furthering the cause of violent political Islam across the world.

“Muslims have a right to be angry and to kill millions of French people for the massacres of the past. But by and large the Muslims have not applied the ‘eye for an eye’ law. Muslims don’t. The French shouldn’t,” Mahathir said in a blog post, which he also posted on Twitter. He then added, “Since you have blamed all Muslims and the Muslims’ religion for what was done by one angry person, the Muslims have a right to punish the French,” he said. Subsequently, following global shock and outrage, Twitter removed the said tweet, although the remaining thread, which is in general toxic and misogynistic, no to mention particularly hateful towards the French people, remains. 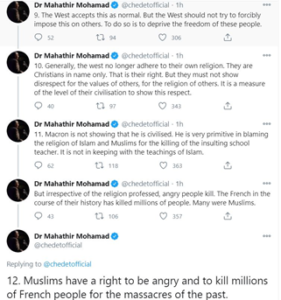 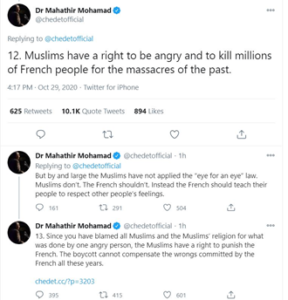 But irrespective of the religion professed, angry people kill. The French in the course of their history has killed millions of people. Many were Muslims.

Have no doubt, Mahathir Mohamad took to brazenly justifying acts of terror which are perpetrated not just on French soil, but across the world. Claiming supposed persecution of the Muslim community at the hands of the French in the past, Mahathir makes it seem like the Islamists are absolutely right to harbour hate and anger against the French and even taking to kill them in the most horrifying way possible. Freedom of speech and expression being an alien concept among so-called modern ‘Muslim leaders’ like him, Mahathir takes off for quite a jihadi and Islamist trajectory, one which would put even Pakistan’s Imran Khan to shame.

While Pakistan has officially spoken out against France and its President Emanuel Macron and even called for its economic boycott (like much of the Muslim world), what it has not done is officially spread hatred against the French people and justify their jihadi-styled beheadings. Mahathir Mohamad, with his tweets yesterday, seems to have overtaken Turkey’s rabidly-Islamist President Erdogan too. Erdogan, as is known already, has taken to instigate Muslims worldwide, particularly in Europe and France, so much so that yet again France was struck by Islamist terror yesterday.

A knife-wielding Islamist beheaded a woman and killed two others in a classic terrorist attack at a church (Basilica of Notre-Dame de Nice) in the French city of Nice on Thursday. The attack drew worldwide condemnation, even as a subsequent attacker was shot down by the police in Montfavet, near the southern French city of Avignon. He too, like the terrorist at Nice, was shouting “Allah hu Akbar” (Allah is greatest). In a third attack on the French in a single day, in Saudi Arabia on Thursday, it was reported by state television that a Saudi man had been arrested in the city of Jeddah after attacking and injuring a guard at the French consulate.

France, its President Emanuel Macron and the French people at large have effectively become the prime targets of Islamists, as Muslim leaders and influencers across the world take to spreading hatred against France, thereby instigating fanatics to indulge in killings sprees. Muslim leaders like Mahathir and Erdogan are not only instigating Islamists and spreading hatred against the French, but are also, by whitewashing their crimes against humanity, validating the violence perpetrated by such jihadis. When such violence and terror is validated, there is no stopping the common Muslim folk from easily getting radicalised and indulging in the same terror-activities which hardcore Islamists employ themselves with.

Comparatively, the Arab world seems to be doing a better job against terrorism and extremism than Malaysia and Turkey. As for countries like Pakistan, where terror is a major industry no less, it would be foolish to even expect them to behave humanly in their diplomatic approach to the world. When Mahathir says that the anger of the Muslims is leading them to kill French people, it does not take an intelligent guess to realise that the world is staring at the prospect of zealous fresh converts from nations east of the Arab world working wholeheartedly to normalise terrorism, Islamism and violent political fanaticism in the name of Islam. It therefore, becomes a need of the hour for the sensible world community to stand in solidarity with France, and support the French government’s crackdown on Islamists.